I present a list of Bollywood’s all time great classics which are very close to my heart. The list is bound to be subjective since I have to select a only a few out of hundreds. Besides, everybody can make his own list according to personal choice. Here comes my list of top ten masterpieces from Bollywood :

1. Pyaasa (1957) : Gurudutt read a poem – ‘Seven cities claimed Holmer dead through which the living Holmer begged his bread’. And he got the inspiration to make this movie which is not only one of the greatest movies of India but the world. Through the story of a Shaayar, Guru Dutt has portrayed the deterioration of values and ethics, the swiftly increasing selfishness overpowering everything else and the disenchantment from the Nehruvian idealism in the free India. This black and white movie is a classic example of cinematic excellence. Waheeda Rehman as Gulabo is adorable. The lyrics of Sahir, composed by S.D. Burman and sung by Rafi are hard-hitting. One song sung by Hemant Kumar – Jaane Woh Kaise Long The Jinke Pyar Ko Pyar Mila is also an immortal classic. 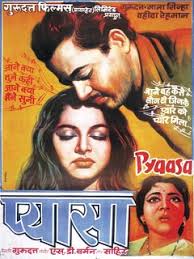 2. Khamoshi (1969) : This Rajesh Khanna-Waheeda Rehman starrer movie can be termed as the best of Waheeda’s career by any standards. A rare blend of psychology and a woman’s suppressed, untold emotions. The music of Hemant Kumar is enchanting with highly meaningful lyrics by Gulzar.

3. Taare Zameen Par (2007) : Aamir Khan’s masterpiece watching which I shed countless tears in the cinema hall. The highly sensitive story of the sentiments of a child suffering from dyslexia. A text book on child psychology. It stands with pride with the old classics of 50s, 60s and 70s.

4. Mother India (1957) : Mehbood Khan remade his own movie Aurat (1940) under the title Mother India with a big star cast and a grandeur immortalizing Nargis in the title role which starts from her teens and goes upto her 70s. Deserved an Oscar but the western jury could not grasp the soul of the Indian story and the Indian social values. Sunil Dutt also played the memorable role of Birju who is shot dead by his mother in the climax. 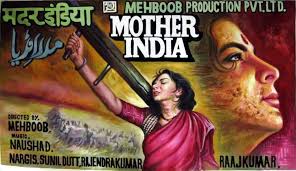 5. Haqeeqat (1964) : Chetan Anand’s classic which is inarguably the best war movie ever made in India. It’s the painful story of retreat of the Indian soldiers after the heart-piercing defeat in the China war of 1962. A tear-jerking saga with immortal music given by Madan Mohan. The song – Hoke Majboor Mujhe Usne Bhulaaya Hoga is my all time favourite Bollywood song, listening and watching which is the experience of a lifetime.

6. Sahib Bibi Aur Ghulam (1962) : Guru Dutt’s classic movie directed by Abrar Alvi, based on the novel of the same title authored by the legendary Bangla novelist Bimal Mitra. It presents a true picture of the deteriorating position of the landlords in 19th century Bengal and the social milieu of that period. Meena Kumari gave the performance of her life time in the immortal role of Chhoti Bahu. The songs in the voices of Geeta Dutt (Roy) are all time classics. Guru Dutt himself played the memorable role of Bhoot Nath in the movie.

7. Do Bigha Zamin (1953) : Bimal Roy’s classic movie on the plight of the poor Indian peasant destined to live and die in debt of the blood-sucking money-lenders. The heart-tearing saga was made lively on the screen with the outstanding performances of Balraaj Saahni and Nirupa Roy. 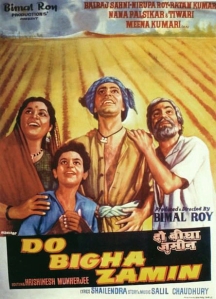 8. Mughal-e-Azam (1960) : The most grandiose movie of the Indian silver screen based on the Salim-Anarkali love saga, directed by K. Asif and acted by legends like Prithvi Raj Kapoor, Dilip Kumar and Madhubala. The music of Naushad is immortal the same way, the movie itself is.

9. Satyakaam (1969) : The hard-hitting realistic movie of Hrishikesh Mukherjee, baring the true face of the society and narrating the tragic destiny of a truthful and idealistic man in that. Dharmendra delivered a performance of his life time with Sharmila Tagore and Sanjeev Kumar ably supporting him. This movie is Hrishi Da’s best work by all means.

10. Kaagaz Ke Phool (1959) : A beautiful story which could not be told properly, a beautiful idol which could not be finished perfectly, a beautiful song which could not be sung properly; yet its greatness is beyond any argument. The last movie directed by Guru Dutt which was a flop but definitely the best movie made with the backdrop of the movie-world itself. Waqt Ne Kiya Kya Haseen Sitam is the immortal song which is the combined great effort of S.D. Burman, Kaifi Aazmi and Geeta Dutt whereas Bichhade Sabhi Baari Baari sung by Rafi is the song which bares the disgusting face of this selfish world and when played in the ending scene is simply tear-jerking. Guru-Waheeda chemistry is nothing short of amazing. The outstanding cinematography of V.K. Murthy is another highlight of this black and white movie. 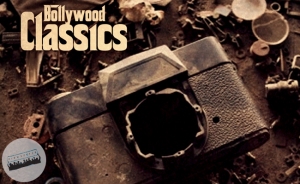 Other than these top ten, the following masterpieces from Bollywood are also mentionable :

1. 36 Chowringhee Lane (1981) : It’s not just a movie, it’s a pain-soaked poetry written on celluloid. A highly sensitive English movie by Aparna Sen, produced by Shashi Kapoor and acted by Jennifer Kendal (Kapoor) in the central role of a lonely lady with a superlative degree if sensitivity. 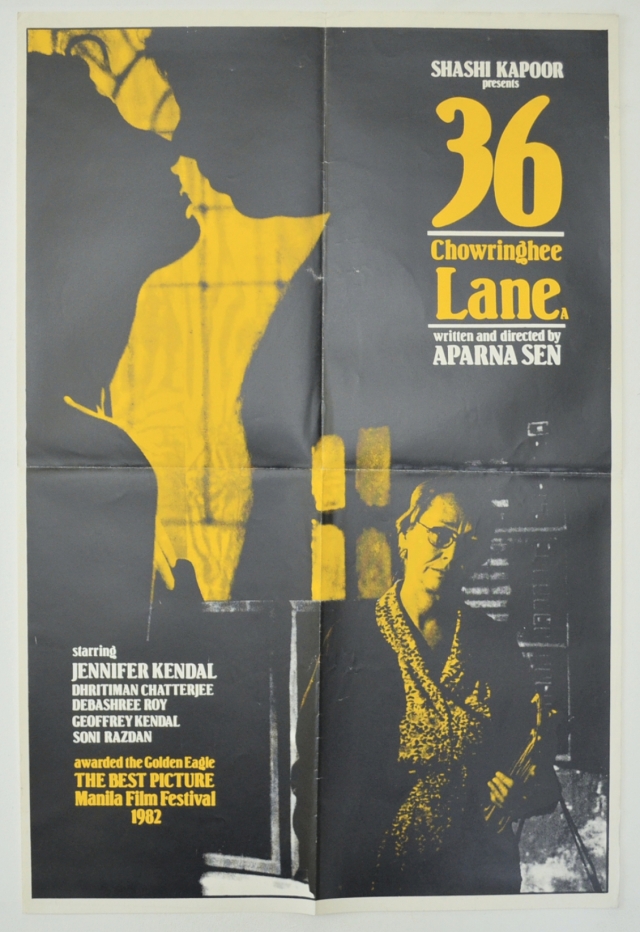 2. Parzania (2005) : Acted by Nasiruddin Shah, Sarika and others, it is perhaps the best movie on the communal hatred in India. Made with the backdrop of the Gujrat riots, the story is a quest for humanity and sensitivity in the wilderness of hatred and sin.

3. Jagte Raho (1956) : The most realistic movie from the prestigious R.K. banner of Bollywood, directed by Sombhu Mitra-Amit Maitra, showcasing the best ever performance of Raj Kapoor. The complete chain of events takes place in a residential complex and during one night only, baring the disgustful face of the hypocritical urban society.

4. Anand (1970) : Hrishi Da’s classic whose story is based on the never-say-die spirit of human-being who is going to die within a few months. Pronouncing affirmatively – Zindagi Zinda Dili Ka Naam Hai, the movie showcases the best ever performance of Rajesh Khanna in the lead role. The movie boasts of certain immortal songs in the voice of Mukesh, composed by Salil Chowdhury and penned by Yogesh. 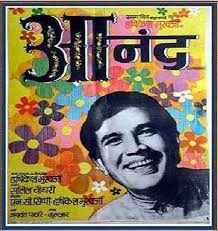 6. Umrao Jaan (1981) : The classic movie based on the novel of Mirza Haadi Ruswa, acted brilliantly by Rekha in the title role and made excellently by Muzaffar Ali. The team of Khayaam, Shahryar, Asha Bhosle and Talat Aziz created an everlasting musical aura.

7. Garm Hava (1974) : A touching movie on the plight of innocent Indian Muslims in the period just after partition when they were finding the surrounding milieu and the environment seemingly hostile to them and they were in a fix whether their decision of not leaving their country for Pakistan was right or wrong. The debut movie of Farooq Sheikh boasting of the best ever performance of Balraaj Saahni. This hard-hitting, sensitive and very very realistic movie was made by M.S. Sathyu. 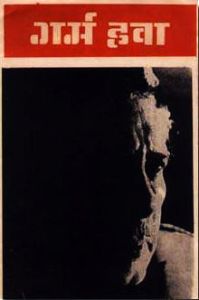 9. Gangaajal (2003) : Prakash Jha’s hard-hitting movie on the Indian police system, loosely inspired by an incident taken place in Bhagalpur in 1979 in which some policemen had blinded some suspects in the lock-up. Utterly realistic from the very first frame to the very last frame. A great performance by not only Ajay Devgan but the whole performing team.

10. Sholay (1975) : The greatest commercially successful movie whose characters, events and dialogues have become a part of the Indian folklore.

6 Responses to Bollywood classics very close to my heart