Posted on November 5, 2019 by Jitendra Mathur

First of all, I sincerely thank my friend and elder Mr. Thomas Dhavala for inspiring me to write a review of this emotional love story of the sixties which is still remembered for its great songs. Do Badan (1966) was the first movie seen by me on the big screen in Kolkata (then Calcutta) after moving to this metro city in 1988. I went to watch it with a lot of expectation because I was (and still am) very much impressed by its melodious and touching songs. And Do Badan lived upto my expectations.

Karva Chauth, the festival of the Indian (mainly Hindu) ladies fasting for the long life of their husbands is celebrated every year. Now what’s marriage ? Does the marriage of a male and female happen through rituals or legal procedure only ? My answer is – No. The marriage, in the real sense, happens in the hearts of a male and a female. I am writing a sentence in the Urdu language – JIS-SE MOHABBAT HOTI HAI, USI SE VAABASTAGI HOTI HAI AUR YE VAABASTAGI HI SHAADI HAI (you are emotionally associated to whom you love and this emotional bond itself is marriage). The hearts of a man and a woman can be married despite the non-performance of rituals (or legal formality). Do Badan is the story of such a pair only which could not tie the sacred knot in the eyes of the society but the love that had evolved in them for each other was eternal, transcending the limits of the bodies with merger of the souls.

Do Badan (two bodies) tells the story of college-mates turned lovers – Asha (Asha Parekh) and Vikas (Manoj Kumar). The difference between the statuses of Asha’s rich father and poor and orphan Vikas becomes an insurmountable wall in the path of their union. Vikas leaves Asha to earn money and become worthy in the eyes of her father to ask for her hand in marriage but his rival for Asha’s love, Ashwini (Pran) arranges an accident to get rid of him. Vikas survives but loses his eye-sight. Kind-hearted Dr. Anjali (Simi Grewal) serves him. On the other hand, Asha gets married to Ashwini under the wrong impression that Vikas is dead in the accident. However she is not able to love him like a wife as her emotions have died with Vikas. The twist in the tale comes when she sees Vikas singing in a party. What happens thereafter is very touching and the movie finally reaches its tragic climax, leaving a throbbing in the hearts of the viewers. 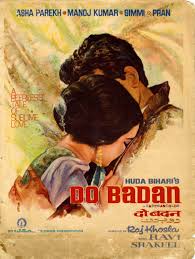 An acclaimed expert in directing suspense thrillers, Raj Khosla has excelled in the field of emotions too with Do Badan. The movie is quite interesting and the curiosity of the viewer has been well-maintained by the narrator. Despite Bollywood style twists and cinematic liberties in the narrative, the viewer is nowhere let down. Cinematography is good and the bright colours provide a cooling experience to the viewer’s eyes. Technically and production value wise, the movie is up to the mark. The length of the movie is also quite ok according to the norms of the sixties.

The lead pair was never considered a great performer. However in this emotion-packed movie, both have done well. Asha Parekh never got accolades for her performance but she was quite pretty and the thing for which I admire her is that she was able to develop good on-screen chemistry with every hero and that made up for her average acting. Manoj Kumar has also acted properly. The greatest ever villain of Bollywood, Pran has delivered a knock-out performance again. However the surprise packet of this movie is Simi Grewal who is simply lovable in the role of a kind-hearted lady doctor. She had won the Filmfare award for the best supporting actress for her performance in this movie.

The music of Do Badan is just marvellous with all the songs being memorable ones. The emotional lyrics of Shakeel Badayuni have been melodiously composed by Ravi. It contains three gems of Mohammed Rafi – Raha Gardishon Mein Har Dum, Naseeb Mein Jiske Jo Likha Tha and Bhari Duniya Mein Aakhir Dil Ko Samjhaane Kahaan Jaayen. It has Lata’s great sad song – Lo Aa Gayi Unki Yaad. It contains Asha’s teasing song – Matt Jaiyo Naukariya Chhod Ke. And above all, it contains – Jab Chali Thandi Hawa which is undoubtedly one of Asha’s most popular songs, a real classic in terms of the tune as well as in terms of the instrumental music in which tender words have been strung like fragrant flowers in a beautiful garland. This unforgettable song links the natural phenomena with human emotions in the most impressive manner. 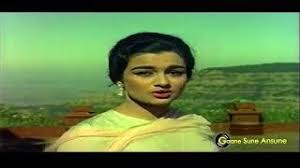 I had watched Do Badan in the Liberty Cinema situated at Girish Park, Kolkata (then Calcutta) on 14th October, 1988 and I am unfortunate that I am yet to watch it for the second time since then (though I watch the videos of its songs on internet). This touching love story is a treat to watch for the people liking emotional love stories and its great songs render it a repeat value for sure.