It made me a fan of Surendra Mohan Pathak

The readers of my reviews are well-aware that I am a great fan of Hindi novelist – Surendra Mohan Pathak. I had read my first novel written by this author in the eighties when my friend – Vishnu Mantri (who was his diehard fan) had given it to me with his high recommendation. That novel was titled as – Kaala Kaarnaama (the evil deed). I liked that novel but did not become S.M. Pathak’s fan just by reading that. After some time, I happened to read one more novel of this author which I liked so much that since then I have been a part of his worldwide spread fan-following. That (second) novel is being reviewed by me today which is titled as Khooni Haveli (the murderous mansion). 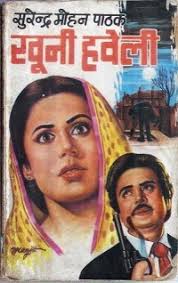 The novel is titled after the mansion (Haveli) which is a witness to some mysterious deaths taking place in the novel. However the milieu of the events of the novel is not just that mansion but a small town called Mahipaalpur situated at the sea-shore on one hand and near a thick, dangerous forest on the other. That forest falls between Mahipaalpur and the nearby metropolitan city.

The novel opens with a press reporter’s journey through the forest to Mahipaalpur to visit Damodar Raana who lives at his farm-house there and has got wounded in an encounter with a bull. On his way, he comes across the owner of the mansion (Haveli) – Vikram Singh and finds him a bit sullen and eccentric. Almost at the same hour, the thick forest echoes with the shriek of a woman whose reason becomes known later.

The main story starts with an amnesiac young man – Tarun Kumar’s approaching the mansion of Vikram Singh for employment in his household. He happens to meet Vikram, his sculptor wife – Neelam and his old but very loyal servant – Bhupat. Tarun Kumar has also crossed the forest almost at the same time when the shriek of a woman was heard there and at that time heavy rainfall was also taking place. Tarun Kumar is known to Damodar Raana who likes him very much and well-aware of this fact that his younger sister – Mukta and Tarun are in love with each other. However the amnesia of Tarun makes him hesitating to marry Mukta to him. Damodar dislikes Vikram very much because after the mysterious death of Vikram’s first wife – Roopa in a sea-mishap, Vikram had developed attraction towards a much younger girl – Kiran whom Damodar loved and wanted to marry. This fatal attraction of Vikram towards Kiran had led to Kiran too dying mysteriously while living in Vikram’s mansion and since then Damodar became Vikram’s foe forever. After Kiran’s death, Vikram married Neelam who mostly spends her time in her studio situated outside the mansion, making idols.

The shriek which was heard in the jungle in that dusk hour when it was raining, had emerged due to the murder of a woman in the forest at that time. The murder victim was Subhadra Maanake who was the wife of a jailbird – Poosa Laal Maanake. The police officer who comes from the city to investigate her murder is Inspector Deshmukh who is able to link the events happened and are happening in Mahipaalpur to some old unsolved police cases and a hardcore criminal – Dilawar. He comes to know of the impoverished state of Vikram who was once a multi-millionaire and it gives him a hint that he has been being blackmailed by someone on the basis of some crime committed by him in the past which is known to the blackmailer. To his shock, Vikram commits suicide in front of his eyes when he approaches the mansion to interrogate him. On the other hand, after coming to know of his wife’s murder, Poosa Laal Maanake breaks the jail and runs away to seek his revenge from the probable murderer. This very very intricate mystery gets resolved when Tarun regains his memory in the climax. 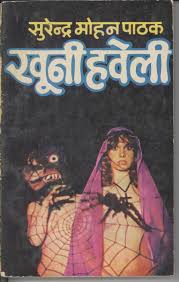 Not just the plot, but the complete milieu of the novel is filled with mystery and a little bit of horror. The forest, the rainfall, the dark, the different sounds, all these things sum up to a sensational experience for the reader and just through the words, he is able to visualize and feel the environment of the novel as though he himself is present there. When I read it (sometime during the late eighties), I found myself as spellbound throughout. When I was over with the novel, I felt as if I have come out of a hypnotic state. Without dealing with the issue of the originality of the plot, let me admire Mr. Pathak wholeheartedly for expanding the stuff of this short novel on a pretty large canvas. I have seen that in several Indian and foreign novels, superfluous incidents and scenes are inserted to fill the pages and thicken the novel. Khooni Haveli is an exception. Perhaps not a single word has been written in it without a purpose or any link with the main story. The experience of reading this novel is akin to a roller-coaster ride

The story starts with the murder of Subhadra Maanake and ends with the revelation of the name of her murderer in the ending paras. The author has not given the reader any time to think about the solution of the mystery by keeping the pace of the narrative very fast. Written in simple but Urdu-mixed impressive language and given an apparently 2nd class title, the novel is excellent in its quality. It’s different from Mr. Pathak’s series novels and all the characters have been allowed to develop naturally. No character is sketchy and even the small characters like Ujagar Singh who runs a Dhaaba (small restaurant) in the town, Bajrangi who is a petty thief, Amolakraam who is the in-charge of the local police chowki, Vikram’s servant Bhupat’s aged wife etc. also appear like real flesh and blood human-beings.

I wholeheartedly recommend this small novel to the readers of Hindi crime-fiction. Been penned decades back and not reprinted for around the past quarter of a century, it’s not easy to find a copy of it. However if you get a copy, please don’t go by the title which may appear cheap to many and take my guarantee for its superior quality. As I have already told that I became the author’s fan by reading this novel only. Read it and you won’t repent reading it, I assure you.

A Chartered Accountant with literary passion and a fondness for fine arts
View all posts by Jitendra Mathur →
This entry was posted in Book Review and tagged Book Review - Khooni Haveli (by Surendra Mohan Pathak), mystery, roller-coaster ride. Bookmark the permalink.