In my review of Phir Wohi Dil Laaya Hoon (1963), I have said that a trend had started in Bollywood cinema during the late fifties which continued through the sixties that an entertaining flick was made by weaving the script around some melodious songs and beautiful locales and adding some comic and romantic punches to it. Thus a formula-based product was prepared to satisfy the entertainment appetite of the typical Bollywood viewer without paying two hoots for the story of the movie. During the nineties, the team of David Dhawan and Govinda also followed the same path. And we have seen the similar thing in some movies directed by Anees Bazmee as well. And why not ? The typical Hindi cinema spectator has always wanted a formulaic entertainment lasting for around two and a half hours in which a dish is served to him with spices like comedy, romance, action, music and dances being mixed in different proportions. And when the served dish is like that only, why should it not become a box office grosser ? Today I am reviewing a movie which falls in the same league. Made by Sasadhar Mukherjee (Joy Mukherjee’s father) and directed by his nephew Ram Mukherjee (Rani Mukherjee’s father), this movie is Leader (1964) starring Dilip Kumar and Vyjayantimala in principal roles.

The leader of our movie is a youth with multiple talents and multiple facets of his personality – Vijay Khanna (Dilip Kumar) who on one hand, is the ringleader of some loafer boys and a fearless journalist on the other. He is a law graduate and that’s why is able to defend himself in any lawsuit filed against him in any court. He dislikes the selfish and unethical politics being played in his country and can sing patriotic songs as well as deliver inspiring speeches at his will. He can even fly a plane. And he is quite jolly as well as highly romantic also who falls in love with Sunita (Vyjayantimala) who is the princess of the erstwhile princely state of Shah Garh. Her brother is said to have been induced by Vijay Khanna as a member of his loafer-gang. However she is smitten by the charm of our allrounder hero who masquerades as an astrologer before her. With comic and romantic moments and classic songs, the story moves ahead and the twist comes when Vijay is charged for the murder of a highly respected politician (Motilaal). Sunita helps him in escaping and now both of them are on the run. The maxim of All’s well that ends well comes true in the expected climax when everything is set right for them.

I had watched this movie first on Doordarshan decades back and watched it again recently on internet. First time, I had watched it in complete form but now the version that I saw (uploaded through Shemaroo VCD) turned out to be a moth-eaten one with several scenes missing from that (including that of the murder and the hero’s reaching the spot). However the thing is that the movie contains a highly entertaining first half but loses its way in the later half. In the first half too, the entertainment is illogical. You just keep your brains under lock and key to enjoy the nonsense comedy, romance and patriotism. Logic, coherence and connectivity is seriously missing here. Who cares ? Still the movie is quite entertaining. How ?

Because of the comic timing and the romantic gimmicks of the legendary Tragedy King of Bollywood, i.e., Dilip Kumar and his amazing on-screen chemistry with ever-gorgeous Vyjayantimala. On many occasions on this forum itself, I have discussed the highly admirable comic talent of Dilip Kumar which he showcased in movies like Azaad (1955), Kohinoor (1960), Ram Aur Shyam (1967) and Gopi (1970). Leader is also an example of the same. This mindless movie is worth a watch due to certain reasons and Dilip Kumar’s mindblowing performance is one of them. He does comedy quite effortlessly and Govinda seems to have taken a leaf or two out of his acting book in this regard. You cannot stop your laugh at his performance in many scenes in the opening hour of the movie. And then, he romances also with equal proficiency. You know that whatever is being presented on the screen defies logic but you don’t complain because the hero is entertaining you like anything. He won the Filmfare Best Actor award also for his performance in this movie.

And then there is Vyjayantimala, the great Bharatnatyam dancer as well as the highly beautiful Bollywood heroine whose on-screen chemistry with Dilip Kumar was always extra-ordinary may it be in Naya Daur (1957) or in Ganga Jumna (1961) . Leader was the last movie done together by this beautiful pair and they win the heart of the audience in this movie also. Forget the logic and feel the romance which is tender, emotional and striking a chord in any romantic heart. 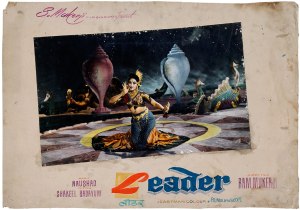 This is a colour movie and the cinematographer has left no stone unturned in capturing the beauty of different locales. In the song Ek Shehenshaah Ne Banwa Ke Haseen Taj Mahal, he has captured the beauty of Taj at Agra with a great amount of aestheticism. This movie is not only a musical and romantic treat but also a visual treat. Editing is bad but when the script itself was lackluster, what could the poor editor do ? 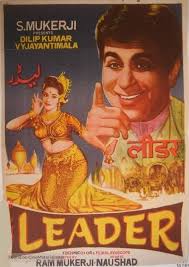 Summing up, Leader is an entertaining movie and was a box office grosser in its time. Please don’t look for any logic here and enjoy the fun ride just like the hero of this movie.