In my review dedicated to Bollywood mysteries, I had kept Hamraaz (1967) at the numero uno position in my list of memorable suspense thrillers ever made in Bollywood. Still, it is my most favourite suspense thriller which was a blockbuster in its time and re-released several times thereafter. I had seen this classic mystery in theatre in Kolkata (then Calcutta) in 1989. This excellent movie is the brain-child of the legendary director – B.R. Chopra. If you want to watch an edge-of-the-seat genuine suspense thriller with an excellent musical score, this masterpiece starring Sunil Dutt, Raaj Kumar, Vimi, Mumtaz and Balraaj Saahni is there for you which, in my opinion, is the best musical suspense thriller ever made in Bollywood.

Hamraaz (someone who knows your secret) starts with the hidden marriage of Vimi, the daughter of a military contractor at Darjeeling, who finds herself pregnant after hearing the news of the death of her husband, Raaj Kumar in the 1962 Indo-China war. After delivery, her father informs her that she had delivered a stillborn. Time passes and Sunil Dutt, a famous theatre artist, enters her life, proposes her, marries her and takes her to Bombay without knowing about the secret marriage and delivery issues buried in his wife’s past. A few years later, Vimi is informed about her child living in an orphanage of Bombay by her father when he is on his death-bed. Vimi meets her child (daughter), takes her to her home and requests Sunil Dutt for her adoption which is refused by Sunil Dutt on the plea that she won’t treat that child as her own when she herself delivers his child later on. Since then the activities of Vimi start creating suspicion in the mind of Sunil Dutt and the suspense begins. Sunil Dutt spies on his wife only to find herself as murdered and himself becoming a suspect in the eyes of the investigating officer, Balraaj Saahni. These and the following events, the thrill and the unfolding of the mystery; everything combines to a very very big treat for the suspense thriller fans. 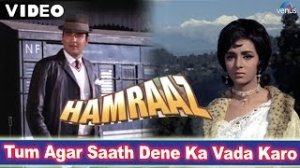 The beauty of the narrative is that all these five songs are over within the first one hour of the movie and immediately thereafter the viewer finds himself enveloped in a non-stop suspense drama lasting for more than two hours. But despite this much length of the movie, the legendary director does not allow the viewer to get bored even for a single moment. It is thoroughly entertaining from beginning to end. The speed of the narrative after the songs are over, is so fast that the viewer keeps on watching, holding his / her breath without getting any time to pause and think from the master storyteller.

The story of Hamraaz is inspired by William Shakespeare’s classic play – Othello. There is a scene also in the movie in which a sequence of Othello is played by the theatre artistes (i.e., the hero and his co-actors). The screenplay developed on the basis of this theme is simply brilliant and when the viewer is out of the theatre (or finished with the VCD / DVD or the satellite telecast), then only he / she realizes what a hypnotic state he / she has been in for the previous few hours. Through the spellbinding narrative, B.R. Chopra has been able to clarify with conviction the difference between reading a mystery and watching a mystery. It underscores the superiority of the visual medium in presenting a mystery over the medium of words. It’s a suspense thriller in which the spectator not just watches the mystery but lives the mystery shown on the screen. The white-shoes of the mysterious person whose identity is revealed just before the climax, is something unforgettable for the spectators.

All departments of the movie are up to the mark. The scenic beauty of Darjeeling has been very well captured by the cinematographer. Production value is quite high according to the repute of the prestigious B.R. Films banner.

The heroes have done exceedingly well, especially Sunil Dutt. Vimi does not show any acting talent in her debut movie but she looks extremely beautiful and that has made up for her acting deficiency. Mumtaz also looks very pretty. Herself alongwith the complete supporting cast, has performed satisfactorily. We can also see Saarika in this movie as a child artist and hers is also a heart-winning performance . 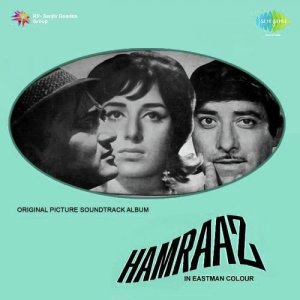 Considering the plot, the acting, the tight screenplay with excellent direction and above all, the music; the movie easily finds itself in the list of all time great suspense thrillers of Bollywood. Any mystery-fan who has not seen Hamraaz, should not miss it. However this movie is equally recommendable for the audience of romantic musicals also. It’s truly outstanding and nothing short of a textbook of filmmaking for the contemporary filmmakers.