The mist of mystery

Posted on January 2, 2018 by Jitendra Mathur

First of all, I sincerely thank my my dear friend and elder – B.S. Sethi Saheb for inspiring me to pen the review of this classic murder mystery which is an Indianized celluloid adaptation of Agatha Christie’s play – The Unexpected Guest. Directed by B.R. Chopra – Dhund (1973) is still considered one of the best murder mysteries made in Bollywood which keeps the viewer hooked right from the very first scene to the climax. 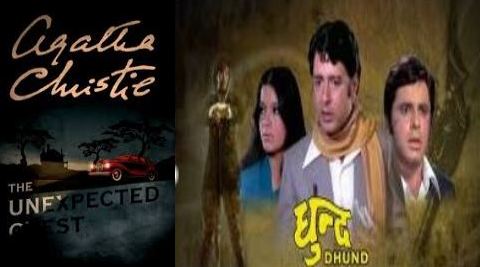 Dhund or Dhundh (mist) starts with a traveller whose car has had a breakdown in the misty weather in the night and he wants to make a telephone call from a house lying on his way. While entering the house, he finds a shot dead person lying on a chair with a lady sitting beside him having a gun in her hand. The lady who is the wife of the deceased man, tells him that she has killed her husband and asks him to call the police so that she could be arrested. Upon listening to her sad story containing the oppression and cruelty effected to her by the dead man, i.e., her husband, the traveller offers to help her by cooking a story to be served to the police to save her from the law. It turns out to be a case of love triangle because the woman, now a widow, has been in love of another man. However the more the police investigates the case, the more intricate the mystery of this murder appears to them. The truth comes out in the court-room in the climax only. 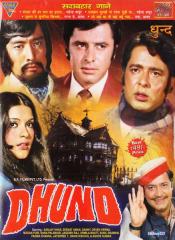 The narrative captures the minds of the spectators right from the very first frame after the credits which run alongwith the classic Ghazal of Mahendra Kapoor – Sansar Ki Har Shay Ka Itna Hi Fasaana Hai and thereafter barring some songs (which could have been avoided), the narrative moves swiftly towards the desired end, i.e., the revelation of the mystery of the murder. The story goes into flash back from time to time and the performance of Danny Denjongpa as the cruel husband makes a great impact. In a whodunit involving limited characters, a viewer can always guess for the murderer by logical elimination but for that also time is required by him to think over the scenario. The flawless direction of B.R. Chopra does not give the viewer that time only and that’s the success of this whodunit. 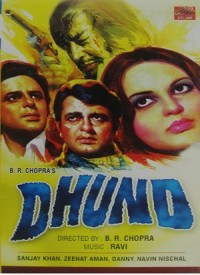 This was the movie which established Danny Denjongpa firmly in Bollywood in the real sense. He had done some movies earlier but it’s Dhundh which made him popular. His throwing saucer at the face of the camera makes a great impact in two-dimensional cinema itself. I sometimes ponder, had this movie been made in 3 D format, this scene would have proved awesome for the viewers. Other than Danny, Zeenat Aman as the leading lady, Sanjay Khan as her lover and Naveen Nischal as the traveller helping Zeenat Aman have done justice to their respective roles. The complete supporting cast has also done well.

B.R. Films’ patent music director, Ravi has composed music according to his repute only, using his favourite singer Mahendra Kapoor for the male voice. Sansar Ki Har Shay Ka Itna Hi Fasaana Hai is a classic Ghazal. Uljhan Suljhe Na, Rasta Soojhe Na (Asha) is also very very melodious, meaningful and impressive. A dance number – Jo Yahaan Tha Woh Wahaan Kyun Kar Hua upon which Padma Khanna and Jayshree Talpade perform (voices being of the Mangeshkar sisters – Asha and Usha) is also quite entertaining to watch. One more duet (by Manna Dey and Asha) – Jubna Se Chunariya Khisak Gayi Re is also in the movie. Though these songs seem to be a bit situational with the meaningful lyrics penned for them (by Saahir Ludhiyanvi), one or two songs could have been removed to trim the movie.

Technically the movie is up to the mark. Though, as I have already asserted, it would have been better to shorten the movie a bit in order to make it compact and more impressive like the original story of the mystery-queen, Agatha Christie; the editing is not that bad. Background score is good. Cinematographer has ably captured the beauty of the mountains and the hilly region shown in the movie. Production value aspect has also been given proper attention according to the standards of the prestigious banner which has made it. 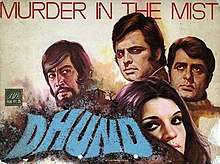 On the flip side, there are regular Bollywoodish plot holes and inconsistencies in the narrative. It’s an old fashioned mystery. But the pluses are enough to outnumber the minuses.The storyteller has not allowed the grip of the narrative on the spectators to be loosened anywhere. True to its title, the mist / fog of mystery pervades the maximum part of the movie, to be cleared and make the solution visible in the climax only.

I wholeheartedly recommend this classic mystery to the audience of whodunits.

11 Responses to The mist of mystery