The temple of justice

Posted on January 1, 2018 by Jitendra Mathur

Nothing happens in this world or in an individual’s life before the right time for that thing to happen arrives. This assertion has proved to be true for me in the context of several things in my life. And as Joseph Murphy asserts in his bestseller book – ‘The Power of Your Subconscious Mind’ – If you sincerely desire something, your desire will ultimately be materialized by the effect of the power released by your subconscious mind, some of my desires have also come true albeit after a long (and patient) wait. Watching Insaf Ka Mandir (1969) was one such desire only which kept on thriving in my heart for years and ultimately got fulfilled in 2017. I had seen a part of this movie on ETV channel around two decades back and liked that part so much that started longing for watching the whole movie. And all of my efforts to watch it were in vain because neither I could catch it again on any TV channel, nor find its VCD / DVD. For the past few years, I had been searching it on internet but except one song, nothing of the movie was uploaded on internet. And when one fine morning I found it uploaded on youtube, there’s no end to my joy. And upon watching it, I got another surprise because the uploaded version was nothing but a copy of that was shown on ETV channel only (with the ETV logo appearing clearly on the screen alongwith the notifications of break / news telecast rendered during the running of the movie. Well, my wait to watch Insaaf Ka Mandir proved to be worth it because I got a complete satisfaction of watching a good movie.

Insaaf Ka Mandir (temple of justice) is the story of Sunil (Sanjeev Kumar) who is a law-graduate and comes to know from the last letter of his fostering father (who had written the letter just before his demise) that he’s the offspring of some unknown parents and his mother is alive. That letter only gives him the reference of Mrs. Durga Devi Jain (Nadira) who can take him to his mother. Sunil who was earlier studying Law through a boarding college, moves to Mumbai (then Bombay) with his family servant Sunder (Asit Sen) to meet Mrs. Jain and then approach his long-lost mother through her. However he is taken aback to see that Mrs. Jain is all set to adopt him as her son and when he insists upon meeting his mother, Mrs. Jain makes it a condition that she will ensure his getting his mother only when he agrees to become her son and thus the legal heir of all her wealth. Being a man of self-respect, Sunil turns down her offer and decides to search his mother himself without the help of Mrs. Jain or anybody else. Destiny makes him meet Mr. Badri Prasad (Tarun Bose) who is a renowned lawyer of Bombay and whose daughter Sunita (Snehalata) was his class-fellow during his law course. Sunita was already in love with him and now he also starts loving her. However while in association with Sunita, her father and his assistant Shambhu Shankar (Manmohan Krishna), Sunil comes to know of the mysterious death of Mrs. Jain’s step-daughter – Saadhana (Aruna Irani) which was termed as suicide by the police.

Sunil observes that both Sunita and Shambhu Shanker who was earlier an employee of Saadhana’s father, i.e., Mr. Jain are of the opinion that Saadhana had not committed suicide but Mrs. Jain had murdered her. However Mr. Badri Prasad is of the opinion that his daughter Sunita and his assistant Shambhu Shankar both are nurturing a wrong notion in their hearts whereas the truth is that Saadhana had indeed committed suicide only. He advises Sunil to investigate the case himself and by ascertaining and establishing the truth, clear their misunderstanding about Saadhana’s death and Mrs. Jain’s so-called role in that. Sunil alongwith Sunita, now his sweetheart, investigates the case and on the basis of his findings, gets the shelved case of Saadhana’s death reopened. He becomes the de facto public prosecutor (a lawyer working under the supervision of the authorized public prosecutor) and charges Mrs. Jain of murdering her step-daughter. Mr. Badri Prasad, on the other hand, becomes the defense counsel of Mrs. Jain. The truth behind Saadhana’s death and many allied issues get unearthed after an intriguing and gripping courtroom drama. And finally Sunil happens to meet his mother also whose quest was also going on for him alongside the investigation of Saadhana’s death. 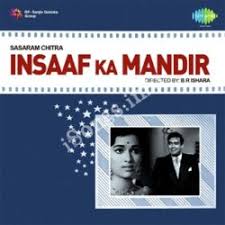 I don’t deny that like most of the Bollywood movies, the script of Insaaf Ka Mandir also consists of flaws and plot holes. But they are not too many and pluses in the movie are adequate to outnumber and thereby overshadow them. I was so much entertained and impressed by the movie that despite spotting plot holes in the script, I did not pay much attention or importance to them. The movie grips the viewer since the very beginning and that grip is not loosened till the ending reels. There’s some dragging in the climax after the revelation of the truths hitherto hidden to the hero but before that there is no slackness in the movie except the romantic songs featuring the hero and the heroine. However that romance is also so heart-conquering that the romantic viewers can excuse the director for that though it blocks the flow of the narrative. It’s a well-made movie, no doubt.

Insaaf Ka Mandir is not a whodunit or a mystery because the suspense is mainly for the hero and not for the audience because certain things are quite obvious and no red-herring is able to distract the viewer from the truth. The emphasis here is mainly on the emotional tension between certain characters. All the same, the curiosity factor remains alive throughout and there is no boredom anywhere. Director B.R. Ishara was quite skilled in directing such movies in those days and he has done his job well in this movie also. He only is the writer of the movie alongwith being its director and he has narrated the story in such a way that the truth is revealed on a layer-by-layer basis with the final revelation being damn impressive. A sizable part of the narrative in the post-interval portion is devoted to the courtroom drama which is spellbinding. The narrator has termed the courtroom as the Temple of Justice and that’s reason behind titling the movie as such. The end is tragic and able to move the viewer deep within. There was no scope for comedy in the script, nevertheless some laughs have been generated for the viewers through the talks and mannerisms of a servant in the household of Mrs. Jain. 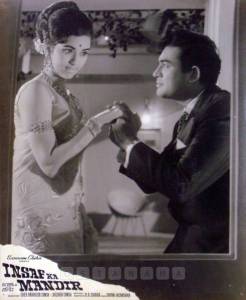 Since I am quite impressed by the romance of the lead pair which virtually won me over, I mention it specially. The character of the heroine of this movie is awesome who is motherless but has got good SAMSAKAARAs from her father who is a wealthy person and a reputed lawyer but never shows arrogance and maintains utmost humility. He has passed on the same traits to his daughter also who falls for the charms of Sunil but keeps him comfortable knowing that her love is one-sided. The way she effortlessly wins Sunil’s heart, enables her to effortlessly win over the audience as well. Their romance is not only neat but also appears quite natural on the screen. The character of the heroine’s father Badri Prasad is exemplary who gets the sincerity of the love blossoming between his daughter and Sunil examined through a private detective and after the confirmation of that, decides in favour of their union without a fuss. The way he treats people junior / younger to him or having a modest background / financial status, is an example how rich and successful people should maintain their humility and sensibility.

Sanjeev Kumar has been one of the greatest actors of not only India but also the world and he has done full justice to the down-to-earth Sunil who is in quest of his mother as well as the young lawyer investigating and then dealing in the court the case of a mysterious death. Snehalata with her girl-next-door looks has made a perfect pair with Sanjeev Kumar and their on-screen chemistry is wonderful because of which only the romantic encounters and interactions of the hero and the heroine are able to strike a chord in the heart of the audience. Prithvi Raj Kapoor as the judge has brought dignity and depth to the character. Aruna Irani, Manmohan Krishna, Tarun Bose, Asit Sen and the complete supporting cast members are perfectly in place. The best performer is undoubtedly Nadira who has infused life into the complex character of Mrs. Jain. I don’t think that any other actress of that era would have been able to do justice to this difficult role.

Sapan Jagmohan have prepared ear-soothing music for this movie with the help of the beautiful lyrics of Naqsh Layallpuri. However the best song of the movie (in my view) – Nindiya Khokar Nain Hanse has been penned by Anwar Sahasrami. Other songs – Shaayar To Nahin Hoon Lekin, Sun Pyare Sajna Re, Koi Bahaar Ban Ke, Pyare Aa Ja Chori Chori and Aap Hi Ki Kasam are also good to listen. The songs of this movie do not claim to have been chartbusters but any music lover will appreciate them. Sung by Mukesh, Mohammad Rafi, Suman Kalyanpur, Asha Bhosle and Usha Mangeshkar; all the songs are not routine, some are situational also.

Made with a modest budget, this movie is technically okay. Background score and editing are up-to-the-mark. Dialogues are praiseworthy. The movie is neither lavish, nor unduly long.

Summing up, despite certain weaknesses in the script, Insaaf Ka Mandir is overall a good and entertaining movie which is able to satisfy the audience of all the categories though at the crux of it, it’s an emotional drama.

6 Responses to The temple of justice