I am shocked like anything to know that yesteryears’ popular heroine Shyama is no more. She passed away on 14th November, 2017 and the news reached me quite late. While feeling a throbbing in my heart, I happen to remember today a Hindi article written on her some three decades back by a well-known film journalist. The title of that article was – Shyama : Jisse Chaandni Se Pyaar Hai (Shyama who loves moonlight).

As my tribute to the legendary actress, I am presenting this review.

During the fifties and the sixties, a no. of quality suspense thrillers were made in Bollywood with tight script, good songs and some doses of romance and healthy comedy; thus making the product as rendering wholesome entertainment to the audience. Kala Aadmi (1960) is one such movie only starring Ashok Kumar and Shyama in lead roles. 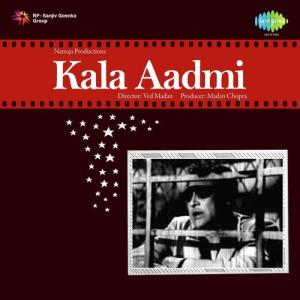 Kaala Aadmi (dark man) starts with the issue of the will of the late father of the heroine – Indira (Shyama) according to which she has to get married by a certain date to be entitled to his wealth. If she doesn’t marry by the deadline given in the will, then she won’t get that wealth which will go to charitable institutions. Indira’s father had made such a will because of the absconding act of her twin sister Nisha (Shyama again) who had fallen into bad company and finally run away with her lover who was a man with a criminal background. Subsequently, she and her lover were known to have died in an accident. However, the bad name that Nisha’s act had brought to the family honour instigated the father of the sisters to make such a will so as to ensure that Indira gets married to a suitable boy at a reasonable age. Indira’s uncle is her present guardian and he also wants her to get married by the given date so that the issue of her inheritance is sorted out for good.

But Indira who, unlike her dead twin sister, is a decent girl full of tender feelings; is not willing to marry anybody for the sake of her father’s wealth. She wants a loving and caring man in her life who marries her not for the sake of her inheritance but for the sake of herself only. The tragedy is that the fact of this will of her father is well-known and that’s why greedy youths are pursuing her in order to marry her and become a shareholder in her wealth thus inherited. One such youth is Mohan (Mehmood) who is always wooing her and constantly reminding her that if she fails to marry by the D Day mentioned in the will, she will lose her father’s wealth.

However Indira likes a painter Madan (Ashok Kumar) who is a thorough gentleman and despite liking her very much, is hesitant to marry her because of her father’s will only. He doesn’t want to be seen as a greedy person in the eyes of Indira as well as the world. On the other hand, Indira is ready to forgo the wealth of her father for the sake of becoming his life-partner. She keeps on pursuing him to marry her as she would prove to be a very good wife for him but Madan always finds himself in two minds regarding this matter. Now comes the main twist in the tale.

A lethal attack is made on Madan’s life by hitting him by a car. His life is saved thereafter but he becomes blind. In his state of blindness, he starts getting a feeling that Indira is no longer the loving, caring, selfless Indira known to him prior to the accident. Now she appears to be a greedy girl pressurizing him to marry her anyway before the D Day is passed and she is deprived of the inheritance as per the provisions of the will. However now blind Madan is more interested in knowing as to who tried to kill him and why. He takes steps in this direction with the help of his friend (Johnny Walker). After many interesting events, the suspense gets revealed in the climax. 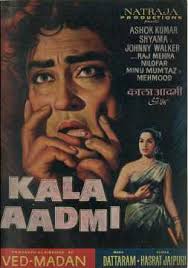 I had watched Kaala Aadmi on Doordarshan more than three decades back. Not only the suspense of the movie kept me hooked till the climax but also a song – Dil Dhoondhata Hai Sahaare Sahaare got its imprint on my heart forever. In this era of VCD and DVD, I bought the VCD of this movie from the market some time back and watched it again. The movie gave me the same pleasure and entertainment as it had given through my first watch of it albeit I knew the solution of the mystery this time.

Kaala Aadmi starts very interestingly and the story does not digress anywhere despite the intermittent romance, comedy and sentimental dialog. The main track keeps on going from beginning to end and that’s an admirable thing. The director has done his job well and he has got able support from the artists.

Since the suspense-filled story takes off soon and the main track keeps on going without digression, the movie has turned out to be a compact one. I won’t term it as a great suspense movie but the curiosity of the viewer is kept alive till the climax.

The presently available print of this black and white movie is not of a very good quality. However the experience of watching this movie proves to be good despite the modest quality of the print. Cinematography, art direction, background score, action and thrill, editing; everything is satisfactory.

Shyama is in a double role and being at the nucleus of the story, she has done complete justice to the assignment. Saying something about Ashok Kumar is just like showing lamps to the sun. Mehmood became famous for his comedy in later years. However in this movie, he is in a supporting role with gray shades and has done well. Johnny Walker has done hilarious comedy as was always expected of him. Yesteryears’ B-grade heroine Neelofar is also there in a meaty role and she fits the bill. 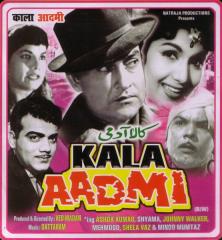 Rest in peace Shyama. You will always live in the hearts of your fans.

6 Responses to The dark man