Seventies were the decade of crime-thrillers in Bollywood when a plethora of such movies were presented to the audience. Among them Don (1978) is a milestone movie which demonstrated what a quality crime-thriller is all about. It enhanced the popularity of already very popular Angry Young Man of India – Amitabh Bachchan.

Quite interestingly, the dictionary meaning of the word DON is a university teacher, especially a senior member of a college at Oxford or Cambridge. It’s a Spanish word which denotes respect. However quite surprisingly, now it’s used for the underworld people. In this sense this word ‘Don’ appears to trace its origin to Don Vito Corleone of the classic work of Mario Puzo – The Godfather. However it’s the Hindi movie Don which coined this term for the first time in the world of Indian fiction for a gangster.

The hero of this movie is an international criminal Don (Amitabh Bachchan) who leads a smugglers’ gang but himself works for another gangster Vardhaan. It’s Don who remains in limelight and being chased by the police whereas very little is known about Vardhaan. Don is a very smart, cunning, dangerous and ruthless criminal who is very difficult to be got better of.

However one day, this high profile and domineering gangster gets killed in a police encounter. However except the encountering police officer Mr. D’ Silva (Iftekhar), nobody knows that Don has died. Mr. D’ Silva decides to take advantage of this situation as he knows a look-alike of Don whose name is Vijay (Amitabh Bachchan in another role). He ensures Vijay’s entry to the gang of smugglers as their boss, i.e., Don so that the complete network of the smuggling activity can be caught by the law. In the gang, Vijay presents himself as Don to the members of the gang and stealthily keeps on searching significant information about the activities and links of the gang.

Vijay has to be wary of a girl Roma (Zeenat Aman) who is an expert in judo and karate and Jasjeet (Pran) who is a handicapped person as both are hell bent upon settling their respective scores with Don. He comes to know of the existence of some Vardhaan whom Don and his gang works for but nothing is known about him. He wants to provide all the relevant information to Mr. D’ Silva so that a huge police action could be carried out against the gang. However the sudden demise of Mr. D’ Silva puts Vijay in deep trouble as now he is not able to prove before the law and the society that he’s not Don because Mr. D’ Silva was the only person knowing his real identity. The action-packed climax paves the way for Vijay’s redemption once Vardhaan is unmasked.

This highly entertaining and very well made movie inspired many movies to be made later viz. Daav-Pech (1989) starring Jeetendra in lead role and Madam X (1994) starring Rekha in lead role. Farhaan Akhtar straightaway made its remake in 2006 starring Shah Rukh Khan in lead role. Many other movies which did not lift the whole story of Don, also used certain ingredients of it. Meri Aawaaz Suno (1981) is one such movie in which Jeetendra has played the lead role. But very few people know that the writers of Don – Salim-Javed themselves had written it by seeking inspiration from Shakti Saamanta’s China Town (1962) in which Shammi Kapoor has played the lead role.

Don is a fast-paced thriller with ample doses of comedy through the character of Vijay who impersonates Don. Right from the opening scene which establishes the title character as a bold, cunning, sharp-minded and authoritarian individual before the audience to the climax, the whole movie proves to be completely engrossing for any viewer. There is no moment of boredom in the movie and both the script and the direction (by Chandra Barot) have done complete justice to the original story idea. Salim-Javed used to write dialog also and they have written impressive dialogues in sync with their script. 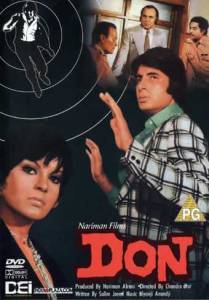 Technically, this movie is up to the mark with all the action and thrills being very good according to the norms of that period, good cinematography and art direction, effective background score and razor-sharp editing.

All the principal actors have done justice to their roles and left their mark may it be very smart Zeenat Aman (today is her birthday) or the seasoned actor Pran or the villains or the actors like Iftekhar and Helen whose roles have their own significance in the story. Who can forget Helen’s performance on Ye Mera Dil Pyar Ka Deewaana ? 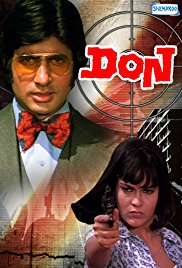 And finally, Don is a memorable movie mainly because of Amitabh Bachchan. Nobody could do this role better than AB. His tall personality with the God-given extra-ordinary voice make him the ideal choice for the domineering role of Don. He looks like a real don who is chased by the police of many countries. The remakes of Don could not be as impressive as the original version because no other actor doing this role possessed such an extra-ordinary personality. Big B has delivered an unforgettable performance in the roles of sturdy Don and jolly Vijay.

This movie is so impressive and carries such a high entertainment value that its being a blockbuster is not at all surprising. It has been re-released many times and it is capable of rocking the box office if released in theatres once more.