I have always kept Prakash Jha in high esteem since I watched Hip Hip Hurray (1984) and Damul (1985) on Doordarshan and Gangaajal (2003) and Apaharan (2005) in theatre. I always appreciated his guts of calling a spade a spade and dealing with his chosen theme without fear or favour. Further, nowhere I found him going astray from his track until I watched Rajneeti (2010) in which he turned the hard-hitting political drama into a Mahabharat-wrapped revenge saga in the post-interval session of the movie. Aarakshan (2011) proved to be another consecutive disappointment from him for his sincere admirers like me. 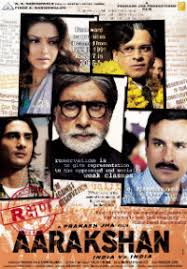 In Aarakshan (reservation), he has gone a few steps ahead in the wrong direction. Before release, it was thought in the cine-circles that he has dealt with this sensitive issue with sensitivity and maturity. Quite naturally, the pro-reservationists having a vested interest in the Indian voting politics, had started making a hue and cry under the impression that perhaps it had said anything against the reservation policy of the state. And it’d been banned in some states too which, now I know, was ridiculous because the movie speaks in favour of reservations for backward classes. Instead of presenting a balanced view, Prakash Jha has taken a stand this time, the stand in favour of the caste-based reservations. He had (unsuccessfully) fought the Lok Sabha election a few years back and he might be willing to make any such attempt in future as well. And therefore, he knows very well that no anti-reservationist can win any election in India in the given scenario. So the politician in the disguise of the filmmaker also has not taken any chances in this regard.

I always admired Prakash Jha’s guts to point out a finger at the system. But now I can see the hollowness of his guts. Now I realize that the times have come when you can criticize the shameless cops and the thick-skinned politicians because they have now got habituated to their criticism (and condemnation). However, you can’t dare to speak a single word against the reservations in the state-owned (or state-aided) educational institutions and govt. offices (and PSUs). Since the reservations have become an ever-milkable cow in the hands of the politicians, themselves as well as the beneficiaries of the system have become intolerant enough to behead the people who speak a single word against them or even demand a healthy debate on them. Prakash Jha understood that the reservation issue is a tough nut to crack, hence he chose a soft target to attack – the private coaching institutes.

To justify the title, the filmmaker has considered a few statements and arguments for and against the reservation system enough. Otherwise, he has focussed upon the commercialization of education. Well, that’s also a good subject and a burning issue for the middle-class parents who dream big for their children. But then, what’s the need to make the movie under the title Aarakshan and what’s the need to create some traditional villains in the movie and showing them as anti-reservationists (and even castists) ? By showing the baddies as cursing the reservation system and humiliating the lower caste people, the moviemaker has made his own stand pretty clear. The main protagonist opines in favour of caste-based reservations and terms the social rift created by them as the price is to be paid to correct the social injustice. Well, is it the correct price to be paid and is it the correct way to ensure social justice, he does not delve deep into it. And can one injustice be corrected through another injustice ?

I remember, while I was undergoing my schooling (the late seventies), there were fierce anti-reservation campaigns in the country though the reservation was for SC and ST (total 22.5%) only those days. Those poor campaigners did not know that in the times to come, the reservations would not only remain but also be strengthened and worse, enhanced more and more. Prakash Jha (and his hero – Amitabh Bachchan) is unable to comprehend that the reservations are being expanded only because they have become a means to catch votes. The social harmony and the national unity have got shattered to pieces due to them but do the pro-reservationists really care ? Politicians are not interested in increasing resources and means, they are only interested in restricting access to them through reservations and strengthening their vote banks consisting of the beneficiary communities.

Commercialization of education is definitely detrimental for the society and Prakash Jha has rightly said at a place that even among the reserved classes, the real beneficiaries will be those only who have money to buy education. However he has presented a too simplistic picture of it and offered a too simplistic remedy for it. This is a traditional hero versus villain clash and the larger-than-life angry young (now old) man comes triumphant in an utterly filmy manner. Not really expected of Prakash Jha.

This time Prakash Jha has not dared to clarify the location of his movie too (his earlier movies were set in Bihar). The realistic approach is also compromised because the Tabela School of the protagonist is shown as being run just in front of the posh coaching centre (just like Govinda starrer Dulhe Raja (1998) where the Dhaaba is run just in front of the five star hotel). The complete second half and especially the climax is utterly filmy and does not strike any chord in the viewer’s heart.

The main characters (except the baddies) seem to be real but their activities do not seem to be realistic. Perhaps Prakash Jha forgot to tell Deepika Padukone for some pre-interval scenes and song-sequences that it’s not Love Aaj Kal. In fact, the songs (and dance and romance too) are not required in this movie at all. Other than Saans Albeli (sung by classical singer – Pandit Chhannulal Mishra), the music is just passable. However, let me admit that the cast has invested hard and sincere work in performance and despite some characters being caricature-like (especially the character of Manoj Bajpayee), the cast has done pretty well. The movie contains many stock-characters of Prakash Jha movies in supporting roles and they have done justice to their roles (alongwith the main cast, of course).

Further, Prakash Jha’s approach does not appear to be completely original too. The characters of Amitabh Bachchan and Manoj Bajpayee contain clear shadows of the characters of Amitabh Bachchan and Mohnish Behl in Ram Gopal Varma’s flop (and superficial) movie – Rann (2010). Besides, I remember a TV serial – Chunauti aired on Doordarshan more than two decades back in which there was a similarly idealistic college-principal, Rajiv Varma and an unscrupulous trustee, Bharat Kapoor who was always conspiring against him. Perhaps Prakash Jha has made this movie in a bit hurry without devoting sufficient time on screenplay and characterization.

I still recommend this movie because it’s impressive in patches and it’s an entertaining movie which keeps you glued to the screen like a regular masala flick. Let me tell one thing to Prakash Jha loud and clear – the performance of a race-horse is to be compared with that of a race-horse only. It cannot be given any concession for the fact that it is running faster than the Tonga-pulling horse or the horse used in Baaraats (marriage-processions). Prakash Jha’s work is to be evaluated against the high-standards set by him for himself only and those standards cannot be relaxed for any film of him. If he delivers a movie which does not live up to his set standards, he should be ready for brickbats.