The day of Ganesh Visarjan is approaching which day the devotees immerse the idols of Lord Ganesha, the god of wisdom ‘n’ removal of hurdles in any work, which had been installed on the day of Ganesh Chaturthi (the fourth day of the bright fortnight of the Bhaadrapad month as per the Indian calendar) are immersed in water. Lord Ganesha has been one of the most popular gods of the Hindu community and he is the first one to be invited on any auspicious occasion may it be the marriage ceremony or the house-warming ceremony. I am also a devotee of Him and have fasting on every Wednesday since long. I very fondly listen to the devotional songs related to Him. The song which I like most among them is – Deva O Deva, Ganapati Deva, Tumse Badhkar Kaun, Aur Tumhaare Bhakt Janon Mein Humse Badhkar Kaun (O Lord Ganpati, who is better than you and who is better than us among your devotees?). This song is from the movie – Hum Se Badhkar Kaun (1981) which I am reviewing today. 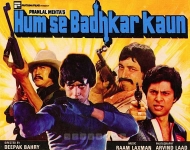 Hum Se Badhkar Kaun (who is better than us) is based on the old and hackneyed ‘Lost & Found‘ formula of the Indian movies. Normally, two brothers (or sisters or one brother and one sister) are shown as being separated in their childhood who reunite when grown-up. There are certain movies in which three brothers are shown as being separated as such viz. Yaadon Ki Baaraat (1973), Amar Akbar Anthony (1977), Aahuti (1978) etc. Hum Se Badhkar Kaun is unique in this regard that it shows four brothers getting separated in their childhood and they grow up in different environments, avail different personalities and enter different professions. This regular potboiler is an entertaining movie.

These four brothers are Chandan, Bablu, Raaju and Pappu whose father is killed by the villain of the story – Laalchand (Ranjeet) and the children get separated from their mother Radha (Purnima) as well as one another. They grow up under different environments and quite naturally, become different kinds of adults. The eldest one, i.e., Chandan grows up as Bholaram (Amjad Khan) and becomes a milkman. The second one, i.e., Bablu becomes an honest and dutiful cop – Vijay (Vijayendra), the third one, i.e., Raju becomes a thug – Johnny (Danny Dengjongpa) and the youngest one, i.e., Pappu becomes a mask-wearing robber – Tony (Mithun Chakraborty). Well, for these foursome, four love-interests are also required. Hence we have the heroines in the form of Kammo (Padmini Kapila), Rekha (Kaajal Kiran), Jeena (Neeta Mehta) and Teena (Ranjeeta). These brothers cross path with one another as well as the baddie according to the screenplay written for them.

The fact that forms the basis of different activities on the part of the various characters of this story and also lays down the foundation of the action-packed climax is a treasure whose the deceased father of the boys was a custodian of and he had given one key of the lock of that treasure to each one of his sons (total four keys were there). The keys are not identical. They are different and the treasure can be unlocked by applying all the keys only one after the other. Quite naturally, the villain is after the treasure. Finally, the brothers including the law-breaking ones, the law-abiding one and the law-enforcing one, join hands to seek their revenge from the villain, ensure that the treasure goes into the correct hands, reunite with each other as well as their lost mother and (but natural) get their sweethearts to end this movie.

Director Deepak Baahri has directed the movie in the style of the regular Bollywood potboilers and there is nothing extra-ordinary about it. All the same, the movie is entertaining and can be given a watch for that reason. The beginning, the take off, the development and the climax of the narrative; all are routine and well-identified for those who have seen a lot of such masaala movies during the sixties, the seventies and the eighties. Despite this, the movie proves engrossing once the spectator is in and starts enjoying the movie without taxing his mind. Considering the fact that it contains four heroes and four heroines, there is an ample quota of romance. The romantic track of Bholaram, the milkman and Kammo (Padmini Kapila), his English teacher is the most amusing and entertaining one.

Technically the movie is in line with several such run-of-the-mill movies made during that period. Nothing great but nothing poor also.

Raamlaxman could not prepare memorable music with the lyrics of Ravindra Rawal. Except Deva O Deva Ganpati Deva, the songs are average fare.

The heroines meet the objective of being eye-candy for the audience because there is nothing much for them in this male-oriented script based on the theme of crime and revenge. This movie belongs to the heroes and all of them have done their respective jobs very well. I especially mention Amjad Khan who has infused life into the role of a milkman. While watching this movie, it’s pretty difficult to think that this actor only immortalized Gabbar Singh of Sholay on the screen. Ranjeet as the villain and the other supporting cast members are routine.

While shouting ‘Ganpati Bappa Moriya‘, I recommend Hum Se Badhkar Kaun as a nice timepass to the entertainment-seekers.