Today is the birthday of Manisha Koirala. This review is dedicated to this talented Nepali beauty alongwith Sushmita Bandyopadhyay whose 4th death anniversary will fall on 4th September this year. I was shocked like anything when I had got the news of the brutal murder of this courageous Indian authoress who wrote her true life story in the shape of a Bengali novel – Kabuliwalar Bengali Bou (Kabuliwala’s Bengali Wife). She was shot dead by the Taalibaani militants outside her residence in the Paktika province of Afghanistan on 4th September, 2013. Sushmita had fallen in love with an Afghan businessman – Jaanbaaz Khan and shifted from Kolkata to Kabul in 1989 after marrying him. After the emergence of an Islamic fundamentalist militant organization titled as Taalibaan (students) in 1993 and its capturing administrative powers there reducing the formal political regime to almost naught, life became hell for Sushmita there with certain very painful truths about her husband also coming out to fore which were hitherto unknown to her. She managed her escape from there through a lot of toil, hardship and struggle and penned down that phase of her life in the abovementioned book. This book got used as the basis of a Bollywood movie which is Escape from Taliban (2003).

Directed by Ujjwal Chatterjee, Escape from Taliban features Manisha Koirala in the lead role and Ali Khan in the role of her husband. The lady protagonist, i.e., Sushmita marries her Afghani lover despite opposition from her Bengali Hindu family but when moved to Afghanistan with him, she is horrified to see humanity being butchered in every particle of the land where it’s a crime to be a non-Muslim and it’s even greater crime to be a woman. She is rechristened as Sayeeda Kamaal after conversion and gives birth to a baby child while living with her in-laws. Her humanitarian heart weeps for the oppression of the innocents in that barbaric land. Some hidden truths about her husband also get revealed to her. Now she wants to be back to her motherland, i.e., India with her daughter but it’s a Herculean task. How she is able to make this great escape happen forms the remaining part of the story.

Over the past two and a half decades of their reign, Taalibaan seems to be willing to take the world to the medieval era and convert it into Daar-ul-Islaam (the land of Islaam) where everybody is Muslim and leads his / her life according to the Sharia rule (as interpreted by them). They do not believe in giving the basic human rights and the bare minimum respect to the non-Muslims as well as the females (of all categories and communities) as well as those who do not support their ideology. They are cruel. They are insensitive. We have the latest example of a little girl Malala Yousufzai who was shot by them because she was promoting education among the Muslim girls. And quite unfortunately, their biased and condemnable ideology is directly / indirectly supported by several Muslim leaders and organizations all over the world including the so-called secular India. Sushmita vividly portrayed the pitiable condition of non-Muslims and females (of Muslims and non-Muslims alike) in her book and Ujjwal Chatterjee who has written the screenplay of this movie also has followed the same, making the celluloid version of the book with sincerity and honesty.

All the same, the movie is not an excellent one. It depicts reality and does not digress from its motive, nevertheless it’s to be acknowledged that it could have been a much better one as the heart-tearing reality has not been portrayed with the amount of passion required for the purpose. The movie thrills more, moves less. With a better star cast and a better director, it could have been a masterpiece. At several places, the film appears to be just something above average which is sad considering the strength of the plot which is the much acclaimed book. The movie is technically okay though.

Vanraj Bhatia’s music and Mehboob Kotwaal’s lyrics have not created any chartbusters but all the songs are meaningful, admirable and perfectly in sync with the mood of the movie.

Today’s birthday babe – Manisha Koirala has done well in the lead role. Ali Khan as her husband and the other members of the cast in various supporting roles have done justice to their respective roles.

While recommending this movie to all those who take interest in watching realistic, meaningful and purposeful movies, I wonder why Sushmita went back to that country after making such a daredevil escape from there. Perhaps because she was a sensitive lady and a true humanist and she went back only to help others like her. Ever since her return to the cursed land, Sushmita was busy ceaselessly in social work, especially pertaining to women’s healthcare and upliftment and that’s what’s not acceptable to the beasts who want to keep the half of the mankind as enslaved to the other half for the ions to come. 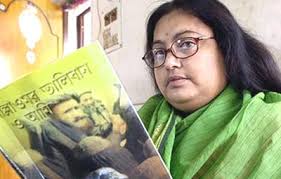 Sushmita could manage an escape from Taliban during the nineties but then she succumbed to their cruelty with little hope left that this great sacrifice of hers will ever bring about any positive change in Afghanistan or the fundamentalist Muslim brotherhood at any place. While conveying hearty birthday wishes to Manisha Koirala and paying my tribute to the brave Indian authoress – Sushmita, I take this opportunity to make an appeal to all the humanists of the world to rise up against this barbarianism and imposition of the outdated thinking and inhuman practices on the world. The so-called secular Indians may still not break their silence (they are ready to adjust to anything undesirable done in the name of Islam for the sake of their secularism which is nothing but maintaining of double standards for Muslims and non-Muslims). However all the humanists should join hands to save humanity and innocence from Taliban and similar outfits.

4 Responses to Sushmita Banerjee killed ! No escape from Taliban !