Emraan Haashmi is one of the popular heroes (though not in the league of the Khans or the Deols) of Bollywood today. Footpath (2003) is his debut movie which was made by his uncles Mahesh Bhatt and Mukesh Bhatt as his launchpad only and it was released on the Independence Day of India that had come fourteen years back, i.e., on 15.08.2003. I had watched it in the Om Cine Plex at Kota on 17.08.2003 which was Sunday. I had gone to watch it mainly because of its songs because I had listened to its music album containing some beautiful compositions of Nadeem-Shravan and I had liked them very much. That liking only led me to watch the movie also. 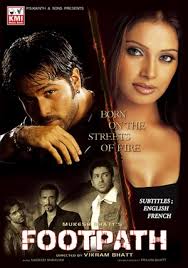 Footpath is nothing but one of the many Bollywood versions of Hollywood movie – Angels with Dirty Faces (1938). Mahesh Bhatt himself had directed one of such versions which was Angaaray (1998) taking Akshay Kumar in lead role and Naagarjuna in second lead. He wrote the script of Footpath with the same basic grains alongwith some borrowing from another Hollywood movie State of Grace (1990) but handed over the duty to direct the movie to Vikram Bhatt. Aftab Shivdaasaani has been cast in the lead role (done by Akshay Kumar in Angaaray) and debutante Emraan Haashmi has been taken in the second lead. Another associated but meaty role has gone to Rahul Dev. Well, when there are males, females are also needed as their love interest. So Bipasha Basu, Aparna Tilak and Anupama Verma are there as the leading ladies.

Foothpath is the story of three friends who get separated in childhood due to an incident that concluded with the murder of a person. Out of these three friends, two are real brothers having a sister also who likes the friend of her brothers very much. This bloody incident has taken place in Mumbai in which the friend of the brothers and the sister has already lost his father. Being an orphan now, he runs away from the city itself and grows up as Arjun (Aftab Shivdaasaani). Twenty years have passed since then and Arjun is living the straight life of a law-abiding citizen in Delhi when a cop (Anup Soni) meets him and pressurizes him to do the job of an undercover agent of the police against his childhood buddies who are outlaws and still operate in Mumbai as drug-dealers.

Arjun is not willing to do it but under compulsion, he moves to Mumbai and meet his childhood buddies Shekhar (Rahul Dev) and Raghu (Emraan Haashmi) who work for a big narcotics smuggler Sheikh (Irrfan). He happens to meet their sister Sanjana (Bipasha Basu) also who lives separately from her brothers because not liking their illegal activities. The childhood love of Arjun and Sanjana blossoms on one hand and Arjun tries to draw his friends out of the quagmire of crime. In case of Raghu who is more sensitive and emotion-led, he succeeds because of Raghu’s love for an English teacher (Aparna Tilak) who loses her brother because of his being a drug-addict. However Shekhar is not that sensitive and Arjun fails in bringing him out of the world of crime. The story ends with the union of Arjun and Sanjana after the elimination of the drug smuggling racket running in Mumbai as well as the deaths of Shekhar and Raghu.

This story of an undercover agent working against his own friends has been hackneyed like anything in Bollywood. Only a good and engaging script written for this another version of Angels With Dirty Faces would have succeeded in appealing to the audience. Unfortunately, neither the script, nor the direction is up to the mark in case of Footpath. The movie has its moments but overall, it fails to impress the viewer. All the characters of the movie appear to be artificial. All the incidents shown in the movie appear to be completely filmy. None of the three romantic angles has been developed properly. Hence this movie can be sit through and enjoyed only when the viewer watches it with a low expectation.

The biggest flaw that I found in the script and the direction of this movie that Arjun takes an easier path. He keeps on pursuing Raghu, the sensitive one to leave the wrong path and doesn’t make even the smallest effort for pursuing money-minded and insensitive Shekhar to mend his ways.

Music is one of the plus points of the movie. As said earlier, I was instigated to see this movie only by certain songs of the movie. One good song – Chain Aapko Mila Mujhe Deewangi Miliis only in the album and not in the movie (interestingly, it was used in another movie Hungama released in 2003 itself). Saari Raat Teri Yaad Mujhe Aati Rahi, Kitna Pyara Pyara Hai Sama, Zara Mera Deewaanapan, Ab Samajh Aaya Ki Duniya Kya Hai etc. are quite good to the ears. Their picturization is also okay.

Technically, the movie is so-so. Its length is definitely on the higher side. Girish Dhamija has written routine dialogs for it.

Emraan Haashmi has drawn his heart out for this debut movie of himself. He has delivered a very touching and impressive performance, giving signals that he’s the horse of a long race. All others including my favourite heroine Bipasha Basu and highly talented Irrfan are, unfortunately, just routine. TV actress Aparna Tilak has played Emraan’s love interest. This is the only appearance of hers on the big screen (never acted in any other movie). Though she has got a meaty role, she hasn’t been able to impress. Anupama Verma has played Shekhar’s love interest in this movie and her role appears to be that of a glorified extra. Aftab Shivdaasaani is miscast in the lead role.

Though this movie was made as the launchpad of Emraan Haashmi, no importance was given to him in its publicity and complete focus of the promotion was kept on Aftab and Bipasha only. This also went against the movie. It badly flopped on the box office.

I had watched it on 17.08.2003, i.e., exactly fourteen years back from today and I remember that day because when coming back from Kota to Rawatbhata on my beloved scooter, I was caught in the heavy rainfall in the evening hours and I had to cover the final 3-4 kilometers (out of the total distance of 50 kilometres) on foot also (dragging my scooter by my hands) amidst darkness, heavy rain and muddy roads.

I recommend Footpath as a one time watch to those who like the music of Nadeem-Shravan as well as to diehard Emraan Haashmi fans.