Posted on December 8, 2020 by Jitendra Mathur

Today is the birthday of both Dharmendra and Sharmila Tagore. And I dedicate this review to both these great artistes of Indian silver screen.

Women have several virtues which men can only envy for. However jealousy and hatred towards a woman who is supposed to be own rival for a man’s love is a vice whose dominance is found more in womenfolk only. When a woman finds that her man is a prisoner of the arms of some other woman, her womanly jealousy and possessiveness can play havoc. Such a woman can be the man’s wife or the sweetheart but the status hardly affects the destructive feeling hidden within. Thus her hatred for the second woman becomes the other side of her love for the man. Sunny (1984) tells such a story only in which one woman’s wrath is directed towards another woman who has snatched her man from her. 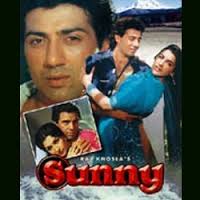 The story covers two generations and it starts with the first, senior, generation containing Inder (Dharmendra), his wife – Gaayatri (Waheeda Rehman) and his sweetheart – Sitaara (Sharmila Tagore). Gaayatri has not been able to conceive in her conjugal life and perhaps this fact created a distance between herself and husband, i.e., Inder. Inder develops an affair with Sitaara (Sharmila Tagore) and she gets pregnant through him. Suddenly Inder dies in the crash of his private plane. And post his death only, his wife – Gaayatri comes to know of his affair with Sitaara. She also comes to know that Sitaara is carrying the child fathered by Inder in her womb.

The real story takes off from here. Burning in womanly jealousy on one hand and being concerned with the business empire and wealth of Inder with no one to inherit it on the other, Gaayatri conspires against Sitaara. She deceives her by arranging her confinement in her supervision and charge at some faraway place and then tells her that she has given birth to a dead child, carrying that child to her home and declaring it as her own. That child grows up as Sunny (Sunny Deol). Sunny has inherited not only his father’s wealth but also his father’s habits, hobbies (flying plane and listening to music) and nature. He starts the story pertaining to the second generation by falling in love with Amrita (Amrita Singh) who is a singer. Since she has been fostered by Sitaara, Sunny comes into contact with Sitaara and since the very first meeting of theirs, a motherly affection emerges between the two with the reality being unknown to both that they are actually the mother and the son.

However when the proceedings for matrimonial alliance of Sunny and Amrita start, the two ladies who had a common man in their life, come into the contact again after a long time span. Sitaara comes to know that Sunny is her son only and she begs before Gaayatri to return her son to her but Gaayatri who is still not able to forgive Sitaara for snatching away her husband, becomes even more stern and stony (without realizing the gravity of her own sin of separating a mother from her child) and creates blocks between Sitaara and Sunny. Sunny feels that her mother is not happy with his decision to marry Amrita but the truth is not limited to this fact only and there’s something more that is hidden from his knowledge. And he compels his mother, i.e., Gaayatri to reveal the truth. He gets his biological mother in the end but loses his fostering mother simultaneously. 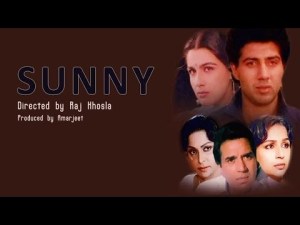 Sunny has a wafer thin storyline and in the hands of an inexperienced director, the movie would have become a mess. However, fortunately, it has been directed by Raj Khosla who has poured all his experience and expertise of filmmaking into this movie and ensured that it turns out to be an impressive emotional drama. In the post interval-session, the movie gradually gets heavy with sentiments and its pace becomes very slow. Still Raj Khosla manages to pull it off and keeps the audience glued to the screen. He is helped by the musical score in the first half and the performances in the second half. Overall, the movie is an impressive one though it compels the audience to look at the watches while heading towards its finale.

As said earlier, the brilliant performances of the artists have helped the director in pulling the flat and not-so-strong script off as a decent movie. Seasoned actresses Waheeda Rehman and Sharmila Tagore have infused life into the sentimental story with their great performances. Waheeda especially is outstanding in her seemingly negative role. This is only the second movie of both Sunny Deol and Amrita Singh after Betaab (1983) but both have given their best shot throughout the movie. Sunny especially impresses with the different shades of his performance and proves that he’s the horse of a long race. Dharmendra is master-class in his cameo. The supporting cast is okay. 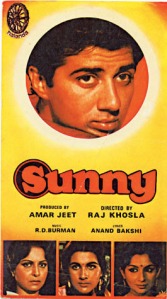 Technically the movie is up to the mark. The cinematography, the art direction, the action; everything is in order. The movie has been edited well. Considering the sentimental drama being the essence of the movie, the editor could not do any better.

Raj Khosla could have arranged a regular Bollywood style climax for this movie and gone for a convenient happy ending but he has not done so and ensured that the story ends on a tragic but more convincing and more impressive note. The movie does not prove to be very entertaining but it ends by leaving a throbbing in the heart of a sentimental viewer.

Sunny was a commercial failure. However I recommend this relationship-based romantic as well as emotional drama to those who like neat and clean sentimental movies. Sunny Deol now commands a huge fan-following. I also recommend this movie to his admirers who might not have seen him much in such intense roles. It’s a showcase of his versatile talent, no doubt.