When suspicion eats up the marital bliss

Suspicion is the worst thing to happen in a happily married life whose backbone is mutual trust only. However prior to the movie under review, this issue had not been honestly and properly dealt with in Bollywood movies. Aap Ki Kasam (1974) was the first movie which (perhaps by default) dealt with this issue boldly and refuted male chauvinism with conviction. It was the first Bollywood movie which was free from male bias and declared the worth of a woman’s self-respect and dignity in contemporary context. 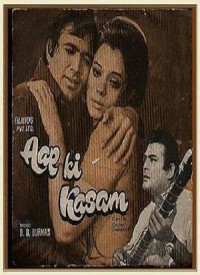 Director J. Omprakash (who happens to be the father-in-law of Rakesh Roshan and the maternal grandfather of Hritik Roshan) always made movies whose names started from the letter – ‘A’ and which were of the social drama genre. Since he always aimed to make entertaining musicals (or rom-coms in today’s lingo), this movie seems to have become a path-breaking one just by default. However end result is the most important thing and that is a thought-provoking, sensitive and interesting movie.

Kamal (Rajesh Khanna) is a financially weak student who falls in love with his college-mate, Sunita (Mumtaz) who comes from a well-off family. They get married, Kamal gets a decent job and they start their happy wedded live in a new house with Kamal’s friend, Mohan (Sanjeev Kumar) being the neighbour. Mohan’s marital life is in doldrums because of his wife’s promiscuous nature and activities. The decent nature of Mohan and the common factor of music brings Sunita and Mohan closer and they become good friends. However Sunita’s friendly gesture towards Mohan is sisterly only and Mohan too has nothing clandestine in this regard. However this pious human relationship becomes the basis of suspicion in Kamal’s heart. This suspicion leads to pregnant Sunita’s leaving Kamal and going back to her father’s home. Misunderstandings prop up, cracks and distances in their relationship get widened and finally, a depressed Sunita gets divorced from Kamal and gets married to the doctor who has been treating her. When Kamal comes to know the truth and his mistake, he repents a lot but now the wheel of time cannot be rolled back. Years later, Kamal meets his tragic death while saving his own daughter from a fire broken out in her wedding ceremony. 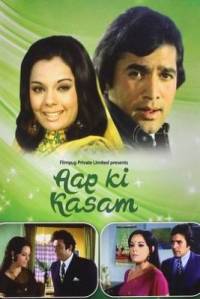 The story plot of Aap Ki Kasam (swearing by you) is just very good and the director has done full justice to it after the initial dragging. The second half of the movie is engrossing and does not allow the viewer to skip it even for a minute. However the first half is marred by the overdose of romance and comedy. I feel, the director was carried away by the norms prevailing in those times of making at least two and a half hour long movie. Else he would have trimmed it by at least 20 minutes. There are many songs (though they are quite good), romantic scenes and comedy too before the real story takes off. However once the take off is done, the flight is smooth and non-digressing, heading straight towards the desired destination. The fairly good job of the script-writer has got a boost by the outstanding job done by the dialog-writer.

I consider the scene in which Kamal enquires Sunita of her relation with Mohan and she, taken aback and hurt within herself by her husband’s suspicion, refuses to explain; as the best scene of the movie. When she asserts that she won’t explain her relation with Mohan but now onwards she won’t have any relationship with Kamal, it was the first genuine declaration of women’s lib in mainstream Bollywood movies. Her dialogue that she wonders what she had seen in Kamal to fall in love with him, clearly depicts her deep anguish.

The efforts of the writer and the director have been ably supported by the talented performers. I consider this movie among the three best performances of Mumtaz (the other two being Tere Mere Sapne and Aaina). Whether in the form of the young sweetheart or the newly wedded and highly romantic wife or the clean-hearted and kind woman, sympathizing with the lonely and aggrieved neighbour who happens to be her husband’s friend or the woman of self-respect, not ready to furnish any dignified clarification to her unduly suspicious husband or the torn lady in her father’s home or the mature mother, getting her daughter married and still longing to see the father of her daughter; Mumtaz is simply outstanding. Saying anything about Sanjeev Kumar is always trying to show lamps to the sun. He was one of those rare actors who could never act bad. And now about Rajesh Khanna, despite the criticisms, I always considered him a good actor. At least in this movie, he has acted brilliantly in the role of first a loving and later a suspicious husband and further later a repenting person, striving for atonement and making amends. The supporting cast including the comedians has done well. Even the leading pair has done hilarious comedy in the song – Jai Jai Shiv Shankar.

Technically and production value wise, the movie is decent as expected from J. Om Prakash. It’s a nice entertainment with a message, no doubt.

Finally, while recommending this movie to all, I reiterate my stand which I had mentioned in some earlier review – Communication gap is the biggest enemy of all relationships. It’s better to communicate and clear the things propping up in your relationships, especially the close and important ones, instead of fostering suspicions and misunderstandings in your heart. Just take a lesson from the character of Kamal in this movie and never allow suspicion to creep into your significant relationships. Have faith in your partner’s fidelity and clarify every issue through free and frank communication before a molehill turns into a mountain which you may find too high to cross over.

6 Responses to When suspicion eats up the marital bliss