Today is the birthday of Zohra Sehgal who had left for her heavenly abode on 10.07.2014 after spending 102 years on this planet with each one of them brightening with her never-say-die spirit.  She truly deserved to live for more than a century. The great artist who was an icon of vivaciousness was born on 27th April, 1912. The really bold lady who was much ahead of her time and a true symbol of woman-lib was a multi-talented artist. She was a stout pillar of Indian theatre, a dancer-cum-choreographer-cum dance teacher par excellence, a great cine-actress and what not ! She lived her life on her own terms and always maintained the true spirit of living a meaningful and energetic life –  ‘Never say die’.  Interestingly, she had acted in a TV series titled as Never Say Die only which was a comedy and was telecast on a channel in U.K. during the late eighties.

Her first movie as an actress was Dharti Ke Lal (1946) by Khwaja Ahmed Abbas whereas her last movie as an actress was Saawariya (2007) by Sanjay Leela Bhansali. While paying my tribute to this brave woman born in a Muslim family a century ago who went ahead to live a life full of vigor and vivacity, drawing respect from all the quarters of the society, I am reviewing a movie which was one of her final movies. It’s Cheeni Kum (2007).

Cheeni Kum (less sugar) is a comedy whose story is true to the spirit of Zohra Aapa. Here she plays the role of a very aged woman Mrs. Gupta whose son Buddhadev (Amitabh Bachchan) is a bachelor even during his sixties. He runs one of top restaurants of London and rolls in money but lives without a woman in his life much to the anguish of his mother (Zohra Sehgal). Destiny brings him into contact with an Indian tourist Neena (Tabu) and he falls for the charms of a girl thirty years junior to him in age. After initial teasing and ‘no-no’, Neena also falls in love with this man who is old by age but young by heart. Buddhadev’s mother readily agrees for their marriage because it’s something she’s been waiting for decades but making Neena’s Delhi-based father Mr. Varma (Paresh Rawal) consenting for this marriage is a Herculean task because the aspirant groom is older than the hoped-for father-in-law. The movie concludes on the desired note after some interesting twists and arranging not only rib-tickling but also heart-piercing and sentimental moments for the audience. 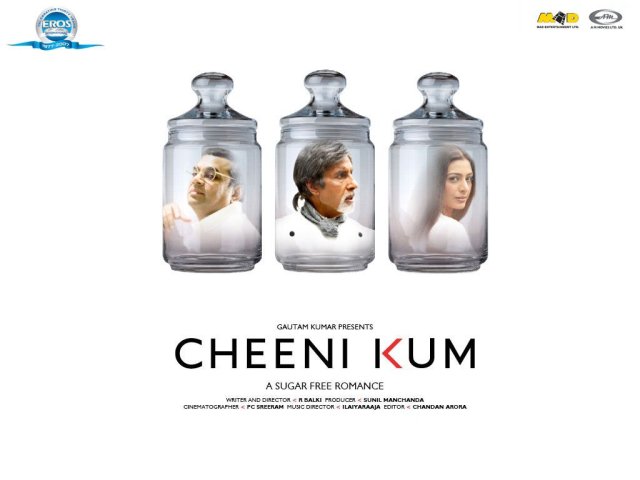 The title of the movie has been kept as Cheeni Kum (sugar in little quantity) because the first encounter of the lead pair starts with the preparation of Zaafraani Pulaao in the hero’s restaurant for the heroine who is dissatisfied with the dish prepared on her order and then the hero who considers himself as a great chef, tells her that Zaafraani Pulaao is to be prepared with a little amount of sugar only because it shouldn’t be very sweet. Perhaps the filmmaker has taken this recipe to his heart and he has also not presented an out and out comedy. There is an ample dose of sentiments also through the character of a little girl fondly called as Sexy (Swini Khera) and her sad demise leaving the lead characters especially the Mrs. Gupta and her son as soaked in grief.

The movie is undoubtedly very interesting without boredom at any place and that’s the victory of the writer-director R. Balki whose maiden effort in the form of this movie is highly laudable. And the novel story idea combined with the entertainment value being the USP of this movie, it got box office success also. At places, the movie appears to be an adult comedy and is in danger of crossing the boundary line of decency but the talented director has not allowed it to go like that and kept this issue under check.

All the technical aspects are up to the mark. Musical score prepared by Ilaiyaraaja is completely in sync with the mood of the movie.

Both Amitabh Bachchan and Tabu are highly talented actors and they have sparkled in this movie right from its opening to its conclusion. Their on-screen chemistry is amazing and heart-conquering. They have proved that the director has chosen the perfect cast for his story. Paresh Rawal, child artist Swini Khera and all the supporting cast members have also delivered admirable performances.

And finally, Zohra Sehgal. Zohra Aapa’s vivacity, openness and a desire to live every moment of her life to the full sans knowing any bounds for her has found its expression in her role in Cheeni Kum also. During her lifetime, she used to assert quite boldly without any fear that it’s sex which always kept her going. In this movie also, she’s shown as fond of watching sexy movies, never mind her (highly) advanced years. She has done superbly and instead of acting, has lived her role. Alongwith others, she is also one reason to watch this movie.

While paying my tribute to the Grand Young Lady of the world of art, I recommend Cheeni Kum as a very entertaining movie made on a novel theme to all the movie buffs. I do not term this movie as something great or classic. All the same, it’s fair to say that it’s a different as well as a very well made movie.

10 Responses to Long live Zohra Aapa ! An icon of Zinda-Dili !