Posted on September 13, 2018 by Jitendra Mathur

Today is Ganesh Chaturthi or Vinaayak Chaturthi, the day of Lord Ganesha, the god of wisdom. He is also known as the Vighneshwara, i.e., the remover of obstacles (appearing in the way of any good work). As per the Hindu mythology, he is the god who is worshipped before anybody else whenever something is to be done. Even the idiom in Hindi used for the expression – ‘to begin a work’ is – ‘Shreeganesh Karna’. Lord Ganesha has the head of an elephant and hence elephants are symbolic of him in the religious psyche of the Indians. On this occasion, I am presenting a review of an old Hindi movie whose story was based on the relationship of some elephants with the protagonist. This movie is Haathi Mere Saathi (1971) starring Rajesh Khanna and Tanuja with four elephants (and many other animals also). 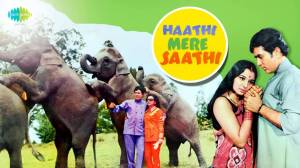 Haathi Mere Saathi (elephants are my buddies) tells the story of a motherless boy – Raju (Rajesh Khanna) who, being lost in his childhood, is saved by four elephants and taken back to his father who, in his dying moment, instructs him never to leave the company of those elephants and to always consider them as his Saathis (buddies). Raju grows up in their company and they always help him in all kinds of situations. One elephant out of these four, named as Ramu is actually the first among equals in them and he is the special buddy of Raju. Due to him only, Raju comes across Tanu (Tanuja) who is the daughter of a rich man. When Raju loses his wealth due to losing a lawsuit, he loses his prospects of marrying Tanu also. However his genuine buddies, i.e., the elephants help him in not only earning money but also bringing Tanu back to his life. He develops his own private zoo and calls it – Pyar Ki Duniya (the world of love) with the relentless support of the elephants, Tanu and a young boy – Chhote who was earlier the assistant of an unscrupulous mountebank. He becomes rich and finally wins Tanu’s hand also from her father. They get married and beget a son.

The trouble strikes with Tanu’s becoming an apprehensive and sceptic mother who starts doubting the nature of the elephants, lest they should harm her child (whereas in reality, the elephants themselves are quite concerned for the welfare and safety of the child). This issue leads to her break-up with Raju and she moves to her parental house. A heart-broken Raju has nobody to solace him except his buddies, the elephants. There are some baddies also, ever ready to harm Raju, viz. the unscrupulous erstwhile mountebank (and later a released jailbird) and the wicked owner of a circus who is the competitor of Raju in this entertainment business. In the end, Raju’s best friend, Ramu elephant sacrifices its life to set everything right in Raju’s life. 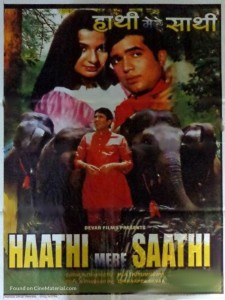 Written by Salim-Javed and directed by M.A. Thirumugham, this movie is actually a brain-child of M.M.A. Chinnappa Devar who can be considered as the greatest and the most passionate filmmaker of Indian cinema in the context of making animal-based movies. A genuine animal-lover Mr. Devar always loved to make movies with the significant roles of animals in them. And Haathi Mere Saathi is perhaps the most successful and popular such movie made by him. The animals and especially the elephants have done marvellously and they are in fact, the soul of the movie. All the sequences involving them are simply superb. Some of them are entertaining and some of them are so touching that any sensitive person may find tears coming out of his eyes while watching them. The last journey of Ramu which contains the memorable song – Nafrat Ki Duniya Ko Chhod Kar Pyar Ki Duniya Mein Khush Rehna Mere Yaar (Rafi) is one such scene only. 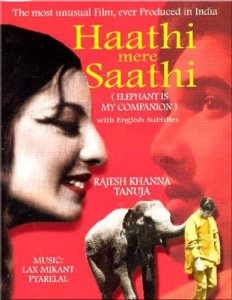 The movie is thoroughly entertaining as well as impressive but the length seems to have been decided according to the norms prevailing in that period, else a few superfluous sequences could have been done away with and the movie could have been shortened by 15-20 minutes. All the same, the viewers cannot complain because of the entertainment quotient being very high. The movie boasts of a high production value and technical excellence.

Though the main performers are elephants and other animals only, the human performers also have done justice to their roles. The movie had come in the heyday of Rajesh Khanna and it is one of his all time great blockbuster movies. He is at his emotional best in the movie, keeping his patent mannerisms under control. Tanuja has done well first as a loving sweetheart and then as a skeptic mother. The complete supporting cast including the baddies (K.N. Singh and Sujit Kumar) has rendered ample support to the lead cast. 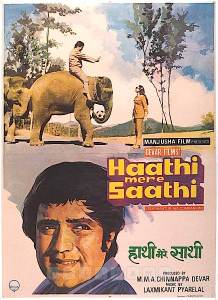 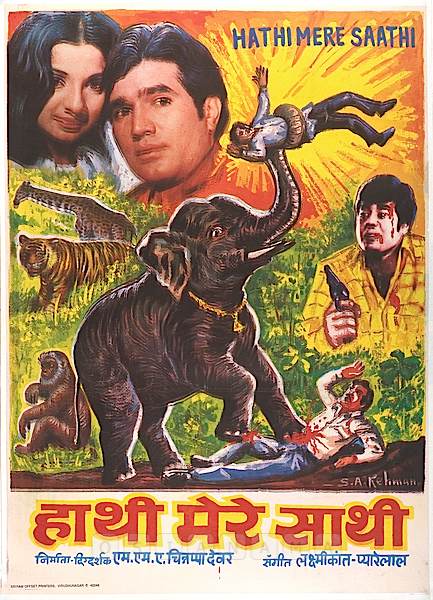 The movie is not a preaching type. In fact, this movie and all other movies made by Mr. Devar are such that they deliver the message of treating the animals with sensitivity through pure entertainment only. They are nowhere loud in saying anything, the message reaches the viewer automatically in a subtle way.That’s why the message though hackneyed, does not bore. Instead, it touches and moves the viewer deep within. I pity that now-a-days our so-called animal-right activists cannot arrange the closure of the slaughter-houses but they can restrict the artistic creativity of the filmmakers by prohibiting them to use animals in their movies. That’s why filmmakers like Mr. Devar cannot get an opportunity now to show their cinematic excellence with the use of live animals. 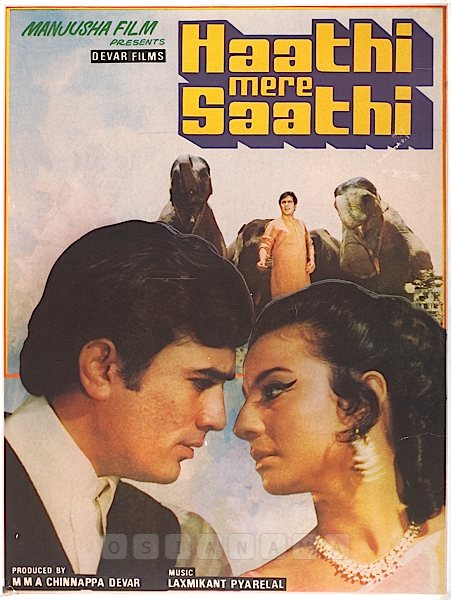 I firmly believe (through my own experience) that animals are in some ways far better than the human-beings because they possess the virtues of gratefulness, loyalty and love. Now-a-days also, a dog in the area of my present residence (BHEL Township at Hyderabad) approaches me whenever it sees me and sniffs and licks me with affection without demanding anything (it does not do so under expectation of some food from me). Betrayal, ungratefulness and backstabbing are the features of the human-beings and not the mute animals who seldom bite the hand that feeds them.

Today, while bowing in devotion before Lord Ganesha and wishing all my friends on the occasion of Ganesh Chaturthi, I wholeheartedly recommend this great entertainer to all kinds of movie-buffs. I wish, the makers of the blockbusters starring Rajesh Khanna re-release all his superhit movies in theatres.