First of all, I sincerely thank my dear friend and esteemed blogger Deepak M.R.  for inspiring me to write a review of this classic comedy by the legendary director – Hrishikesh Mukherjee. I am sorry for being late in posting this review. The delay took place because I wanted to watch it again before writing the review.

Golmaal (1979) is one of the best and (commercially successful) movies of the perennial simpleton of Bollywood movies of the seventies – Amol Palekar. However, despite his straightforwardness, sincerity to work and middle-class manners, he is not that simpleton in this movie. He is smart enough to tackle his practical problems with the contingency approach of management and befool his employer by creating the fake identity of his look-alike twin brother. And this is the Golmaal (confusion / hodgepodge) in this movie which consists of not only the fake mother of the hero and his sister but also her (fake) look-alike twin sister as well. The end result of this Golmaal is plain and simple – laugh-filled healthy entertainment for the audience. 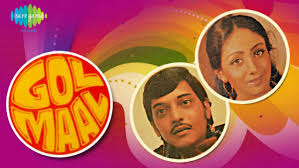 Ram (Amol Palekar) is an orphan who lives with his sister Ratna (Manju Singh) and needs a decent job after passing the C.A. exam (just like the writer of this review). His maternal uncle – Kedar (David) directs him to an industrialist Bhavaani Shankar (Utpal Dutt) who is not only orthodox and old-fashioned but also a bit finicky. He does not like youths taking interests in extra-curricular things and has a special disliking for the clean-shaven males (not sporting a mustache). Ram presents himself before him the way he wants his employee to be and soon wins his confidence too through his sincere work. However the trouble starts for him through his being caught by Bhavaani Shankar while watching a Hockey match. Now to save his job, he creates the fake story of his vagabond look-alike twin brother – Lakshman. A new twist arrives with Bhavaani Shankar’s hiring Lakshman’s services to take music tuition of her daughter – Urmila (Bindiya Goswami). The young pair falls in love. Further, since Ram had taken leave to watch the Hockey match under the excuse of his mother’s illness, now he has to create a fake mother also who is a theatre artist – Kamla Srivastav (Deena Pathak). Even worse, when she is caught by Bhavaani Shankar in a party, her fake twin sister is also to be created. And the climax comes when Bhavaani Shankar decides to marry his daughter to Ram but she is willing to marry Lakshman (without knowing like her father that both are the same). The laughter-filled climax leads to the union of the lovers and clarity of everything before Bhavaani Shankar (i.e., resolution of the Golmaal). 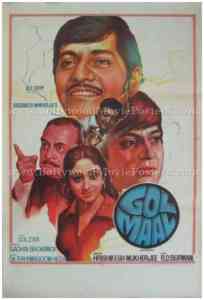 This story based on the plot of fake identities and the lies spoken is not only full of laughs and entertaining sequences but also touches at several places through the human relations and sentiments among the middle class people. The brother-sister relation, the mother-daughter as well as the mother-son relation and the concern of the benevolent maternal uncle for his nephew and niece, everything is heart-warming and creating sublime feelings in the viewers. The characters of the helping friends of the hero are also to be seen in this context. Right from the start to the very finish, the movie is highly entertaining and impressive by all means. 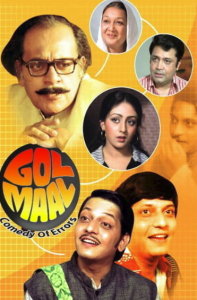 Amol Palekar was a master in performing such roles and it is undoubtedly one of his best performances. The artist matching him in performance is Utpal Dutt. Their amazing on-screen chemistry was later seen in Naram Garam (1981) too (which I found even better than Golmaal). Both these great actors have generated unlimited fun for the audience with their hilarious interactions. Deena Pathak, Manju Singh, Deven Varma, David and the other supporting actors in cameos, everybody has done well. Bindiya Goswami has filled the quota of heroine.

Director Hrishikesh Mukherjee demonstrated his mastery in not only profound movies but also comedies. Golmaal was a box office hit because it effortlessly won the heart of the Indian audience. The movie does not contain a single boring scene. It starts hilariously and it ends hilariously as well. A perfect entertainment.

Technically the movie is up to the mark. Hrishi Da’s movies are always wrapped in simplicity. The same is the case with Golmaal. A middle class family environment has been maintained throughout the movie and there is no artificiality visible anywhere, may it be the office or the households. The length of the movie is also optimum.

Golmaal has enormous repeat value. Anybody who watches it once, likes to watch it again. Hence I recommend this classic comedy from Bollywood cinema unconditionally to all and sundry. Watch this laugh-filled story embedding Indian family and social values once on my recommendation and you will undoubtedly watch it for the second time without anybody’s recommendation.