Greenery of joys and thornful path for lovers

After posting my article on the top Bollywood love stories, I realized some time later that accidentally I had omitted one of my all time favourite love stories from that list. That movie is Hariyali Aur Rasta (1962). Now, correcting my error (which I repent very much), I am penning a full-fledged review on this classic black and white movie.

Hariyali Aur Raasta is a musical journey in the beautiful backdrop of Darjeeling with Manoj Kumar and Mala Sinha playing childhood lovers – Shankar and Shobhna. Shankar believes that they will be united but Shobhna is apprehended with the thought that lovers have to be prepared for the thronful path (Kaanton Bhara Raasta) also in their life alongwith the joyful greenery (Khushiyon Ki Hariyali). Her apprehensions come true when her father who is the trustee of the estate of the late father of Shankar, asks her to leave aside from the path of Shankar’s marriage with Rita (Shashikala), fixed in childhood by their parents. The story takes several twists and turns with the highly melodious and sensitive songs and ultimately leads to the re-union of the separated lovers after many years. 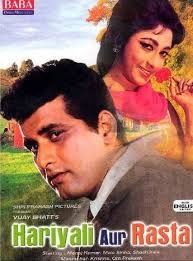 The movie has been ably directed by Vijay Bhatt which keeps the audience glued to the screen. Right from the emotional scenes of the childhood of the pair, to the love-filled teasings of the now college-going lovers, to the numerous twists in the tale; everything is perfectly in place. The movie is filled with emotions and emotional situations. The character of the Christian lady (played beautifully by Krishna Kumari) who is like a mother figure to the motherless Shankar and her tragic death because of the wrongdoings of her bribe-taking dishonest husband (Om Prakash), deeply move the audience. The director has forced a few laughs in the otherwise serious movie perhaps to provide some relief to the audience (through the character of Om Prakash) which could have been avoided because they are not in line with the sentimental mood of the movie. 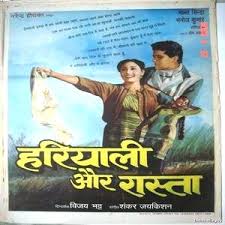 The performances are good. The lead pair has done well. Shashikala as the negligent wife and mother is mostly okay and somewhere over the top. However it is the supporting cast which deserves a special mention. Manmohan Krishna as the honest, dutiful trustee of the estate and the affectionate guardian to Manoj Kumar who had become an orphan in childhood, has done a terrific job. I have already mentioned about Krishna Kumari. Other actors including Om Prakash (sometimes over the top as an alcoholic) and the child artists also have ably supported the lead actors and the narrative.

The cameraman has captured the green beauty of Darjeeling in the sixties very well (despite the limitation of its being a black and white movie). The production value and technical aspects are also well-handled. 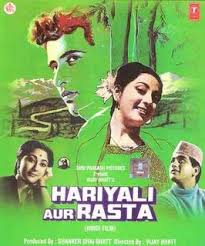 The songs are too many but they are not forced in the narrative. They are situational and help in carrying the story forward. Nowhere the viewer is bored and genuine sympathy is generated by the storyteller for the separated lovers. The climax of the movie is quite impressive.

The biggest plus point of the movie is definitely the melodious music composed by Shankar Jaikishan. Most of the songs are timeless classics. Whether you take the immortal solo of Mukesh – Teri Yaad Dil Se Bhulane Chala Hoon or you take Mahendra Kapoor’s memorable song, sung on the screen by a boatman – Kho Gaya Hai Mera Pyar or the title song by Lata (Ye Hariyali Aur Ye Raasta) or the classic duets of Lata and Mukesh – Ibtda-e-Ishq Mein Hum Saari Raat Jaage, Bol Meri Taqdeer Mein Kya Hai and Laakhon Taare Aasmaan Mein; each one is simply a gem. The lori (lullaby) sung by Lata which contains the gist of the story – Ek Tha Raja Ek Thi Rani, is also praiseworthy.

Summing up, Hariyali Aur Raasta is a treat to watch for the lovers of musical love stories. Watch it once and you will love to watch it again.