Till the beginning of the decade of seventies, abortion was illegal in India and therefore, the trouble of pregnancy without marriage was ticklish to handle. Naive and innocent girls falling in love with guys and then surrendering physically to them out of sheer love in their hearts and visualizing themselves to be their brides in future, suffered like anything in that era. And so, Bollywood presented a plethora of movies whose theme was an unmarried girl’s pregnancy and her giving birth of a child whose father is not there to render his name to the newborn. Ek Phool Do Mali (1969) is such a movie only which has gone a couple of notches above many other similar movies due to good direction, good acting, good music and beautiful locations of the Himalayas.

The story of Ek Phool Do Maali (one flower, two gardeners) starts with Kailash (Balraaj Saahni) who loses his complete family in a mishap and becomes completely lonely. To give a meaning to his life, he starts a mountaineering school in the Himalayan region. One of his students is Amar (Sanjay) who falls in love with a local girl – Somna (Sadhana) who lives with her widowed mother – Leela (Durga Khote). The love of Amar and Somna leads to their physical intimacy and Somna’s pregnancy. Amar heads for a mountaineering expedition after whose completion, he is to marry Somna. However an avalanche hits his group and it is known that all the group members have lost their lives.

Now Somna is in deep trouble because she is pregnant without marriage and is left with no path to survive in the society. Moreover a baddie – Shamsher (Shyam Kumar) tries to molest her. Kailash saves her and Shamsher is sent to the prison. Besides, Kailash upon coming to know of her pregnancy, helps her by marrying her. When Somna gives birth to a baby boy, Kailash gets a recourse for his life. Despite the kid not being his biological son, he moves into the shoes of a proud father and pours every drop of love in his heart on the little angel. Somna, though not being able to forget her first love that led to her motherhood, feels indebted to Kailash and respects him very much. Now comes the twist in the middle of the tale.

Amar comes back alive after many years and shocked to find Somna as the wife of Kailash. Putting a stone on his heart, he keeps on interacting with Kailash and his family. However he feels a strange bond between himself and Somna’s little kid. There’s something that effortlessly drags him time and again towards the little boy. And one day, he comes to know its reason. The knowledge of the fact that the little boy is his son only, makes him restless like anything. Now all the three protagonists put forward different proposals. Amar wants to get his son and leave the place with him whereas Kailash proposes him to take away both Somna and his son, leaving him behind. But it’s the proposal of Somna that both these males have to accept. She knows that Kailash loves the kid so much that he won’t be able to live without him. Further, she feels that it will be ungrateful on her part if she leaves Kailash this way. She, therefore, asks Amar to leave the place and let her family live in peace. However destiny has other plans to conclude this triangular tale. Shamsher gets released from jail and abducts the kid, paving the path for a Bollywoodish finale of the movie.

Ek Phool Do Maali is a highly entertaining as well as highly impressive movie. Director Devendra Goel has directed the story of Mushtaq Jalili very well and presented an impactful movie. This more than 150 minutes long movie bores at no place and there are many touching sequences that are able to move an emotional viewer like anything. The post interval session involving the sentimental tussle between the foursome, i.e., the kid, his mother, his biological father and his fostering father keeps the viewer hooked and leaves an indelible imprint on his / her heart. Ditto for the climax and the ending of the movie. The first half is mainly devoted to romance and comedy generated by the lead pair of Amar and Somna which is able to tickle any romantic heart. 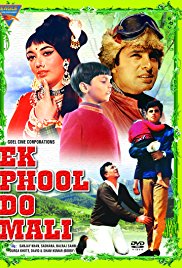 Technically this coloured movie is simply superb. The cinematographer (Keky Mistry) has caught the silvery beauty of the Himalayas in an outstanding manner. The complete movie is an eye-candy with great aesthetic value. The action sequences are well executed and due to the entertainment value, the length also does not appear to be on the higher side. Choreography, editing and background score are perfect. Even the title of the movie is quite apt, giving the kid the analogy of a flower and his fathers (biological and  fostering) the analogy of gardeners.

Ravi’s enchanting musical score is another major plus point of Ek Phool Do Maali with the touching lyrics coming from the pen of Prem Dhawan. On one hand, we have Manna Dey’s evergreen song – Tujhe Sooraj Kahoon Ya Chanda signifying a father’s love, on the other, we have Rafi’s immortal song – O Nanhe Se Farishtey in which the unknown bond between a child and his father gets highlighted through the sentiments of the father. The album also contains Asha’s romantic numbers – Sainya Le Gayi Jiya Teri Pehli Nazar and Sajna Sajna O Sajna Tere Pyar Mein Main Gayi Kho Sajna and also the popular Rafi-Asha romantic duet – Ye Parda Hata Do. Music director Ravi himself has also sung a very good philosophical song – Kismet Ke Khel Niraale Mere Bhaiya.

Performances are all admirable. Sanjay (Khan) and Saadhana made a lovely on-screen pair and both have done well. The child artist – Master Bobby has delivered a touching performance. All the supporting actors have done their parts well. And the best performer is Balraaj Saahni who was considered a school of acting in his time. 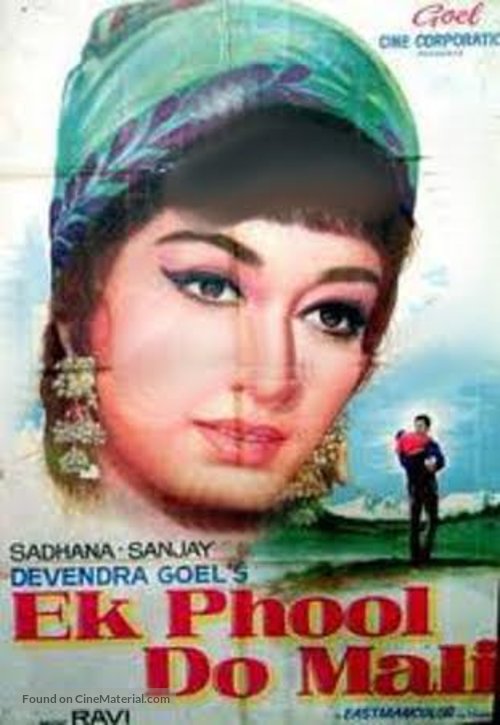 Ek Phool Do Maali was a super hit when released. And its quality is still intact even after passage of such a long time since then. It has a great repeat value and can be seen many number of times. Fortunately, I had watched it on the big screen (more than three decades back). However it is equally enjoyable on the small screen also. I wholeheartedly recommend this romantic as well as sentimental drama to the movie buffs of all categories.

5 Responses to One flower, two gardeners