The path leading to truth is bound to be thorny

Being an idealist since childhood, when myself happened to see my would-be wife on 28.06.1995 for the first time and when we had a talk with myself being in the privileged position to ask questions from her, I asked whether she believed in truth, honesty and similar ideals. Well, she did believe in them but she was more practical than me as the friend (Sanjeev Kumar) of the hero (Dharmendra) of Satyakam (1969) is.

More than two decades have passed since then and today when enough water has flown under the bridge and now our daughter has entered her B. Tech course, I ponder over that silly question of myself and now put up another, more relevant, question to myself whether I still believe in these ideals. To be honest (at least in this context), I find it difficult, indeed very difficult to answer.

This classic Hindi movie directed by the legendary filmmaker Hrishikesh Mukherjee starts with the assertion that the most sacrosanct quest is the quest for truth. One should strive for getting the truth, reaching the truth. But pious intentions do not and cannot ease out the difficulties, hardships and pains to be faced in this regard. The hero of this movie named as Satyapriy Acharya is determined to follow his family ideals in his practical life. Like Mahatma Gandhi, truth is God to him. And he sets out in pursuit of truth only after obtaining an engineering degree.

The story starts in the period when India was on the verge of getting political independence from the colonial rule and the princely states were, in all likelihood, going to lose their existence in the sovereign republic of India. The common psyche of the Indians was filled with enthusiasm, optimism and hope for a better future. Our hero whose the only relative is his grandfather Satyasharan (Ashok Kumar) living in isolation, away from the practical (and cruel) world, also shares this psyche with his countrymen.

The movie tells Satyapriy’s journey towards truth. He speaks truth. He lives truth. However the thing that he forgets that in this practical world, truth also needs the worldly might to survive. A man like Satyapriy may be able to pursue truth through sheer inner strength but if he is not living in isolation and has to survive among those who are not like himself, day-to-day life may become hell for him. Following truth only in his life, he is likely to find that gaining worldly comforts, peace of mind and a normal life has become a mirage for him.

And that’s where the real inner strength is required. The path leading to truth can never be flowery. It’s bound to be thorny and the traveller of this path should be mentally prepared to sustain all the resultant wounds and the pain emanating from them. The hero of this movie, i.e., Satyapriy is such a person only. He sustains everything and lays down his life in the end while treading the path of truth only. Does his death matter for anybody? Yes, for his wife Ranjana (Sharmila Tagore) and her kid whose biological father is not the hero but a rapist (Manmohan). And through them only, the aged grandfather of the hero realizes what it takes to follow truth in the real sense.

According to a Hindu mythological tale, Lord Vishnu had taught a similar lesson to Sage Naarad who was proud of his devotion to Vishnu but could not utter his name even once during the execution of an assignment of carrying a brimful container of oil on his head in which he was not allowed to spill even a single drop of oil out. Similar is the test for the follower of truth. Following truth while living in isolation or in your comfort zone is no achievement. You are proved as a genuine truth lover only when you are able to follow it amidst the worldly life in which this love of yours is tested on almost every step. Once realizing it like Sage Naarad, the hero’s aged grandfather adopts his daughter-in-law and her kid and takes them to his place while earlier he had not allowed the kid to ignite the pyre of Satyapriy (the Hindu custom of Mukhaagni) owing to the kid’s not being the biological son of Satyapriy.

And then the little boy is christened in the end (and the title of the movie is taken from that only) as Satyakaam after the name of Satyakaam Jaabaal from the Hindu mythology who had got his name from his truth-loving mother – Jabaala and not his father.

It’s a pain-soaked movie rendering a message to the residents of politically independent India that their real test lies in maintaining their inner strength to follow the ideals of the freedom struggle in free India which was (and is) a much more difficult task than to gain political freedom from the foreign rulers. When this movie was made, the Indian masses had started feeling disenchantment from the words of the leaders and the ideals propagated for decades with the promise of a better future and better life for the commoners. 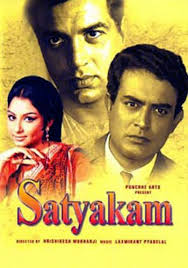 Satyakaam is based on a novel of eminent Bangla author Narayan Sanyal telling a heart-piercing story. How a person who is determined to follow the path of truth only, suffers in the hands of the greedy, biased and cruel world; is shown realistically in this story. As said earlier, truth also needs tangible might to take on its worldly adversaries and survive their onslaught. However, asserting quite pessimistically, the genuinely truth loving, non-compromising people seldom gain such a might. Ruination only is their destiny. Hrishi Da, one of the greatest film directors of India, has done complete justice to the spirit embedded in the novel.

The writer and after him, the director has presented the truth-loving hero as a normal human-being only with the human weaknesses of hesitation and momentary cowardice in him. He is not able to save the chastity of the heroine for that reason only and later abstains from taking her inside his family home because of the issue of the family honour as the heroine is the offspring of a sex-worker.

Besides, it’s also depicted that maintaining a normal conjugal relationship with a raped woman is even more difficult than to marry her as the hero is never able to be normal with his wife in their intimate moments and the wife deeply feels the pinch of it.

Manoj Bajpayee starrer Shool (1999) came three decades later than this movie. Made with the backdrop of the police system of India, though Shool contains an entirely different story and milieu, somehow I feel that the undercurrent is the same in both these movies with the sufferings and the denouement being the same for the heroes of both these movies.

Musical score of Laxmikant Pyarelaal is good but not great. This low budget movie is technically good. Performance wise talking, all including the heroine – Sharmila Tagore and child artiste Saarika who used to play the roles of a boy child those days (credited as Master Suraj), have done pretty well. Sanjeev Kumar who plays the role of Dharmendra’s close friend Narendra who only is the narrator of this story, is also perfect. His role is that of a practical person who believes in truth but compromises and adjusts wherever essential to survive.

However the movie belongs to Dharmendra and Dharmendra only. He did not get any award for his role in this movie but it seems that he has not acted but lived Satyapriy on celluloid. This is perhaps the best performance of his career.

Late Hrishi Da himself had termed Satyakaam as the best movie ever made by him. The theme of this movie also reminds me of the epic novel of Yashpaal – Jhootha Sach. This masterpiece is not meant for the regular entertainment seekers. It’s for the audience of profound, well-meant cinema only.

My final words – either don’t follow truth or be ready to undergo the bitterest and the most painful experiences of your life in this bid of yours because you can make yourself follow truth but you can’t make the world around you to do the same.