A pulp fiction novel which deserves an award

Popular Hindi novelist Surendra Mohan Pathak has asserted on many occasions that pulp fiction novels are by no means literature. They are just light-reading stuff for timepass in the similar way as the regular formula-based movies are. That’s why, he maintains, they are neither reviewed by the critics, nor considered for any literary awards.

He is right because the bulk of the pulp-fiction novels published in India during 1960-1990 period when reading novels was a craze in our country and developed a huge market for the pulp-fiction work, falls into that category only. However in the crowd of thousands of pulp-fiction novels published in India, there came some excellent ones too which could have been considered for awards provided they had been published on good quality paper with good binding and glossy dust-jackets (and at a generous price) and without the tag of pulp fiction. Today I am reviewing such a Hindi novel penned by none other than Surendra Mohan Pathak only which despite being categorized as a pulp fiction novel, is quite superior in terms of its theme and more so in terms of the treatment of that. The title of this novel is Dial 100.

We all know that telephone number 100 is the helpline number of the police. Whenever anybody needs police help, he / she can dial telephone number 100 which rings in the police headquarters of the city concerned. It is not just a telephone number which is easy to remember but it is a symbol of the police system which is looked upon by the society as a mechanism to eliminate the crime and protect the innocents.This can be compared to the famous bell of justice at the palace of the emperor Jahaangir, asserts the author through the mouth of the main protagonist.

India boasts of very less honest and dutiful cops though a lot of movies have been made and novels have been written on the life and sacrifices of such scarcely available cops. In Dial 100, Surendra Mohan Pathak has also told the saga of such a cop only. The plot may seem hackneyed today but it was not like that when this novel was written. Besides, the novel has been written in a highly realistic manner (despite having an idealistic tone through the lead character) and that’s why it impresses and moves the reader in the real sense. The story of the novel or say the story of the life of the lead character haunts the reader after he is over with the reading. And that calls for a lot of praise for this novel. 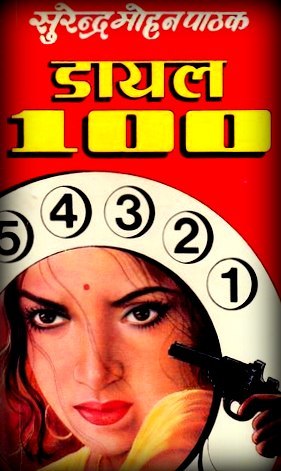 Dial 100 narrates the story of inspector Vikram Singh who is in his forties now after spending around 25 years in the police service which he had joined as a constable and by getting some out of turn promotions, has found himself now to be an inspector. However alongwith promotions, he has faced three suspensions and several transfers courtesy his doing his duty diligently without fear or favour and inviting the wrath of his ‘practical’ superiors. After the sad demise of his newly wed wife who had been killed by certain criminals in order to teach him a lesson, Vikram Singh decided never to remarry and is spending a completely lonely life, living by sword. Now he has got a young subordinate, sub-inspector Rajeev who loves a deaf and dumb girl – Seema who is the granddaughter of a furniture-shop owner. Rajeev is very much impressed by his idealist superior, i.e., Vikram Singh and desires to become like him in his career.

The story of Dial 100 takes off with the robbery of a jewellery showroom by some habitual criminals who have been joined by a jail-breaker convict – Kulbhooshan. Kulbhooshan is the sworn enemy of Vikram Singh because he only had arrested him. He had threatened Vikram Singh also to settle his score after his release from the prison. Now after running away from the prison, Kulbhooshan has two missions – 1. Settling his score with Vikram Singh and Rajesh Gupta who is the younger brother of the owner of that jewellery showroom and who had given testimony against Kulbhooshan in the court, 2. Recapturing his robbed wealth which he had hidden somewhere before getting arrested. After several twists in the tale, Kulbhooshan is rearrested by Vikram Singh while laying down his own life in that process. During that tussle between the criminal and the police, Kulbhooshan happens to kill the deaf and dumb sweetheart of Rajeev, i.e., Seema.

This story of the novel is felt much better when gone through the pages of the novel than as told in a nutshell in a couple of paragraphs supra. This is a novel which engrosses and appeals to the reader right from the word ‘go’ and keeps him spellbound throughout till the very finish. It inspires at several places and underscores the significance of moral values in an utterly natural way sans any rhetoric. It has a good dose of sentiments also. The author made my eyes wet by writing that after the demise of Seema, Rajeev married her dead body and considered himself as a widower for life. Do such true lovers still exist on this planet ? Yes, I think so. The species of true lovers is yet to become extinct.

Through the character and life of Vikram Singh, the author has very realistically portrayed what an honest and dutiful cop has to go through. How lonely he is in the department ! In the system ! Certain incidents pertaining to crime and investigation might have been borrowed from other sources but the overall structure of the novel and the emotional as well as inspirational treatment of the theme is the author’s original effort which makes him stand out in the crowd of hundreds of pulp fiction writers.

The author has very emotionally portrayed Vikram Singh’s mindset in his moment of death that arrives in the climax of this novel. Taking his final breaths, Vikram Singh recalls his various acquaintances and visualizes their reactions upon his demise. And most of his last predictions come true later. The more Kulbhooshan, the glamorous criminal is kept in the memory by the public, the more Vikram Singh, the dutiful cop is forgotten. After all, who was he ? An emotional fool who laid down his life for the sake of some hollow ideals ! Then what did he gain by sacrificing his life ? He gained one thing, asserts the author. His ideals are adopted by sub-inspector Rajeev who steps into his shoes and pounces on the criminals in the similar fashion. At least one person has been able to understand him and follow him. It’s no little success.

This novel is a signature novel of Surendra Mohan Pathak, bearing a clear stamp of his style which engrosses, impresses and moves. He has used flashbacks quite skilfully and not allowed any boredom to creep in amidst all the idealistic talks and the nitty-gritty of the corrupt and inefficient Indian police system.

This novel has immense repeat value and any Hindi reader would love to read it many more times after the first reading. Once a Bollywood movie had been planned to be made on this novel but the project could not materialize. Anyway, still it can be used to make an impressive movie. As far as myself is concerned, had it been in my right, I would have bestowed some literary award upon this novel.

A Chartered Accountant with literary passion and a fondness for fine arts
View all posts by Jitendra Mathur →
This entry was posted in Book Review and tagged Book Review - Dial 100 (by Surendra Mohan Pathak). Bookmark the permalink.