I was too much eager to watch Zindagi Na Milegi Dobara (2011) because I had liked its director, Zoya Akhtar’s maiden directorial venture – Luck By Chance (2009) very much. Hence I went to watch it with heavy expectations. The movie did not live to the level of my expectations, yet I found it as quite nice, enjoyable and impressive.

Zindagi Na Milegi Dobara (you won’t get this life again) is based on the lives (and their joint vacation as bachelors) of three friends – Hrithik Roshan who is a finance broker, running after money only; Farhan Akhtar who is stressful after knowing about his biological father and Abhay Deol who is going to marry Kalki Koechlin, the daughter of a rich businessman. There has been a resentment between Hrithik and Farhan in the past due to their common crush for a girl. Now they decide to have a vacation in Spain and that vacation not only makes them cross path with a sea-diving instructor – Katrina Kaif as well as Farhan’s biological father – Nasiruddin Shah but also provides them a new outlook for their lives. They learn to live ‘TODAY’ to the full instead of worrying about ‘TOMORROW’ or getting too much into ‘YESTERDAY’. 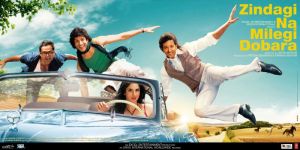 This movie seems to be a mix-chaat of Dil Chaahta Hai (starring Aamir Khan, Saif Ali Khan and Akshay Khanna), Rock on (starring Farhan himself, Arjun Rampal, Purab Kohli and Luke Kenny) and Dasvidaniya (starring Vinay Pathak). Like the first two movies contained a rift in the past between two friends from the group concerned, this movie also has one. Like the first two movies again, it also contains their friendly teasing, pranks, flirting the girls and joint merry-making before facing the harsh reality of life. And like the last one, it also underscores the importance of living the life at hand to the fullest before the dying moment arrives. However it does not reach to the level of any of these three. It is because of the weaknesses in the script which the director – Zoya has tried her level best to cover with the help of beautiful locales of Spain, Shaayari of her (and Farhan’s) father – Javed Akhtar, some style generated through the language and culture of Spain and finally, good thrill in the end. The same message had been conveyed more forcefully in Dasvidaniya through a different story. The second half of the movie is lengthier and better than the first one. The story takes off quite slowly in the first half and bores for the first 15-20 minutes.

Abhay Deol’s telling his friends that he had not proposed Kalki in the first place and she had misunderstood his showing her the ring bought by him for his mother, as proposing her; is contradictory to the opening scene in which Abhay persuades Kalki a lot to marry him.

I liked Hrithik’s repetitive saying to his friends in a scene – ‘Ye bhi likha tha’ (it was also written) very much because he echoed my views only. I firmly believe in destiny. Whatever is written (destined) , is bound to take place when the proper moment arrives.

This movie is a visual treat. The scenes under the sea-surface as well as in the heights of the sky are marvellous. Not only the production value is exceedingly high but the cinematographer has done a remarkable job from his side also alongwith the art director. Technically the movie is just superb. Even when the narrative seems to be boring a bit, the beautiful scenes passing on the screen keep the viewer hooked. The running of the deadly bulls in the climax and the heroes running (alongwith several others) to save themselves from them, is sensational.

The music is according to the mood of the movie. The song – Senorita has a clear stamp of the song – Hum Hain Naye, Andaaz Kyun Ho Purana from Farhan’s maiden directorial venture – Dil Chaahta Hai (whose composition was also created by the same music directors – Shankar-Ehsaan-Loy). The songs have been picturized well.

Performance wise talking, it’s mainly the movie of the three heroes. Hrithik has matured enough since his Kaho Na Pyar Hai days during the past one decade and his looks as well as performance is very impressive. Farhan Akhtar is not just a good director, he is a good actor also and he proves it again. But the show-stealer, in my opinion, is Abhay Deol who effortlessly acts and enters the skin of his character.

Among others, Katrina Kaif is not bad but her dialogue-delivery still leaves a lot to be desired. Kalki Koechlin is okay as an over-possessive and nagging would-be wife but she is definitely a misfit for the roles of Indian girls. Ariadna Cabrol is much better than these two (in the role of the Spanish girl). Nasiruddin Shah is fine in his cameo whereas a great actress like Deepti Naval has been wasted.

Well, the message to live every moment of your life to the full without worrying too much for the future or regretting the past is all right but the way the heroes easily move from place to place abroad, spend generously and always remain in eat-drink-and-be-merry mood without any monetary constraint; makes me think whether enjoying your life or brooding peacefully is also a luxury of the filthy-rich only. Can the people who have to earn daily to make both ends meet, afford such a luxury as the trio in the movie could do ? That’s why, myself, being a middle-class person with a modest earning; liked the movie but could not relate to it.