I love my India ? Childish !

Music director Shravan left for his heavenly abode on 22.04.2021. This review is a tribute to him.

Two slogans are usually found as floating on the air in India – the first one is in Hindi which is Mera Bhaarat Mahaan (my great India) and the second one is in English which is I Love My India. Producer-director Subhash Ghai made a full-fledged movie by writing the script on the basis of that second slogan only. This entertaining movie presenting a childish interpretation of I Love My India is Pardes (1997). 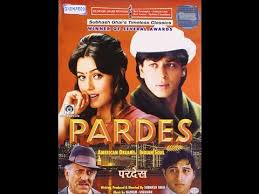 Pardes (foreign land) is the story of Kishorilaal (Amrish Puri) who is an NRI settled in US but has been nurturing the love for his motherland, i.e., India in his heart despite living away for it. Arjun (Shah Rukh Khan) is his foster son who has grown up with his real son Rajeev (Apoorva Agnihotri). Sorry to find most of his family members including his son as completely coloured in Western culture, Kishorilaal decides to arrange such a bride for his son who is soaked in Indian culture and values that through her the desired Indian Samsakaaras and life values reach his son and the generation next as well.

Kishorilaal’s quest for such a bride finds a perfect choice in Ganga (Mahima Chaudhary), the daughter of his childhood buddy Suraj (Alok Nath) who is living in India. He sends both Rajeev and Arjun to the house of Suraj to see Ganga and confirm that matrimonial alliance. However after the engagement of Rajeev and Ganga in India, Kishorilaal insists that prior to the wedding Ganga visits US and spends some time with his family in order to familiarize with her in-laws as well as the environment there. And there starts the trouble. Several undesirable things come to Ganga’s notice and she has to flee from US with the help of Arjun. Shortly, she is able to find out that Arjun, not Rajeev, deserves to be her life partner. Kishorilaal also realizes that it’s incorrect to cut the Indian girl from her roots and compel her to take root in a foreign soil. 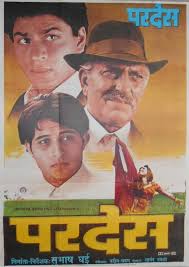 The idea behind the movie is definitely good and the conclusion rendered is agreeable. It’s a lesson for those parents of Indian girls who feel that by sending their girl abroad through her marriage with an NRI, they will be arranging a happy and prosperous life for her. Even when the boy’s family is wealthy and the boy earns well, it may not always be advisable because if the boy has grown up abroad, his personality and psyche must have been groomed according to the environment prevailing there and the girl brought up in India may not be able to adjust with him as well as in the family of the in-laws. Finally, mental adjustment matters the most in the marriage of a girl and not the wealth and the luxuries of her husband or her in-laws. But !

But Subhash Ghai who was considered an expert in making formulaic movies during that period, has not done proper justice to the story idea. To justify his theme and the conclusion of the story, he has taken different points and facets of that to the extremes and reduced many characters (in both the Indian and the foreign milieu) to mere caricatures. Love for India cannot be proved by shouting I Love My India loud (as done through a song of the movie). This love should reflect through understanding the Indian values and way of life. And it’s here where the movie falls flat on its face.

There are several ridiculous things in the first half of the movie in which the story moves at a snail’s pace. The most ridiculous of them  (at which I was beating my head in the cinema hall) is the Kabaddi match played between the two teams who are staking their claims on Ganga in order to take her away as the daughter-in-law of the respective families. The bet is that whosoever wins the match will take away Ganga through her marriage with a boy of the team. Such a laughable stock has been presented in a movie made on such a brilliant theme !

Arjun’s character appears to be selfish in the first half when he tries to convince Ganga for marrying his buddy Rajeev by telling lies as well as hiding certain truths about him from her because he is burdened by the obligations of Kishorilaal and willing to shift to India forever through his help only. His developing tender feelings in his heart for Rajeev’s would-be bride is also not convincing and in a way contradictory to his behaviour and attitude.

The would-be bride’s family agrees to send their daughter to the house of her would-be in-laws abroad, this itself is hard to digest. Though the filmmaker has clarified that they’re not at all willing to do so but submit to Kishorilaal’s insistence for that, nevertheless it appears to be quite unlikely. Considering the later developments in the story, their naivety in this regard appears to be impractical.

The second half of the movie is fast-paced with many twists and turns but they appear to be imposed to justify the case of the filmmaker and not evolving with naturalness. Personally I don’t feel that smoking and drinking make a bad boy. All the same, a good wife is able to make her husband (if otherwise he’s nice) get rid of such bad things after marriage also. As far as his promiscuity is concerned, this fact also appears to be suddenly thrown at the face of the audience (as well as the heroine). The boy’s father’s ignorance of this kind of nature of his son is a serious issue (especially when he’s bringing a girl from India to US and allowing her to spend time with his son prior to wedding) which the filmmaker has neglected.

The climax has also been dealt with in typical Subhash Ghai style which entertains but doesn’t impress. The heroine elopes with the hero without any love in her heart for him which doesn’t make much sense. In the end, the whole stuff of the movie appears to be something having pious intentions behind but not executed properly and honestly.

This lavishly made movie is technically superior. The only flaw in this regard is its excessive length. The editor and the director should have curtailed its length by at least 30 minutes by removing many unnecessary sequences. The overall form of the movie renders an impression that it was made under the hangover of Dilwale Dulhaniya Le Jaayenge (1995). However every movie cannot become DDLJ even with certain similarities in the story and the lavish style of filmmaking.

Shah Rukh Khan has done well replicating his DDLJ act in many scenes. Amrish Puri despite his confusing characterization, has also done very well in the author-backed role. He has also thrown glimpses of his role in DDLJ especially in the beginning as well as the ending part of the movie. The supporting cast is well in place except those characters who have been portrayed in a caricaturesque manner. Debutantes Apoorva Agnihotri and Mahima Chaudhary have delivered admirable performances. Mahima Chaudhary looks quite pretty. I did not find her as that good-looking in any other movie.

All in all, this formula-studded movie which was a box office hit also, is quite entertaining but does not do justice to its noble theme because it deals with the love for one’s motherland in a childish manner. The treatment of the subject is melodramatic for a major part of the movie. Love for the motherland should reflect in one’s attitude and deeds. It’s not possible by shouting I Love My India from the rooftop of one’s house or by singing and dancing on a song containing these words.

6 Responses to I love my India ? Childish !