Discussing the capital punishment in a mystery

Veteran actress Shashikala passed away on 4th April, 2021. This review is a tribute to her as she has played an important role in this movie.

Kanoon (1960) is a unique suspense thriller which is an all time classic from the black and white era of Hindi cinema. Can you imagine a Bollywood entertainer from the fifties and the sixties which is sans the regular ingredients of songs, romance and comedy ? No ? Please do see Kaanoon (law) which is devoid of songs, romance and comedy and yet it keeps you glued to the screen for two and a half hours. Its suspenseful drama is so gripping that the audience does not feel any need for any other Bollywood formulae in the narrative.

It discusses the relevance of the DEATH PENALTY or the CAPITAL PUNISHMENT too. The verdict of the moviemaker is that the death penalty should be done away with in toto. My own view is that let it be in the books of law, only to be awarded in the rarest of rare cases. It has its importance but considering the fact that once awarded, it cannot be reverted back even if it is known later that the verdict of the case was a faulty one; it should be awarded only selectively when the crime is quite heinous and there is little doubt in the accused’s being guilty. It should not be used as a weapon to seek revenge for the victim because it is not the job of the legal system to seek revenge. 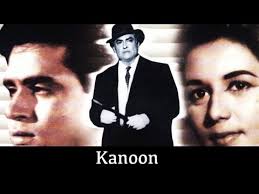 Judge Badri Prasad (Ashok Kumar) strongly opines that the capital punishment should be deleted from the book of Indian Penal Code because it is cruel and moreover it does not leave any scope to correct the faulty judgment in any case which is always likely because judgments are given on the basis of evidences and witnesses which might be misleading. The twist in the tale comes when a moneylender, Dhaniram (Om Prakash) who is after his borrower son, Vijay (Mehmood), is murdered. The interesting thing is that the judge’s would be son-in-law, Kailash (Rajendra Kumar) is the eye-witness to this murder and he is shocked to see that the murderer is the judge himself. Now when an innocent person, Kaalia (Nana Palsikar) is arrested and put under trial for this murder in the court of the same judge with Kailash being the defense lawyer, the mutual relations of the judge, Kailash and the judge’s daughter, Meena (Nanda) become tense and uneasy. In an unforgettable courtroom drama, Kailash accuses his would-be father-in-law to be the murderer and gets him arrested and put under trial for the murder. The truth is revealed in the end with the reiteration that death penalty should be considered redundant and deleted from the legal books.

I had watched this movie in December 1989 on Doordarshan during my stay at Kolkata (then Calcutta) when the results of the generals elections of India were being announced. In those days, Hindi movies were telecast on Doordarshan in between the announcements of the election results to keep the audience glued to the screen. I watched it in the house of my friend Ajay Jain which was at 12, Lower Chitpur Road. Due to the piecemeal telecast in between the announcements of the results, the movie ended at about 3 a.m. However despite losing my sleep on that night, I had no regrets because of the entertainment that I had got from this movie.

This suspense thriller is so intriguing that it engrosses the viewer from the beginning to the end without any boredom. The viewer just forgets that there are no songs, no romance and no comedy served to him. He only keeps on watching, holding his breath and waiting for the suspense to be revealed. Legendary producer-director B.R. Chopra has directed this movie with such finesse that it is considered a twinkling diamond in the highly decorated crown worn by him.

The performances are great. Ashok Kumar and Rajendra Kumar have delivered stunning performances in a neck-to-neck contest of excellence. Nanda, Jeevan, Mehmood, Manmohan Krishna, Shashikala, Nana Palsikar (won the award for the best supporting actor for this movie) and Om Prakash, all have done admirably.

As already said, there are no songs. However the background score is impressive and there is a beautiful ballet in the movie. Technically this black and white movie is perfect without any deficiencies. The characters are clad in stylish dresses, giving rise to new fashion trends.

On the flip side, the narrative loses its charm in the end after revelation of the suspense and the five minutes long lecture of Ashok Kumar on the irrelevance of the capital punishment bores. Anyway, this is not a big minus point because by then the movie is just about to end.

Around three and a half decades back, a session judge, Justice Saanwar Mal Agarwal had awarded capital punishment in a dowry-murder case and became quite famous due to this verdict. I had read his interview given to the popular Hindi magazine – Sarita in which he had referred to this movie (seen by him in his youth when he was studying law) and asserted that the difference between reel courts and real courts is even bigger than the difference in the reel life and the real life. He’s right. The high voltage drama shown in the court in this movie is impossible to be witnessed in real courts. We can ignore this unreal portrayal of courts by considering it as the liberty taken by the narrator for the sake of entertaining the audience, i.e., us.

Summing up, Kaanoon is an edge-of-the-seat classic suspense thriller as well as a gripping courtroom drama. No movie buff should miss it.

15 Responses to Discussing the capital punishment in a mystery