Thrill but no suspense

Posted on September 17, 2020 by Jitendra Mathur

Right Yaaa Wrong (2010) is a Hindi movie under the thriller genre. However it is not the routine run-of the-mill Bollywood suspense thriller. It is not an original story either. The filmmaker has lifted the story from a Hollywood movie – Above Suspicion (1995). All the same, he can be given the credit for Indianizing it proficiently and making a grossly watchable thriller for the Hindi movie audience. The director (Neeraj Pathak) has revealed the suspense just after the crime. Leave aside making it a whodunnit mystery, he has not even allowed it to remain a howdunnit mystery. Audience is well aware of who did it and how did it, much earlier than the climax of the movie. Nevertheless the movie is interesting and able to make the viewers sit on their seats till the last scene. 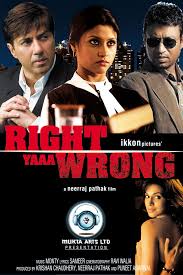 Sunny Deol plays the usual ideal (and superman like capable) cop who works in association with his colleague cum close friend – Irrfan. In between the initial action sequence of Sunny, the director starts unfolding the plot as if he is in a hurry. The infidelity of Sunny’s wife and the loose character of his cousin give a hint of the forthcoming storyline. However a paralyzed Sunny’s making a scheme for his backstabbers to implement which should result in his own death, confuses the viewers albeit for a very short while. This is the interval. Soon after the interval, the twist in the tale is very much within in the knowledge of the audience. Here the narrator demonstrates his commendable skill to maintain the interest of the viewer for the remaining part of the movie. Irrfan comes into active role, accusing his friend and colleague to mastermind a cold-blooded double murder and vows to get the guilty booked. Konkona Sen Sharma, his sister, enters the screen in the role of a sympathetic lawyer believing in the innocence of Sunny. Investigation, interrogation and trial scenes follow culminating in exoneration of Sunny and mental break-down of his dutiful friend, i.e., Irrfan who feels defeated and wounded with a painful sense of not being able to protect the honour of the law of the land.

The beauty of the narrative is that it fully justifies the title of the story. There are difficult moments in an otherwise straightforward and clean-heart person’s life too when he faces the moral dilemma of deciding what is right and what is wrong. Flowing with the events of the movie in the post-interval session, the viewer starts feeling that both the leading gentlemen are right in their own ways and none of them can be labelled as wrong.  Sunny’s making his enemies work upon the plan of their own murder, mistaking it to be the plan of Sunny’s murder, is simply breathtaking. And after the murder(s), the happenings and the developments in the story envelop the attention of the viewer in a different manner because the cat and mouse game between Irrfan (the cat) and Sunny (the mouse) is different from n number of such games shown in other movies. This cat and this mouse are emotional for each other and the bone of contention is only their individual perspectives of right and wrong and the storyteller has added spice to the already interesting tussle by bringing the cat’s sister – Konkona on the side of the mouse. Despite lack of mystery or suspense, the eagerness remains for the climax. However the climax, though not a let down, is not so impressive as it should have been after a sensational courtroom drama. 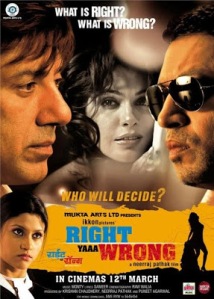 The director, instead of picking his script ditto from Above Suspicion, could have amended it a bit and kept the mystery (of at least the howdunnit aspect) alive till the climax thereby making it a genuine suspense thriller. Had he done it, the movie would have been a better one. All the same, I make no attempt to snatch the credit from him for making an entertaining thriller. The events related to the double murder reminisce me of Sanjeev Kumar starring thriller of 1986 – Qatl as well as another Sanjeev Kumar starrer of 1980 – Be Reham alongwith a relatively recent Bollywood thriller – Maharathi which was released in 2008 and of course Hollywood classic – A Perfect Murder (1998) with its Bollywood rip-offs like Humraaz (2002) and Vaada (2005). Yet it resembles them only in bits and pieces and overall it is able to carve out another, different niche for itself. 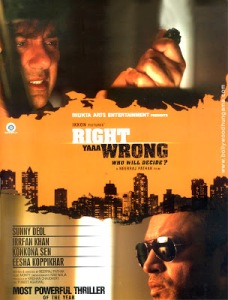 Right Yaaa Wrong (right or wrong) is a food for thought also. Can ethical values and laws of the land be considered as absolute in their own right or they need to be given a second look according to the tricky situation at hand demanding resolution ? Should an honest, sincere and loving person not be given a chance to judge them differently when life compels him to do an unethical thing or take the law into his own hands ? And how should a dutiful cop think ? Should he allow himself to get carried away by the noble and virtuous personality of the criminal or the etiology behind his crime and become a silent party to his crime by not performing his sacred duty of catching the law-breakers and presenting them before the court of law ? The answers are not easy.

The music of the movie is by no means excellent, however the very few songs inserted into the movie are well integrated with the narrative. The lead characters – Sunny, Irrfan, Konkona, Isha Koppikar as the unfaithful wife and the actor playing the backstabbing cousin; all have played their parts with utmost sincerity. Irrfan as always, is able to steal the show with his genius. Sunny has been given a chance to exercise his old and well-known action talent in the beginning part of the movie in which he has done well, making his action fans happy. But more importantly, he has done full justice to the real, meatier role of a cheated husband and a loving `n’ caring father in the later reels of the movie as well. Full marks to him. Deepal Shaw (lady police officer), Suhasini Mulay (magistrate) and Govind Namdeo (public prosecutor) are also first rate.

The technical departments of the movie are up to the mark. Editing has made the movie crisp and engrossing. Sunny’s wardrobe also needs a mention. The dresses selected for him give him a younger (though he was 53 years old at the time of this movie) and smarter look.

Overall a good movie. Doesn’t matter that it is a copied one.

9 Responses to Thrill but no suspense