If anybody asks me the name of my most favourite Bollywood actress of the bygone era, I will not take a fraction of a moment in replying – Saadhana. This gorgeous lady ruled Bollywood in the sixties through memorable movies like Arzoo (1965) and Mere Mehboob (1963). Highly talented director, Raj Khosla made a trilogy of mystery movies taking Saadhana in the lead role – 1. Woh Kaun Thi (1964), 2. Mera Saaya (1966) and Anita (1967). Whereas in the first and the third, Manoj Kumar was cast opposite her in the male lead, Sunil Dutt was cast as her hero in Mera Saaya. Since I have been a fan of Sunil Dutt too, this movie is a very big treat for me. I have seen it umpteen number of times. Reason ? Not just the lead pair and their amazing on-screen chemistry but the other aspects of the movie too – spellbinding suspense, mesmerizing music, engrossing courtroom drama, hilarious comedy, rain of romance, the works. This movie has something to offer to all kinds of movie buffs. It can undoubtedly be called a perfect entertainment spanning some 160 minutes. 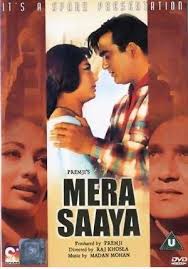 The story of Mera Saaya (my spirit) is based in the City of Lakes in Rajasthan, i.e., Udaipur. The story starts with the death of the wife, Geeta (Sadhana) of a renowned criminal lawyer, Thakur Rakesh Singh (Sunil Dutt) who becomes melancholous after parting with his beloved wife. However the real story takes off when police catches some dacoits and a woman with them who is the ditto of Geeta by her face and more importantly, she claims to be so. To refute her claim, Thakur Rakesh Singh cross-questions her in the court. At the same time, she also cross-questions him in order to prove that she only is his wife (she refuses to arrange any defense lawyer for her and decides to present her defense herself only). The interesting court-room drama finally culminates in herself first losing her case and then her mental balance, to be sent to asylum consequentially. However the mystery gets resolved through the ringleader of the dacoit gang in the ending scene of the movie. 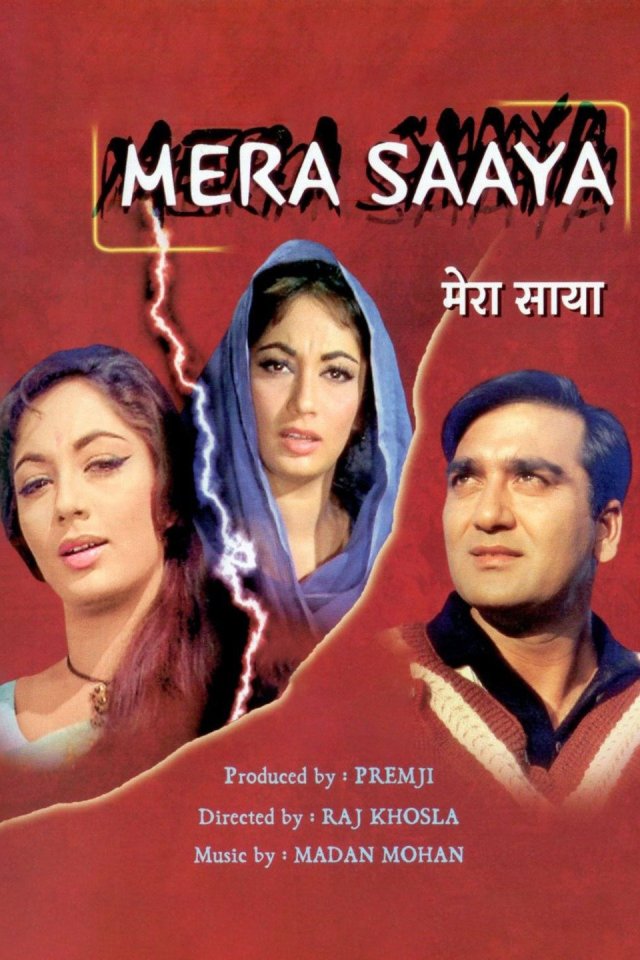 Mera Saaya has everything to recommend itself. There is not a single boring moment in the movie. This is unarguably the best directorial venture of Raj Khosla and the best ever acting performance of Saadhana. The narrative grips the viewer from the opening scene itself and does not loosen that grip till the very end of the movie. The courtroom drama is one of the best courtroom dramas portrayed in Bollywood movies. Dhumal and Mukri have provided enough laughs and relief moments in between the heated-up drama and intense emotions. The character of the maid, Kumud Bole and her activities add up to the intricate mystery. Alongwith the director, the screenplay-writer and the dialog-writer have also done their jobs pretty well. 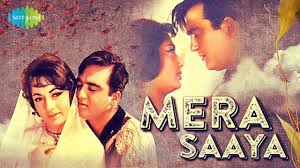 Madan Mohan has given the music of a lifetime in this movie with all the songs as immortal classics. Raja Mehdi Ali Khan has penned the beautiful lyrics for the songs. The movie has Lata’s timeless songs like Tu Jahaan Jahaan Chalega Mera Saaya Saath Hoga and Nainon Mein Badra Chhaye, Asha’s great item number – Jhumka Gira Re Bareilly Ke Bazar Mein and Rafi’s intense sad song – Aapke Pehlu Mein Aakar Ro Diye. One more song of Lata is there which is my favourite because of intermittent romantic dialogues and Sher-o-Shaayari of the lead pair – Nainon Wali Ne Haay Mera Dil Loota. The choreography of the songs is also laudable.

The way Saadhana has been my favourite actress, the same way Sunil Dutt has been my favourite actor over my life time. In fact, Saadhana had her best on-screen chemistry with Sunil Dutt only and this charming pair has lit up the screen with their marvellous interactions in the story, may they be in the courtroom or in their household or in the beautiful locales of Udaipur. The romance is lovely and the emotions are intense. The love of the husband (Sunil Dutt) and the wife (Saadhana) looks damn real and the viewers may wish that their real life love be like that only. The romantic teasing through dialogues interspersed with Sher-o-Shaayari as well as the gestures of Sunil Dutt and Saadhana in the song Nainon Waali Ne Haay Mera Dil Loota tickle the romantic hearts so much that it’s an experience to watch this song. The pain of losing the partner portrayed by both these artists is able to make the viewer empathise with them. Saadhana’s dancing performance on Asha’s song – Jhumka Gira Re Bareilly Ke Bazar Mein has made this dance number an unforgettable one. The supporting cast has rendered excellent support to this amazing pair which is all-pervasive in the movie. 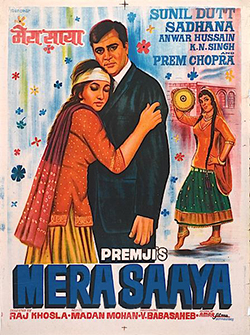 Mera Saaya is watchable for the scenic beauty of Udaipur also. Since I am a Rajasthani and I have resided too for more than one year in Udaipur, I can say that this world famous City of Lakes has never been shown more beautifully in any other movie. It’s a huge pleasure to see a lovely pair romancing in a romantically beautiful location. 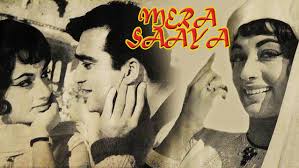 Normally a mystery movie does not bear repeat value because of the nullification of the suspense factor after the first watch. But Mera Saaya is a great exception. Despite the suspense being revealed upon you after the first watch, you can watch it umpteen number of times. And every watch will give you the same soothing, nice feeling in your heart. It can impartially be termed as ‘the perfect entertainment’.