I can relate to it in several ways

This review is my tribute to the extra-ordinary actor – Irrfan (Khan) who has passed away today. May his soul rest in peace.

I happened to watch Piku (2015), a much acclaimed movie,  a bit late but I was glad that I could watch it in theatre. Seeing it alone in a three-fourth empty theatre, I was able to get a feel of what was going on the screen in front of me and relate to the characters, their relationships and the events in several ways.

Piku is an emotional story (not comedy as I found as mentioned in many reviews) of a Bengali father and his motherless daughter. The father has chronic constipation problem and can quite justifiably be termed as a hypochondriac. His weird behaviour and mannerisms are irksome and irritating for his devoted daughter who can scream at him but cannot leave him. She also wants a normal life but is unwilling to get married because of the concern for her father. And her selfish father is quite content with that, repelling every man who makes advances to her with a supposed intent to finally marry her (the father doesn’t bother for the daughter’s casual affairs). He seldom realizes that he has made his daughter’s life hell and the daughter is also forgetting fast that she is also a human-being and has a right to live her life. She needs a break and that she gets in the form of a journey from Delhi to their ancestral house at Kolkata. The owner of the taxi hired by them has to become their chauffeur also for this long road journey. He himself is a troubled man at home with his nagging mother and sister making the day-to-day life hell for him. However being optimistic, sprightly and jolly by nature, he takes life in his stride and doesn’t allow himself to be bogged down by such things. And he only shows mirror to both the father and the daughter during his short-term association with them. The self-sacrificing daughter is Piku (Deepika Padukone), the selfish and irritant father is Bhaskor Banerjee (Amitabh Bachchan) and the happy-go-lucky taxi-owner having a never-say-die spirit is Raana Chaudhary (Irrfan). 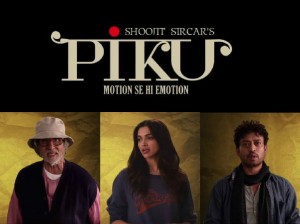 I have been suffering from regular constipation problem since my childhood and I still remember that when I was on an audit tour from Kolkata (then Calcutta) to the tea gardens in the Upper Assam region in the first quarter of 1989, this problem of myself had become a much-talked about subject there (I was ridiculed like anything). Thank God, now this bowl problem of myself does not trouble me so much on regular basis. All the same, I could relate to Bhaskor Banerjee’s character and wondered while watching the movie whether I also would trouble my family members in my old age in the same way. Well . . .

My mother who was a learned scholar of Hindi language plus a good singer and instrument player in her youth had got more and more troublesome in her advancing years. My father passed away in 2003 and since then my mother had been living with myself (or with my wife at her workplace when she was in a government job and posted at a place different from mine). She passed away on 23.01.2018. During the ending years of her life when I was living at Hyderabad, her problems had increased like anything which were physical for sure but more than that mental. Bhaskor Banerjee’s act of hiding salt-container reminded me of certain such things quite unknowingly done by her. In December 2014, she had a paralytic attack and since then we (myself, my wife and our children) used to take care of her almost the same way as Piku is shown to be taking care of Bhaskor Banjerjee in this movie. When Piku tells Raana that oldies have to be taken care of like kids and that’s to be done by their offspring only, I agree with her in toto.

The younger ones are always preached by the people and the books not to be selfish and take care of their parents and elders in the best possible way. Nothing wrong with that. But how often are the parents and the elders preached to respect the feelings, the sentiments and the needs of the younger generation ? When the preceding generation emotionally blackmails the succeeding generation to get the things done according to its desires and crushes the heart and the soul of the latter, the preachers vanish and the books become silent to it. Is it okay to extract the price of your love, care and efforts towards your children in the form of depriving them of their desired and deserved happiness ? Selfish love is no love in my opinion and emotional blackmailing is nothing short of a sin to me. I don’t know whether Bhaskor Banerjee could realize it or not in this movie because he is never shown to be introspecting. He is always shown to be imposing himself upon others especially his daughter. But !

But his selfishness and hypochondria also have a silver lining. He is concerned for his daughter and does not want her to get married to someone who is suffering from the same problem, i.e., constipation. By revealing this fact, the able filmmaker establishes that all’s not wrong with the self-centred father. 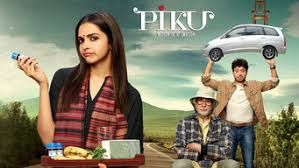 I feel that the way you behave in your old-age (most often unknowingly) is only a reflection of your real personality built over the long years of your life because personality is nothing but a cluster of habits and thoughts. Hence it’s better to take care of it when you are young with an active brain under your control. In the advanced years, your brain goes out of your control and you unknowingly portray yourself in the same way as you have been throughout your life. The same is the case of Bhaskor Banerjee. He must have been the same person during his young and not so old years (including the lifetime of Piku’s mother) as he is as an old man shown in the story.

I have found several moviemakers blowing the trumpet of their movies being original which they aren’t but Shoojit Sircar appears to be an exception. Despite my limited knowledge of the Indian and world cinema and literature, I firmly believe (because I feel like that) that Piku has an original story though it’s a one line story expanded to make a full-fledged movie. Writer Juhi Chaturvedi has penned a heart-touching and that’s why heart-winning screenplay and the low profile yet very talented director has brought it on celluloid with a high degree of proficiency. Partly it’s an in-house drama and partly it’s a road movie. There is no need to think much or expect much, the best thing for the spectator is to allow himself / herself to flow with the characters and become a silent member of their group. I did just like that and the result came to me in the form of such a satisfaction that I had experienced never before.

The filmmaker has quite sensibly abstained from showing Piku and Raana as having a romantic relationship in the end but he has shown that they have become good friends. Since Piku didn’t like Raana initially (knowing him as the owner of the agency sending taxi for her), hence it’s quite interesting to guess as to when she started liking him. Well, I could not spot that moment in the movie and this is the most natural thing in a male-female relationship especially when they are known to each other for quite some time. You can always recall the moment when you started disliking someone but cannot recall the moment when your liking for someone sprouted in your heart. And when this liking just happens over a period of time without a conscious awareness on the part of the individual, it’s bound to last long. And if it develops into a romantic relationship later on, that love is also likely to last for a lifetime.

The only thing that I found as not that natural in this movie is the free discussion about a girl’s sex-life. The heroine’s aunt (Moushumi Chatterjee) is inquiring about it like any other mundane day-to-day thing of life. Moreover the father is also aware of his daughter’s active sex-life (and quite unhesitating to tell it to the others). Perhaps I am too old-fashioned to admit that it’s quite normal in urban modern life.

Rest everything shown in the movie is quite natural. Every character appears to be a real flesh and blood human-being. The movie did not prove to be a laugh-riot for me as asserted by many reviewers. May be because hardships of life have snatched my sense of humour. But I was moved deep within at many places. The climax is tragic in the conventional sense but the movie does not end with the climax. The following scenes, i.e., the ending ones makes the viewer feel light, relaxed and optimistic instead of feeling sad. The heroine’s fuming at her father’s name’s incorrect spelling on the name plate (Bhaskar instead of Bhaskor because Bengalis pronounce words with an ‘o’ in between) and the final dialog between the heroine and the erstwhile maid of her home is the masterstroke of the filmmaker to end the movie on a high note.

Shoojit Sircar got noticed for his admirable works in the form of Vicky Donor (2012) and Madras Cafe (2013). However I have been his admirer since his very first venture – Yahaan (2005) which is a highly underrated movie in my view. He has shown his class once again here and proved that excellent work can be carried out and got noticed without publicity and noise also. This movie is a winner all the way from its first frame to its last frame.

Piku scores in all the departments right from cinematography to editing to background score. Anupam Roy has prepared melodious and impressive songs (with lyrics also being written by him only) which may not be chartbusters but render a soothing feeling to the ears of the listeners.

It’s a movie with a Bengali flavour. Though the story begins in Delhi and moves to Kolkata in the post-interval session only, nevertheless you find yourself in a Bengali environment throughout its duration. Not only the Bengalis, people from all the regions will relish this attribute of the movie. 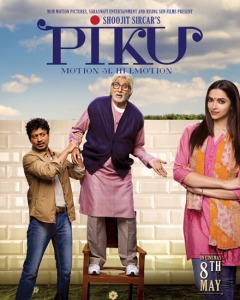 Deepika Padukone has excelled in the title role. Herself and the legend known as Amitabh Bachchan appear to have lived their roles instead of performing them. I rate Deepika’s performance as her best till then and AB’s performance as one of his best. The complete supporting cast has done a marvellous job. Every artist is perfect in the assigned role including the yesteryear’s beauty Moushumi Chatterjee and the class actor Raghuveer Yadav. However many different things shown in the movie take the shape of a story only when joined by an adhesive known as Irrfan. This outstanding actor has infused life into not only his own role but also every scene which features him.

During the two hours I spent in the theatre, I was lost in the story titled as Piku reminiscing various things of my past and present life, relating to various things shown on the screen and feeling as if I were with Piku, Bhaskor Banerjee, Raana Chaudhary and the other ones, observing and listening to them. What an experience it was ! What an experience it was friends !

14 Responses to I can relate to it in several ways