It shook the Indian political class in 1981

Now-a-days when any Indian movie portrays a corrupt and criminal politician, we’re not surprised because it’s routine. However this was not the case till the seventies when the Indian moviemakers considered politicians and cops as sacred cows whom no finger could dare to point at. Movies like Aandhi and Kissa Kursi Ka were banned during the internal emergency in India. Emotional drama Aandhi showed the mud-slinging character of the Indian politicians whereas Kissa Kursi Ka, a satire, mocked the Indian politicians and the functioning of the system in India in general. However these movies did not show politicians as criminals or shaking hands with the criminals. 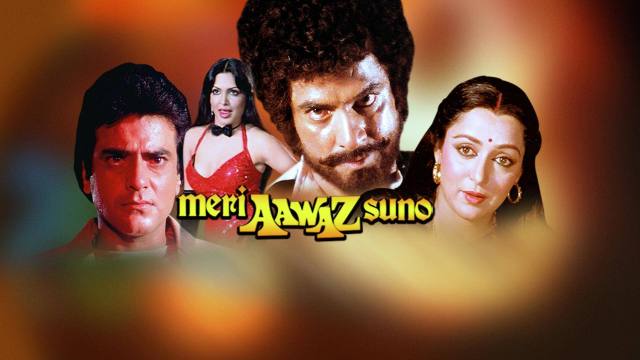 Breaking the path in the early eighties, Padmalaya Films presented a movie, directed by S.V. Rajendra Singh (popularly known as ‘Singh Babu’ in Kannada cinema), starring big names like Jeetendra, Hema Malini and Parveen Babi. This movie was Meri Aawaz Suno (1981). This movie is actually the Hindi remake of Sinbh Babu’s Kannada movie – Antha (1981) only with Ambareesh playing the lead role. It showed the might of the baddies in India getting strength from the high-profile politicians and cops on perennial basis. And that’s why when an honest cop tries to expose and book the criminals; the system, instead of supporting him, goes against himself only. The hero finds in the ending scene that all his efforts and sacrifices (physical torture and loss of his own family members) have gone in vain and the system is going to punish him only (and not the criminals). Thus Meri Aawaaz Suno also underscored this fact that in India, the roots of corruption are so deep and strong that good loses to evil and truth loses to untruth. 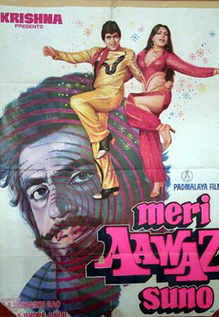 The makers of Meri Aawaaz Suno were so scared of the Indian law-makers and law-enforcers that they pronounced the disclaimer loud and clear through a voice from the background in the beginning scene – ‘Our story belongs to a fictitious country named as Mundustan (not Hindustan)’. Despite this very big (and repeated) disclaimer, the movie generated a big controversy as the Indian cops and politicians found it as a mirror for themselves, showing their real faces. Though this controversy and opposition helped the movie in becoming commercially successful, perhaps thereafter only the tradition of showing a disclaimer on the screen prior to the start of the movie (All the characters of this movie are fictitious and any resemblance to anyone living or dead is purely coincidental) started in the Indian movies.

Meri Aawaaz Suno (listen to my voice), is the story of an honest cop, Sushil Kumar (Jeetendra) whose sister had been abducted by the human-traders through a deceitful marriage. His senior officer (Om Shivpuri) finds that his face is similar to an imprisoned hardcore criminal – Kannwarlaal. To encash this coincidence, Sushil is sent on a mission to enter the criminals’ gang as Kannwarlaal, collect evidences against them and ensure their arrest on the basis of those evidences. Doing his duty diligently and with utmost sincerety, Sushil swallows his own tears upon his sister’s committing suicide in front of his eyes and his mother’s final rites taking place without his involvement. One evening, he is stunned to see the police commissioner and high-profile politicians participating in the gangsters’ party. He takes their photographs too showing their involvement in the illegal practices of the baddies.

However the twist in the tale comes when Sushil arranges the arrest of a significant member of the gang, Aazaad (Shakti Kapoor) but his own senior officer arranges Aazaad’s release under the pretext of  ‘pressure from above’. Aazaad exposes Sushil before the gangsters (Kader Khan, Ranjeet etc.). Becoming aware of the fact that he has collected evidences against them, they inflict inhuman torture on him (uprooting nails etc.) and also kill his pregnant wife, Sunita (Hema Malini) with her unborn child in front of him. With the help of the gangsters’ moll (Parveen Babi), he finally escapes first and then carries the baddies directly to the court to hand them over to the law alongwith the evidences against them. But to his painful disbelief, he finds that the law is having shackles for him, not the culprits. The goddess of justice is taking the side of the law-breakers and not him, the law-protector. 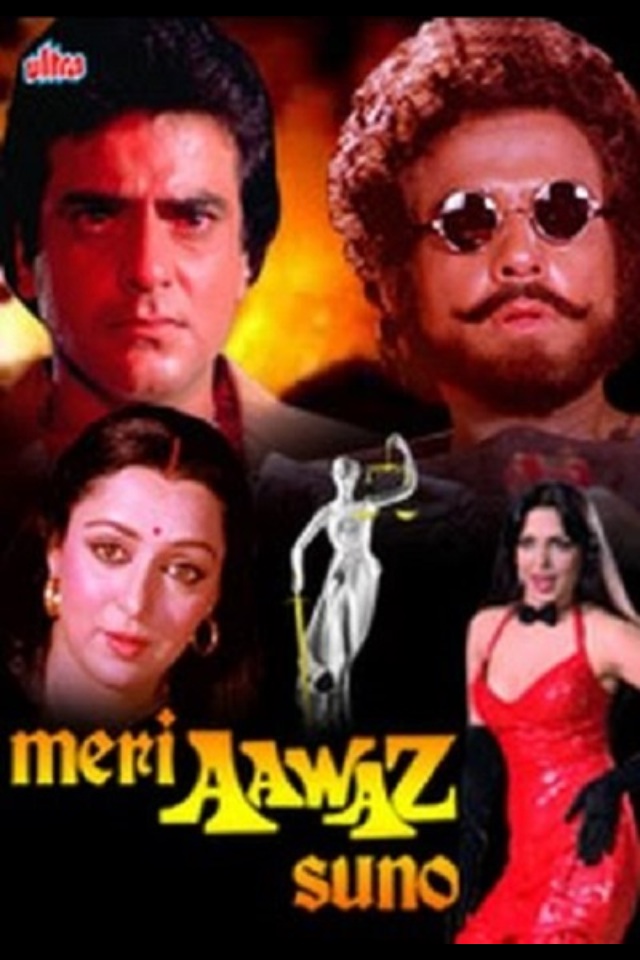 Meri Aawaaz Suno seems to have been made with a lot of caution because of the fear of the mighty law-makers and law-enforcers in the minds of the people behind the movie. Still it shook the Indian political class as well as the heavyweights of the Indian police with its release and a demand emerged to ban it (or at least suitably edit it). This controversy not only helped this above average movie to be commercially successful but made it a path-breaking one also because thereafter portrayal of politicians and cops as corrupt and criminalized became a trend during the eighties and the nineties. Anyway, no such movie proved to be so close to heart as Meri Aawaaz Suno. 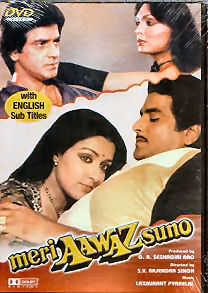 The action sequences of the movie are very good. Laxmikant Pyarelaal’s music is good, containing songs like – Achchha Hua Tum Mil Gaye, Gudiya Re Gudiya Tu Batla and Mehmaano Ko Salaam Hai Mera. Technically the movie is up to the mark. 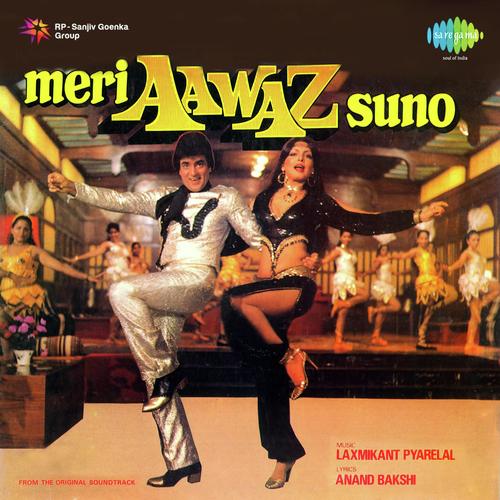 Very few movies utilized the acting talent of Jeetendra in the real sense and Meri Aawaaz Suno is one of them. Despite caricature like portrayal of the baddies and overdramatic effect in sequences, Jeetendra stands out as giving one of the best performances of his career in a role packed with both action and emotion. Leading ladies – Hema Malini and Parveen Babi could not get much footage. Supporting cast alongwith the villains have performed according to the respective roles assigned to them. 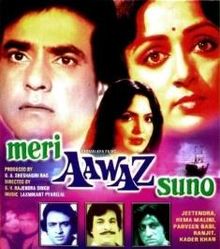 After the movie is over, the final words (emerging from the background in the ending scene) keep on echoing in the mind of the viewer – Kanoon Majboor Hai, Iski Aawaaz Ab Kaun Sunega ? Iska Faisla Ab Aap Keejiye (The law is helpless, now who will listen to his voice ? You decide it now).

4 Responses to It shook the Indian political class in 1981