The day of victory of love and devotion

The Indian mythology tells the story that Lord Shiva had married Sati whose father, Daksha was not happy with that marriage. Once Sati visited her parental house against the will of her husband on the occasion of a Yajna performed by her father and her father said humiliating things for Lord Shiva, her husband. Grief-stricken Sati laid down her life then and there. Now Lord Shiva was grief-stricken and angry upon losing his loving wife. After his terrifying Taandava dance and spoilage of the Yajna of Daksha by his followers, he was calmed down only when Lord Vishnu cut the dead body of Sati into 51 pieces through his Sudarshan Chakra which got scattered in various regions (every limb is worshipped at the particular place) and thereafter Lord Shiva went for hard penance. 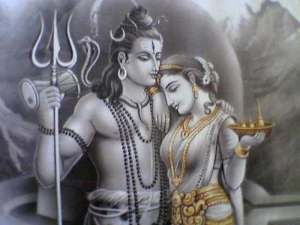 When Lord Shiva was undergoing his penance in a state of trance, two different phenomena took place. On one hand, a deadly demon called Taarakasur came into existence who created havoc in the world and on the other, Sati was reborn as Parvati, being the daughter of Himalaya. Taarakasur had got a boon that none could kill him but for the son of Lord Shiva. Here Parvati was led to believe by destiny that she was born to be the wife of Lord Shiva only. She left her home and started her own penance at a desolated place in the Himalayas to get Lord Shiva as her husband. Now her marriage with Lord Shiva could serve both the purposes – herself getting him as her husband as well as their union leading to the birth of their son who could kill Taarakasur. Hence the gods also helped her by breaking the penance of Lord Shiva through the arrow of Kaamdev (Cupid) and creating love in his heart for her. Kaamdev got burnt to ashes through the fire that came from the third eye of Lord Shiva but as Lord Shiva is called Aashutosh (one who quickly gets angry but becomes pleased even more quickly, leaving his anger behind), he gave life again to Kaamdev and thereafter approached Parvati to test the depth of her love for himself. He approached her in the disguise of a sage and criticized himself before her. When she was about to curse him out of her anger (that emerged by listening to the criticism of the lord of her heart), he revealed his true form to her immense delight. They got married and their union led to the birth of Lord Kaartikeya (or Kumaraswamy or Shadaanan) who killed Taarakasur.

Well, whether we, the educated ones, believe this mythological tale or not, is up to us only. However it underscores the fact that Indian mythology has always kept true love in high esteem. True love of a male for a female or a female for a male was considered pious. Our Shaastras or the sacred books have given due importance to Kaama or sex also because after following Dharma (good conduct), Artha (earning for earthly purposes) and Kaama (sex for generation of new babies and continuation of the Srishti or the world) only, one is entitled for Moksha or the salvation. Further, out of the four Aashramas or the stages of life, the Grihasthashrama or the householder’s life has been given the utmost importance in our Shaastras. Sex in marital life should not be just for the sake of lust or physical satisfaction, there should be a purpose behind it. Hence this tale has its own importance. It’s the day of victory of true love of Lady Parvati. We can substitute the word ‘love’ by another word ‘devotion’ too. Mahashivaraatri is the day of triumph of love and devotion – devotion to someone, devotion to some great objective, devotion to the Lord who can never leave the heart of a true devotee.

2 Responses to The day of victory of love and devotion