Portrayal of a lover’s pain

Great Hindi poet – Sumitra Nandan Pant’s immortal lines are – Viyogi Hoga Pahla Kavi, Aah Se Upaja Hoga Gaan, Nikalkar Aankhon Se Chupchaap Bahi Hogi Kavita Anjaan (the first poet of the world must have been some lover separated from his beloved, his sigh must have given rise to the lyric and the hitherto unknown poetry must have flown through his eyes, i.e., in the form of his tears). Yes, it’s the pain of separation from or loss of his / her beloved that gives rise to the immortal poems and songs emerging straight from the wounded heart. Painting is another form of fine art that can portray such pain vividly through beautiful and heart-touching pictures. Today I am reviewing a unique book in which poetry and painting amalgamate to portray a loving husband’s pain who has been separated from his wife.

Meghdootam is the famous Khand-Kaavya (a long narrative poem) authored by the great Sanskrit poet of our country – Mahakavi Kaalidaas. It tells the emotional story of a Yaksha (a divine male entity) who was in the service of King Kuber who ruled Alkapuri (a place somewhere near Mount Kailash). The Yaksha was just so much in love with his wife that he could not do justice to his duty. Coming to know of his negligence, King Kuber awarded him the unbearable punishment of staying away from his loving wife for a year and he had to move to the mountain of Ramgiri. Now the Yaksha is forced to live away from his wife whose love only has been his obsession. He passes his time, shedding tears and missing his wife. When the rainy season (the month of Aashaadh as per the Indian calendar) arrives, his pain of separation from his beloved crosses all the bounds. In such a situation, he chooses a cloud in the sky as his messenger and requests him to deliver his love-soaked message to his wife who is equally aggrieved by this separation. This message only is the essence of Meghdootam or Meghdoot (cloud, the messenger).

The legendary poet has divided this great Kaavya into two parts – Poorva Megh and Uttar Megh, Poorva (former) Megh narrates the path from the Ramgiri mountain to Alkapuri. Uttar (later) Megh spells out the geography of Alkapuri, the grief and the plight of the Yaksha’s wife (her name being Shyama) and finally, the message to be delivered by the cloud to that bereft lady. Mahakavi Kaalidaas who is known as the Shakespeare of India, has presented an immensely beautiful as well as sentimental account of this immortal saga which has been stirring the loving hearts for ages.

Kanhaiya Lal Varma is a well-known name in the world of painting. He opted for the Rajasthani style of painting smelling with the fragrance of the Rajasthani soil and went on to make hundreds of classic paintings in that style, using the immortal folk-tales and inspiring sagas as their subject-matter. He made a series of paintings based on this immortal Kaavya and any art-lover will admit after seeing those paintings that like the Kaavya, these paintings are also immortal and priceless. 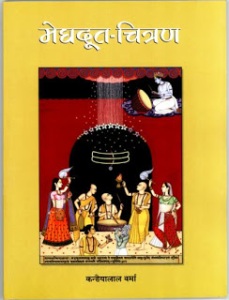 Meghdhoot-Chitran (the portrayal of Meghdoot) is a book in which these paintings are given with suitable narration for all them. Total no. of paintings is 34 (19 based on Poorva Megh and 15 based on Uttar Megh). The layout of the book is such that the left side page contains the details of the painting, containing first the original Sanskrit Shloka (couplet), then the Hindi narration and thereafter the English translation of the same whereas the right side page contains the painting.

Every painting is eye-cooling and full of aestheticism. However Kanhaiya Lal Varma who has always worshipped beauty and purity of love only through his art, has penned highly aesthetic narration too for every painting. The concerned Shloka authored by Kaalidaas is written (by Varma himself) at the bottom of the painting (in some paintings, it is given at the top though). It’s the specialty of Varma that despite narrating the beauty of the ladies and referring to lovemaking in a couple of paintings, nowhere is any lack of decency either in the painting or in the narration. Varma’s painting-brush and his pen, both seem to be well-acquainted with the line demarcating aesthetics from obscenity. His narration is also wonderful. His words seem to be beautiful and fragrant flowers strung in the garlands of sentences. The English version of the Hindi narration has been written by Roop Narayan Kabra which is helpful for those who are not aware of Hindi and Sanskrit.

Before presenting his paintings, Varma has written the preface in Hindi (its English version is also given) asserting the background of this series of paintings and his own experience and perception of the Kaavya as well as the beautiful places which are an integral part of it. The author’s assertion appears to be completely honest and sincere as the reader moves through the words. Varma says that he has used the specially prepared paper of Vasli and used the fresh rain-water (fallen directly from the clouds) for dissolving the (indigenous) colours used to make these paintings. The preface leads the reader of the book and watcher of the painting into the heart of the painter-cum-author and feel his aesthetic sense and emotional nature.

The original paintings are, but natural, big but they can be seen and studied with ease in their smaller form available on the pages of this book. It is a river of separation-generated feelings, a river of beauty scattered in the paintings made in the traditional style, a river of art. These paintings are not just for the eyes, they are for the heart; a heart which can feel the sentiments inherent and which can empathize with the characters of Meghdoot – the Yaksha and his wife. Varma’s explanation of every Shloka clarifies that the message-sending Yaksha is not just conveying his message but also pouring out the pain in his heart. How touching it is, can be known by seeing the paintings and reading the narration only. The way the Yaksha elaborates the dos and don’ts to the cloud while visiting the different places on its way is heart-conquering for the reader.

Love and pain are two sides of the same coin. The more you love someone, the more is the pain of his / her separation. Meghdoot underscores this fact only. The knowledge of the divine language, Sanskrit is not much among the Indians and its stretch is getting further constricted with the passage of time. In such a scenario, every lover of literature may not be able to read the original Kaavya of the great poet Kaalidaas. (Late) Kanhaiya Lal Varma, an art-teacher who had got the National Teacher Award from the president of India in 2000, presents a handy solution to this issue through Meghdoot-Chitran. This book is a unique combination of art and literature, an invaluable gift for the art-lovers as well as the literature-lovers.

4 Responses to Portrayal of a lover’s pain