The Kakori Conspiracy : The Light-House of Indian Secular Patriotism

The Kakori Conspiracy is a golden chapter of the Indian freedom struggle in which the violent revolutionaries led by the great patriot – Chandra Shekhar Aazaad looted the govt. treasury at a place called Kakori (about 14 miles from Lucknow) in the night of 9th August, 1925. It cannot be a small coincidence that the flag-bearer of Gandhi-led congress party decided to start its Quit India Movement on 9th August itself in 1942. The revolutionaries had done so because to carry out their nationalist activities, they needed money and they did not want to harass their own countrymen for that. Hence they decided to loot the British govt. itself which had been looting this great nation for more than one and a half centuries.

All the revolutionaries involved in the Kakori Conspiracy were well-educated ones. And their joint action was a symbol of India’s secular tradition too because Pandit Ram Prasad Bismil and Ashfaqullah Khan rubbed their shoulders to take on the mighty British for the cause of the motherland. The issue of who was a Hindu and who was a Muslim was not important for them. They were Indians first and to liberate Mother India from the shackles of slavery was the only mission before them which was above all the differences including the religion.

The revolutionaries, despite their violent path, were so human that they did not kill a known Railway employee who stumbled upon them when they were carrying out their plan. He had promised them to tell nothing to the police but he did exactly the same under the greed of reward. On his information only, the revolutionaries were caught later (except the mastermind, i.e., Chandra Shekhar Aazaad). A completely biased trial took place and quite unjustly, four principal revolutionaries were sentenced to death which was bitterly condemned far and wide. But the proud sons of Mother India embraced the noose with a smile on their faces.

It was the secular nationalism and patriotism of dependent India in which there was no place for communalism. The selfish people whose activities led to the partition of this great nation and the inhuman atrocities and elimination forced on millions of innocents, cannot match even the particles of the dust released by the foot-steps of these great martyrs. History never forgave them and will not forgive them in the coming times for the unpardonable sin called the partition of India. 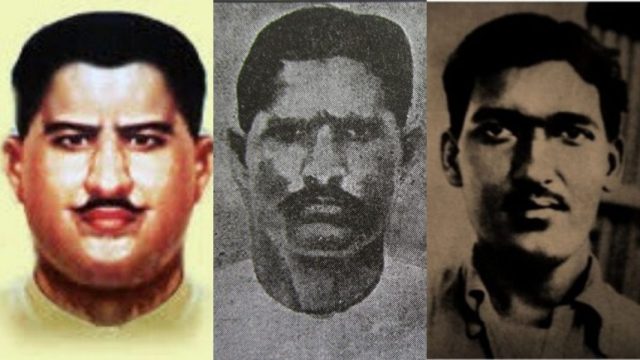 I pay my tribute to these great youths (all were in their twenties only) who did not care for even their lives to repay the obligation of the motherland on them. If only the communal-minded people could learn something from them. I end this post with the lines of Ram Prasad Bismil (he was a great poet who had written the song – Sarfaroshi Ki Tamanna) that he had penned before his execution – Marte Bismil Roshan Lahiri Ashfaq Atyachaar Se, Honge Paida Saikadon Inke Rudhir Ki Dhaar Se (Bismil, Roshan, Lahiri and Ashfaq lose their lives due to oppression but the stream of their blood will produce hundreds like them).

10 Responses to The Kakori Conspiracy : The Light-House of Indian Secular Patriotism