The true meaning of love and togetherness

Posted on September 24, 2019 by Jitendra Mathur

Saath Saath (1982) is one of those outstanding movies of Bollywood which did not get their due. I feel sorry for this movie and the people associated with it when I read accolades for average but overhyped movies. Saath Saath had got average box office success, neither a flop, nor a big hit. It had received admiration too but not the way, any 3 Idiots or My Name is Khan receives. The fact is, Saath Saath is simply an outstanding movie with several pluses to its credit – story, treatment, crispness of narration, performances and music. It provides entertainment, romance, laughs, thoughts to ponder and inspiration; all rolled into one. A gem of a movie by the director Raman Kumar. 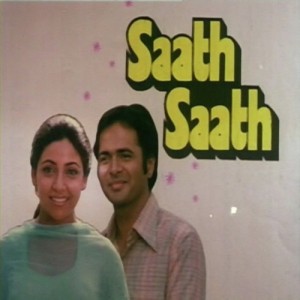 Saath Saath got released in 1982 with the charming next door pair of Farooq Sheikh and Deepti Naval and the timeless ghazals and nazms penned by Javed Akhtar, composed by Kuldeep Singh and sung by Jagjit Singh and Chitra Singh. Despite its average commercial success, it proved to be a heart-conqueror for the common Indianfolk and acquired the tag of a classic with the passage of time. 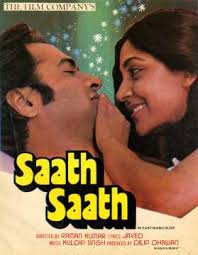 The story of Saath Saath portrays how the might of money and hardships of life get the better of the ideals of an idealistic person. However a girl loving not just him but his ideals is not ready to compromise on this count for the sake of love, family or anything. When she is about to leave him, then he realises how he had digressed from his right path, his ideals. And he stops his wrong steps getting the Saath or the state of togetherness with his sweetheart in return. The punchline of the movie comes in the end – Love does not mean looking at each other, it means looking together in the same direction. This punchline sums up the plot of the story and the intention of the storyteller. 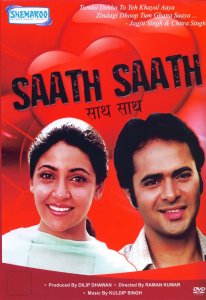 The story starts with the college life love of Farooq and Deepti in which there are teasing and light moments provided by their buddies. After their love marriage, starts their hard life in which they hardly get any time to see each other, leave aside talking. All this has been portrayed in a highly emotional, natural and lovable manner. Family responsibilities and circumstances lead Farooq to work in association with Satish Shah, a corrupt publisher whose thoughts centre around enhancement of cash inflow, by whatever means possible. Deepti who had married Farooq for the sake of his ideals only because his idealism was the foundation stone of her love towards him, is dumbfound to see the undesirable change in her husband and lover, courtesy the job and the company of Satish Shah. Farooq is getting more and more transformed from an idealist to a money-minded person, looking a pale shadow of his college days, resulting into the anguish and frustration of Deepti for whom the value of the ideals is still undiluted. Finally Farooq’s decision to get involved in publication of pornography proves the proverbial last straw on the camel’s back for Deepti. She decides to leave him and his home and then only the curtain fallen on the eyes of Farooq gets lifted and he is able to see how he has gone astray from his real and original path. 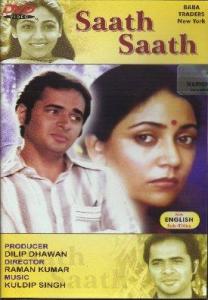 The story and its narration both are heart-touching. The transformation of Farooq from a man of principles and ideals to a selfish and money-minded person has been shown quite realistically. It has reminded me of a legendary Hindi novel – Jhootha-Sach written by Yashpal which shows similar transformation of a patriotic and idealist freedom-fighter in the wake of the changed scenario post independence. Farooq who says a SHER in the beginning – ‘MAANA KI PARESHAAN HOON, LAACHAAR NAHIN HOON; INSAAN HOON, BIKNE KO MAIN TAIYAAR NAHIN HOON’ (Though I am hard-pressed, yet not compelled to follow the wrong path, I am a human-being who is not ready to be sold for money), becomes more and more money-minded later on, giving hollow justifications to Deepti for his wrongdoings, looks utterly real. In the ending scene when Farooq conveys Deepti his decision to leave the wrong path and join his role model, A.K. Hangal’s newspaper, Deepti asks him whether he is doing it just for her sake; Farooq’s reply simply touches the heart of the viewer – ‘NAHIN, APNE LIYE BHI AUR UN SACHCHAIYON KE LIYE BHI JINHEN HAM DONO NE MILKAR PYAR KIYA THA’ (not just for your sake, for own sake also and also for the sake of those truths we had loved together). 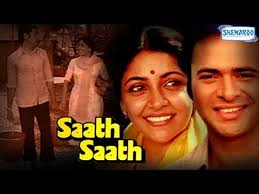 The greatness of the music of this movie is timeless with gems like Tumko Dekha To Ye Khayaal Aaya, Ye Tera Ghar Ye Mera Ghar, Kyun Zindagi Ki Raah Mein Majboor Ho Gaye and Pyar Mujhse Jo Kiya Tumne To Kya Paaogi. The lead pair of Farooq and Deepti have delivered marvellous performances with amazing on-screen chemistry between them and they have been ably supported by the complete supporting cast. Art direction and background score are perfect and good editing has kept the movie crisp and engrossing. A perfect movie by all standards with everything just falling in line. 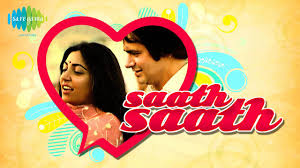 Saath Saath reminds you that when you love somebody, it is not just physical love or the love for the outer persona, the true love happens for the character, thoughts and inner nature of that person. That love remains intact only when both the lovers continue to look together in the same direction. Ultimately that togetherness only matters in their relationship and not the physical togetherness. I strongly recommend Saath Saath to all those who are fond of watching good, meaningful and inspiring movies and have not watched this masterpiece yet.

11 Responses to The true meaning of love and togetherness