Let there be one more sin

Several crime-based movies have been made in Bollywood seeking inspiration from the noir cinema of Hollywood that had taken shape during the forties and fifties. Most of such movies have been just run-of-the-mill formula-based flicks. However some of them stand out due to deliberate efforts of the moviemakers or by default. Every such good movie has not received praise and recognition and we have underrated movies whose positive qualities went overlooked by the critics as well as the audience. Ek Gunah Aur Sahi (1980) is such an underrated movie only which had badly flopped on the box office when released.

Ek Gunaah Aur Sahi (let there be one more sin) is the story of Shankar (Sunil Dutt) who has been a bank robber but after falling in love with Paaro (Parveen Babi) and marrying her, is willing to live the life of a straight citizen. However his marital bliss is marred by his arrest on the very first conjugal night of himself and Paaro. In jail, he gets recommended time and again for early release due to his good behaviour as a jailbird and a clearly demonstrated intent to live a straight life post his sentence but every time, a bank manager, Varma (Madan Puri) who is a member of the committee authorized to take such a decision, blocks his release. Varma is a corrupt person and a white-collared criminal who wants Shankar to rob his bank so that he gets an opportunity to hide his own embezzlement under the cover of that robbery. He strikes a deal with Shankar that he will get him out of the jail (earlier than completion of his sentence) and in return, Shankar will rob the bank for him. Shankar’s wife, Paaro is against this deal and she wants her husband to complete his due sentence and not to enter the crime-world again just for the small gain of getting an early release from the jail but Shankar is so restless to get reunited with his loving wife that he accepts Varma’s offer. Varma is not only a corrupt person but also licentious by character. When Paaro visits him to deliver Shankar’s message (that Varma’s offer is acceptable to him), he intoxicates her by deceit and rapes her in that state of hers. With a hurt body and soul, Paaro absorbs her pain within herself and does not tell this fact to Shankar when he gets release from the jail and comes back to her. However she insists that Shankar won’t go for robbery alone and she will be with him during that act.

Shankar successfully robs the bank with the help of Paaro and a confidant of Varma. And then only he comes to know of the real intent of Varma behind the execution of this robbery. Varma is such a sadist that now he is about to tell Shankar that he had raped Paaro but Paaro shoots him before he could speak it out to Shankar. Now Shankar and Paaro find the police chasing them (knowing that they only have robbed the bank). During this endless and aimless run from the police only, Paaro happens to reveal the fact of her rape by Varma to her husband. Badly hurt and aggrieved Shankar is not able to understand as to what to do now and where the destiny is going to land them. The final twist in the story takes it to an utterly Bollywoodish finale.

Ek Gunaah Aur Sahi is an interesting crime-thriller which was perhaps ahead of its time when made, considering the taste of the Indian audience in that period. It is studded with regular Bollywood formulae and I am not terming it as a highly admirable flick because there is no dearth of potholes and deficiencies in the script and the treatment. However, by default perhaps, it has got its moments too, taking it beyond the ordinary. This long forgotten movie has some unforgettable scenes. The part which depicts Shankar and Paaro on the run (from the police) is the best part of the movie which contains not only thrill but a good deal of emotions too. The confused husband-wife duo for whom the robbery was only a means to live together peacefully thereafter, finds that everything is messed-up for it and expecting things like peace and comfort in life are just like asking for the moon now. When Shankar asks Paaro why she shot Varma and Paaro is not able to answer, the mental state of both of them is something that is better to watch on the screen instead of knowing through my description. When their chase for getting away and away from the police is going on, either they don’t have any time to think and when they do have, there is nothing nice to think or cherish. Only the shadows of the bygone bad-taste-giving events are there to haunt them (and hurt them). This psychological and emotional aspect of the story has been dealt with very well in the movie. 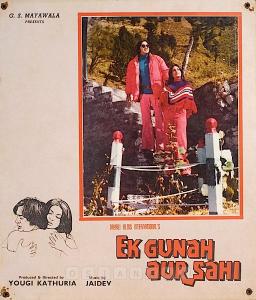 Sunil Dutt was a good actor and he has done justice to the lead role. Madan Puri and others are routine. However it’s Parveen Babi who startles the spectator with her terrific performance. Today (4th April) is her birthday. I feel, Bollywood did not do justice to this natural actress by labelling her as a glamour doll. She has shown her mettle in many movies and Ek Gunaah Aur Sahi is her such a forgotten movie that it’s painful to find that nobody recalls her performance in that. She has portrayed with finesse the pain and anguish of a wife whose loving husband gets arrested on the wedding night itself and she waits endlessly for him to return and resume the conjugal life with her. But she wants to wait for him instead of his getting an early release in return for doing one more crime. And when her virginity (despite being a married woman) is crushed by a baddie by deceit, there is no end to her sorrow. Such a thing has happened with her that she finds herself as unable to reveal to her husband who is just too happy to get reunited with her. Such an intense role would have suited an actress like Shabana Azmi or Smita Patil but it’s Parveen who has done it with no less proficiency. The scene in which Shankar adorns Paaro like a bride himself after getting released from the jail and makes love to her, her portrayal of the stuffiness and grief of Paaro is just superb. That scene can be considered as one of the most underrated scenes of Hindi cinema with Parveen’s acting in that as a classic example of underrated performance.

Technically the movie is okay and the production value is modest. Colours of the scenes have faded with time. However the cinematographer has done his job well being in sync with the sentiment prevailing in the scenes. The movie is compact and there is no dragging of the story at any place. The story moves straight towards its culmination right from the very first scene without any digression in between.

Music of this movie is another classic example of forgotten good music. Two songs are real gems lyric wise as well as composition wise -1. Yahi Hai Tamanna Yahi Hai Iraada (Asha Bhonsle) and 2. Raat Aati Hai To Har Dard Chamak Uthata Hai (Bhupinder) which is the title track. The lyrics have been penned by none other than the legendary Shaayar – Janaab Jaanisaar Akhtar (the father of Javed Akhtar and the grandfather of Farhan Akhtar) and they have been composed by a great music director, Jaidev.

Summing up, Ek Gunaah Aur Sahi is an intense crime-based drama with a dark narrative and sans any relief moments. When released in 1980, it not only bombed on the box office but also got torn apart like anything by the movie-critics. However after watching it, I can say that despite deficiencies, this movie certainly has its moments and it’s not justified on the part of the critics to brush it aside without giving credit for anything. I acknowledge that it’s not an excellent movie. Nor is it for all types of audience. It’s meant only for those who like to watch some intense drama on the screen. Now the times have changed and a sizable audience is there in our country for such type of movies also. Hence if some skilled filmmaker decides to remake it, he may succeed in presenting a refined and highly impressive sentimental crime-thriller to the viewers.

6 Responses to Let there be one more sin