Munshi Premchand has been the most respected one among the Hindi fiction writers for over a century. The legendary writer was an idealist in his initial writing days and gradually only he moved towards realism in his creations. One of his idealistic stories is Panch Parmeshwar (arbitrator as God). Though this story sounds unrealistic in contemporary scenario, still it is considered a classic idealistic story. I had seen a black and white movie – Panchayat (1958) starring Raaj Kumar, Pandhri Baai, Manoj Kumar, Jabeen Jaleel, Shyama, Nazir Hussain, Kanhaiyalal etc. which was an adaptation of this story. However I am reviewing a coloured movie made by the prestigious Rajshri banner of Bollywood whose story is also on the same lines.

Saanch Ko Aanch Nahin (truth has no fear) was released in 1979. It starred Arun Govil as a full-fledged hero for the first time and cast a newcomer girl Madhu Kapoor opposite him. However since the story is an adaptation of Panch Parmeshwar, the hero-heroine are actually there to romance and sing songs only whereas the plot of the movie belongs to their fathers in the movie.

Manoharlal (Om Shivpuri) is a shrewd businessman who makes his friend Satyaprakash (Arvind Deshpande) the arbitrator from his side in a dispute with Hariram (Gajanan Jaagirdar) and to further strengthen his case, he enters into a matrimonial alliance with Satyaprakash, engaging his daughter Nirmala (Madhu Kapoor) with Satyaprakash’s son Ajay (Arun Govil). The newly engaged couple soon falls deeply in each other’s love and eagerly awaits the marriage ceremony. The twist in the tale comes when in the proceedings of the arbitration, Satyaprakash favours the truth and gives his judgment against Manoharlal. Infuriated Manoharlal breaks the engagement of their children without realising the fact that now the erstwhile engaged boy and girl are so deep in each other’s love that they cannot bear the separation. They keep on meeting each other now clandestinely. However when Manoharlal tries to marry Nirmala to some other boy, she runs away from home with Ajay but having come to know of her mother’s serious illness, comes back.

The climax comes when in another arbitration involving Satyaprakash, Manoharlal becomes the arbitrator. First he thinks of settling his score with Satyaprakash by giving a wrong judgment against him. However after sitting on the judgment chair, he finds himself unable to do injustice and gives the just and correct verdict in Satyaprakash’s favour. By his own deed he realizes now his error of misunderstanding Satyaprakash and paves the way for the reunion of the lovers. 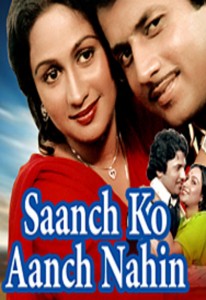 Since the moviemakers have borrowed the plot from the classic story, they could not do much to prepare a screenplay from their side. The thin storyline had to be stretched to make a full-fledged feature film of over two hours. So the romantic teasing and meetings of the young couple and other family members take place alongwith the songs. In the first half, it appears okay and the viewer enjoys the proceedings. The trouble comes in the second half when after the split in the families, the writer finds it difficult to fill the time till the climax arrives. Hence the episodes of the couple’s clandestine meetings and running away from homes etc. have been inserted which are not very impressive and clearly appear to have been imposed upon the main story to fill the time duration.

However the movie has been made according to the long standing Rajshri tradition with a simple backdrop, family values, ear-soothing music and lovable characters (except the negative ones). The first half of the movie is a pleasure to watch and but for the dragging already mentioned, the second half is also not that bad. It’s a lovely movie and like almost all the Rajshri movies in that era, the viewer starts wishing to have such people only in his / her family too. The romantic encounters of the young couple are rib- tickling as well as heart-tickling. Overall it’s an entertaining movie for sure and comes true to the expectations of the audience of the Rajshri movies.

The performances are good. Arun Govil with his boyish looks has performed pretty well in the first lead role of his life and the newcomer girl Madhu Kapoor has developed good on-screen chemistry with him. The complete supporting cast has done justice to the respective roles assigned. 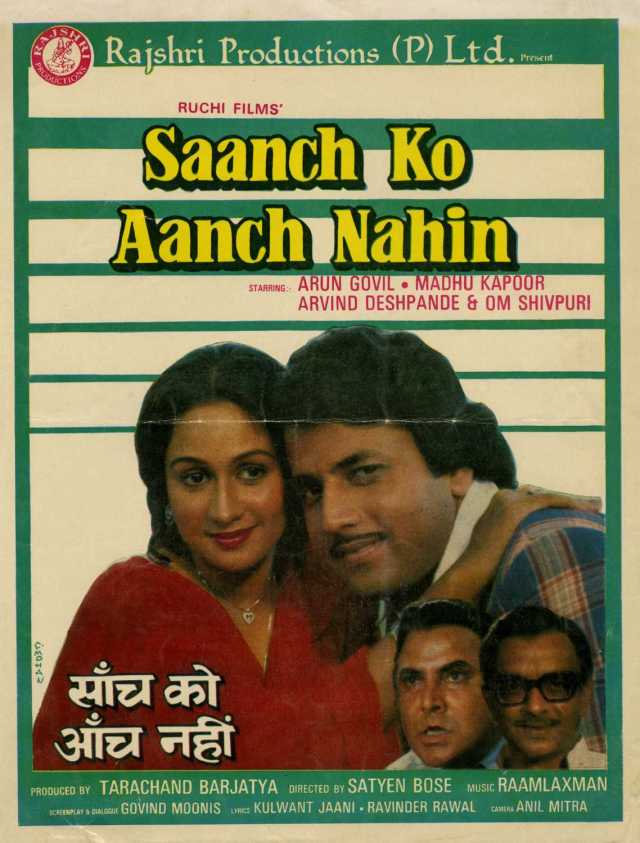 Ramlaxman has composed good music strictly in line with the Rajshri tradition, spreading the fragrance of Indian soil with the help of beautiful lyrics of Kulwant Jaani and Ravinder Rawal. The best song of the movie is the engagement song – Aaj Meri Didi Ki Sagaai Ho Gayi – sung by Usha Mangeshkar and filmed on Komal Mahuvakar (who has played the younger sister of the heroine). My personal favourite song from this movie is – Aankhon Aankhon Mein Dil Gaya Apna Kaanon Kaanon Hamen Khabar Na Huyi which is actually a Ghazal filmed upon the young couple of the movie and sung by Shailendra Singh. The title song is also impressive.

Since the movie has a simple backdrop, simple sets only have been made without pump and show or display of luxuries. The costumes of the characters also display a milieu filled with simplicity and depict the honesty of the moviemakers. Editing could have been better. Else the technical aspects are more or less ok.

My final words, director Satyen Bose has made a good movie by adapting the classic story of Munshi Premchand which declares the immortality of the ideals of truth and justice. If you are interested in watching a simple movie with simple but lovable characters and adherence to Indian traditions and family values, Saanch Ko Aanch Nahin will not disappoint you.