This is a long overdue movie review because my friend and well-wisher Geetashree Chatterjee who is an extraordinary reviewer in her own right (in addition to being an outstanding authoress and poetess) had made a friendly request to me to review this movie many years back (she herself must have forgotten about it by now) but somehow I could not do it. Well, better late than never. Hence here comes the review of Life In A … Metro (2007) which is a Hindi movie directed by Anurag Basu.

Anurag Basu is definitely a good director but like many other good directors, he lacks originality and hence lifts not only stories but also scenes from various (mostly Hollywood) movies. Life In A … Metro is no exception but he has executed the idea fairly well. The movie is overall a good one which impresses to a great extent. All the same, it is to be admitted that director Basu has not done complete justice to the stuff at his hand.

The movie contains many stories running parallel to one another (total four) and every character of every story is related to at least one of the characters of some other story. The stories (and their characters) cross path at some point after the interval. There are total four such tracks. The first one is of the married couple of Kay Kay Menon and Shilpa Shetty who are having a baby out of their wedlock. Theirs is not a happy wedded life as Kay Kay is an infidel husband and is having an affair with a girl working in his company (Kangana Ranaut). A sincere youth Sharman Joshi also works in the same company and loves Kangana in his heart. Thus both these youths are bossed by Kay Kay who exploits them and they willingly get exploited for the sake of their respective careers. Kangana allows Kay Kay to use her body (without any emotional connect between them) whereas Sharman provides the key of his flat to Kay Kay to carry on with his illicit affair with Kangana (despite the fact that he himself is emotionally attached to Kangana). He provides that ‘facility’ to his other colleagues also for making additional income.

On the other hand, Kay Kay’s frustrated but helpless wife Shilpa Shetty happens to come across an artist Shiny Ahuja who is a divorcee. They find each other on the same wavelength in no time and Shiny starts loving Shilpa whereas Shilpa despite liking him, is hesitant to get out of her wedlock. Kay Kay is a chauvinist who maintains double standards. He is unapologetically having an affair with Kangana but is not ready to tolerate Shilpa doing the same (or something similar) in her life. In other words, a lubricious husband Kay Kay wants his wife Shilpa to remain a Sati Saavitri.

The third track belongs to an elderly duo – Dharmendra and Nafisa Ali. Dharmendra had dumped his love for the sake of his career but realized his mistake in the twilight zone of his life and he comes to India from abroad for the sake of his old (and still existing) love for Nafisa who is now awaiting her death in an old age home. They decide to live together in that ending phase of their life but death does them apart when Nafisa passes away in their night of physical togetherness. Thus Dharmendra learns the invaluable lesson of life to prefer love and relationship over career and success the hardest way.

The fourth track is of Konkona Sen Sharma and Irrfan who are bachelors while in their thirties. Konkona is Shilpa’s sister and Kangana’s roommate. Her quest for a soulmate (or at least a straight beau) continues until she meets Irrfan. This is a fun-filled track in this otherwise serious movie which, quite naturally, culminates in the union of these two singles who had been ready to mingle for years and years before running into each other. 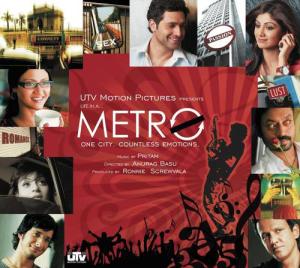 The movie is an entertaining one and the first three tracks strike a chord also in the viewer’s heart (though it’s the fourth track only which finally makes him feel better) in the pre-interval session. However the post-interval session lets the viewer down to some extent if not fully. The stories do not move ahead properly and the characters do not behave in a natural manner in the narrative which appears to lose the right track after the interval point. Dragging begins and a feeling starts coming to the viewer that now the narrator has to end these stories (and the movie) anyhow, convincingly or unconvincingly. Anurag Basu has made silly errors of milieu also which can be caught by any attentive viewer.

The career-oriented youths in the (metro) cities are ready to do anything and pay any cost without having any moral issues to rise (materialistically) in life as per the vision of the director. Well, I have also spent time in metropolitan cities but not sure whether this is a universal truth. And even if we get ready to consider it a universal truth, it is not and cannot be specific for the metros. The same must be true for the working life of the youths in small towns also. The director has not been successful in selling this idea to the audience despite hard-hitting scenes and dialogues. By default perhaps, the director has depicted almost all the characters as trying to make peace with themselves and resolve their inner conflicts. But that’s also a reality which cannot be confined to metro cities only.

Male-chauvinism is a reality whether in a metro or in a small town or in a village but why should a well-educated and cultured lady decide to stay in a stinking wedlock with an infidel and abusive male instead of moving ahead in life with someone who truly understands her, loves her and is ready to shoulder the responsibility of her kid from the failed marriage also ? Shilpa’s bidding goodbye to Shiny in the end and staying back with Kay Kay is hard to digest. Then this is not life in a metro. This is the same slavish mindset of Indian females that has been continuing since the feudalistic age or better say, times immemorial. 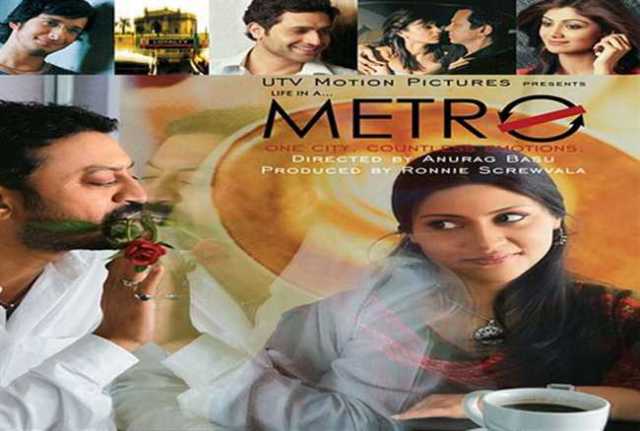 Konkona-Irrfan track is a rom-com and provides relief moments in the movie. This track only can be said to end on a happy note, not the other three ones though Kangana accepts Sharman’s love and ends her illicit affair with her boss, i.e., Kay Kay (who has no need now to give the key of his flat to his boss as he himself can ‘use’ it). Nafisa’s death makes the viewer sad but at the same he is also made to feel that it was quite unnecessary. When the movie ends, it renders a feeling to have watched an interesting and a fairly good movie but not something extraordinary or outstanding or even highly laudable.

The performances are the best part of this product. All the actors have risen above the script and rendered credibility to their characters. Actors like Konkona and Irrfan who are better known for their intense performances, have surprised with their brilliant comic timing. All others are also completely natural and highly impressive in their respective roles. The movie would have been a disaster had the performances not been up to the mark. However the director has shortchanged a talented actor like Shiny Ahuja by giving him much less footage than deserved by him as well as his role.

As asserted in the beginning of this review, the writer-director Anurag Basu has lifted story and sequences from many movies. Still he could not make a movie which could be called an outstanding one (after a few years, he achieved this feat with Barfi). In his view, selling (and buying) of sexual favours and doing (or abetting) immoral things for material gain culminating in illicit relationships is a norm in metro cities and not fidelity, sincerity and truthfulness in male-female relationships as well as restricting needs and desires to one’s means. I am finding it hard to accept. Exceptions do not form the rule Mr. Basu.