Posted on December 1, 2018 by Jitendra Mathur

I got married on 1st December, 1995 with Amita. Now we have two kids – Swayamprabha and Saurav. Our happy wedded life has gone through several tests of time and after living in many different places of India (due to my changing jobs), presently we are living at Hyderabad. Myself being an employee of Bharat Heavy Electricals Limited, we have preferred to reside in the township built for the employees instead of renting a house outside and get HRA from the company simply because the township is free from the noise and pollution of the city and studded with greenery and natural beauty and both of us alongwith our children like such a living environment only. My mother was also with us (she passed away on 23.01.2018). Hence this five member family used to live at BHEL township in the quarter allotted to me. Earlier our residence was on the first floor of the residential block, hence we were not having the facility of the garden like the people living on the ground floor. However since the roof was ours (there is no second floor in the block), we are happy with that also. Today, when 23 years of our married life have completed, I am sharing with all of you the amusing happenings of 5 years back.

On 1st December, 2013, we celebrated our wedding anniversary within the family only. My wife prepared the cake herself. This day being Sunday, we cut the cake in the afternoon itself and in the evening, we went out to a nice restaurant for dinner. I wanted to watch a movie with my wife because despite being a movie buff, I have to watch most of the movies alone only (as my wife does not get time to watch many movies, nor is she so much fond of them). I have made it a principle that we (myself and wife) should watch at least one movie in theatre together every year. In 2012, we had watched Talaash together. Since then one year had passed and we had not seen any movie in theatre together. However it was not possible on Sunday because my daughter, being very busy with her studies, could not go with us and my son does not have the patience to sit for two and a half hours in theatre. Plus no such movie was being run in the nearest multiplex which could be watched by a family together. So my idea (or desire) could not materialize on the wedding anniversary day. 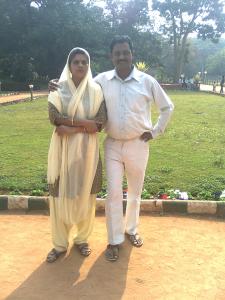 To complete the celebration in the desired fashion, I took leave from my office on 03.12.2013 and we started off on our beloved scooter to reach the nearest multiplex (Talkie Town now rechristened as Cine Town) at 11 a.m. The break of the scooter was not functioning properly. No sooner did we come out of the gate of the township and entered the traffic on the road, then I could not stop the scooter from colliding with a tempo ahead of us (because the break did not work). My wife escaped any injury and we escaped any quarrel with the tempo driver also. I got small injury in my finger. But the significant thing is that the scooter did not fall down and the engine did not stop. Albeit the iron guard on the front came off the body of the scooter because of the collision.

Now we had two options, the first one was to reach the mechanic and get the scooter repaired and the second one was to postpone the repair work and watch the movie first. We decided in favour of the second option and I drove off (this time driving very slow and with a lot of caution) to the multiplex. Being a working day, we immediately got the tickets of Bullet Raja and by the time we entered the hall, the movie had started. We enjoyed that action-packed flick very much and since the hall was almost empty, we moved off from our balcony seats to a box seat (meant for couple) in the post-interval session. In the interval, we wanted coffee but there was no coffee available. We ate popcorn only.

While coming back, we were feeling quite exhausted. Hence we reached our home first instead of going to the mechanic(in the return journey too, I had to drive with utmost caution). As both of us were very tired and my wife was feeling a bit of temperature too, we consumed ginger tea at our home and I gave the scooter to the nearest available mechanic after one hour or so. In the evening, we narrated the incident to our children too and just before sleeping, discussed the day again. Despite the near-mishap, we had enjoyed the day in style and felt happy about it.

A Chartered Accountant with literary passion and a fondness for fine arts
View all posts by Jitendra Mathur →
This entry was posted in Uncategorized and tagged Bullet Raja, marriage anniversary celebration. Bookmark the permalink.

22 Responses to A belated marriage anniversary celebration which became unforgettable