Love can resolve all the problems of life

A few years back, I happened to watch Golmaal 3 (2010) in the BHEL club and found it so pathetic that I had to leave it in the interval itself. Its plot is based on that of a Hollywood movie – Yours, Mine and Ours (1968). Contrary to Golmaal 3, much better Bollywood movies were made on the same story during the seventies. One was Hamaare Tumhaare (1979) starring Sanjeev Kumar and Raakhee in lead roles. It was directed by Umesh Mehra. However even better movie had come just a year back which was Khatta Meetha (1978) directed by none other than Basu Chatterjee, the pioneer of middle class and simple but heart-conquering cinema in Bollywood. Basu Da took the basic grains from Yours, Mine and Ours to make the movie in Indian middle class milieu, featuring characters next door. It’s a memorable movie and miles ahead of Golmaal 3. After four decades of its release, now it’s considered a classic which makes you laugh naturally as well as emote naturally.

Khatta Meetha (sour sweet) is the tale that lays out the sweetness of love in life that enables the human-beings to endure the unavoidable sourness of experiences. As its plot is a take on Yours, Mine and Ours, the story takes shape with the marriage of two lonely senior citizens – Homi Mistry (Ashok Kumar) and Nargis Sethna (Pearl Padamsee). Since both of them are having grown up children, their union in life results in their families too joining to make an extended family. Their children are not happy with the marriage of their (respective) father and mother. Quarrels take place between them with the parents (half biological and half legal) trying to patch up the things and keep the family united. Nargis’ son Feroze (Rakesh Roshan) falls in love with Zarine (Bindiya Goswami) who is the daughter of an egoist businessman (Pradeep Kumar) who is mentally not prepared to allow his daughter to marry an ordinary youth and become daughter-in-law of an ordinary middle-class family. He takes steps to harass the family so that the family itself doesn’t accept Zarine. However in the end, he himself has to bow before the strength of love within the family and conviction of its head – Homi Mistry that nothing can become a wall in the path of the happiness of his family.

Khatta Meetha is a signature movie of Basu Da. Each and every frame of the movie and each and every character of the story seems familiar to the typical Indian spectator who comes from the salaried middle class living a normal life but dreams big. I have a great regard for the Paarsi community who despite being a minority community in India, has never begged for any privileges and instead contributed immensely for the growth of the country. It’s a community which has always taken interest in giving something to the society and the nation instead of demanding. Regretfully (and unjustifiably), the Bollywood filmmakers have mocked this community in the Hindi movies. Khatta Meetha is a welcome change from this defective Bollywood tradition. It has shown the Paarsi characters of the movie as normal flesh and blood human-beings like the other communities and presented an authentic account of their life. Basu Da did the same thing later for the Christian community also in Baton Baton Mein (1979). 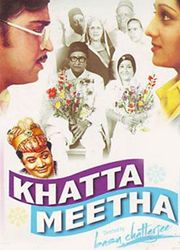 Khatta Meetha can be considered a comedy because it tickles and entertains. However it is not a slapstick comedy and creates natural laughs and smiles in the audience. The comedy of the movie is not forced on the spectators, it is felt by them. And the sentiments embedded in the story are also felt by them in equal manner because there is nothing that can be considered as over the top. The viewer feels his heart beating for the members of the extended family and his eyes getting humid over their sufferings. The viewer laughs with them and weeps for them.

Finally, it’s a great movie because it propagates the ages old Indian philosophy of non-accumulation and echoes Mahatma Gandhi’s watchword of simple living and high thinking through the presentation of the story and the immortal song of Kishore Kumar and Lata Mangeshkar – Thoda Hai, Thode Ki Zaroorat Hai, Zindagi Phir Bhi Yahaan Khoobsurat Hai (we have little and we need little, nevertheless the life is beautiful here). A great lesson for all and sundry. 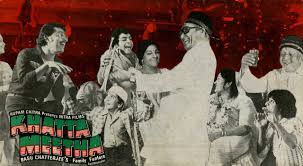 All the performers in the movie have done well including Ranjeet Chaudhary, Ravi Raj, Devendra Khandelwal, Vimal Sahu, Preeti Ganguly, Master Raju, Pradeep Kumar, Deven Varma, Piloo Wadia, David, Keshto Mukherjee, Bindiya Goswami etc. Today’s superstar Hrithik Roshan’s father – Rakesh Roshan could not become a big hero in his time but he was successful in carving a niche for himself as well as creating his fan-following through such simple, low budget and heart-winning movies. However the performers who stand tallest are Ashok Kumar and Pearl Padamsee as the senior citizen couple. Dada Muni (Ashok Kumar) has delivered a mesmerizing performance and Pearl Padamsee has rubbed shoulders with him step by step. It’s a treat to watch the performance of these stalwart artists on the screen.

Rakesh Roshan’s younger brother – Rajesh Roshan has composed unforgettable gems for this movie with the help of Gulzar’s heart-conquering lyrics. Other than the immortal – Thoda Hai, Thode Ki Zaroorat Hai, the music of the movie consists of another gem – Yeh Jeena Hai Angoor Ka Daana (the title track in the voices of Kishore Kumar and Usha Mangeshkar). There are hilarious songs viz. Mummy O Mummy, Tu Kab Saas Banegi; Roll Roll and Frenny O Frenny in the movie. Besides, it contains a song which has made a permanent place in my heart. It is Kishore-Lata duet – Tumse Mila Tha Pyar Kuchh Achchhe Naseeb Se, Hum Unn Dino Ameer The Jab Tum Kareeb The.

Technically, the movie is perfect because it portrays the milieu that it purports to portray. Art director and cinematographer have done an outstanding job in creating a middle class environment on the screen. Editor has also done his job pretty well and there is not even an ounce of boredom in the movie. The background score perfectly sets the tone of the movie. Dialogues are also impressive.

My final words – the great message delivered by this highly entertaining and inspiring classic is – do believe in the strength of love, keep the love within the family intact and strengthen it. Love is the panacea for all the ills, the master-key for all the locks and the solution to all the problems of life. In this era of nuclear families, Khatta Meetha shows how the members of an extended family can adjust with one another, even out mutual differences and join hands to stand up to any external threat which is common to the family as a whole. The analogy of family can be used for the whole nation too. In a country like India where a general license seems to have been issued to hate others, this movie teaches to love and believe in the power of love.

4 Responses to Love can resolve all the problems of life