Posted on September 29, 2018 by Jitendra Mathur

Time and again I go back to the words of an accomplished movie reviewer – Aruna Thyagarajan (moviezombie)  – Review is about feelings and what the movie evokes in one. Moviemaking and movie viewing is so subjective….never know who it reaches out to and how. Very true, very true indeed. A movie (or a book) may not be liked by the majority but it may appeal to somebody. A flop or unsuccessful fictional work may strike a chord in the heart of a particular person. And then the review of that work by that person particular is bound to be positive because he (or she) has found something likable in it, something in that has touched him (or her).

The same thing is applicable to myself and the movie I am reviewing as of now. This movie was released on 03rd August, 2001 and not only almost all the reviewers brushed it aside like anything but also it flopped so badly that it was telecast on Zee TV on 29th September, 2001 only, i.e., exactly seventeen years back. I had watched it during that telecast only and found that a chord had been struck in my heart. The readers (who have watched this movie) may or may not agree to my analysis and assessment of this movie. However as asserted in the first para, it’s my subjective opinion. This movie is Hum Ho Gaye Aap Ke (2001)

Good guys. Bad guys. Good gals. Bad gals. Should the youths be categorized in such stereotypes ? To be fair – no. However the public opinion is expressed through stereotypes only which become labels for people. As we know, since a person’s public image walks ahead of him, the virtues of a guy (or a gal) who has been labelled as a bad one, are ignored like anything. But the fact is, the personalities of real flesh and blood human-beings contain gray shades. A person labelled as good may do something bad and correspondingly, a person labelled as bad may prove his goodness when the time strikes.

Hum Ho Gaye Aap Ke (I have become yours) is the story of Rishi (Fardeen Khan) who is the well-known brat of a business family containing only his father (Suresh Oberoi). He is deprived of mother and sister. And hence he has learnt to see the girls as sex object only and treats every girl coming across him as ‘available against generous consideration’. Besides, he is an alcoholic who drinks without caring for the time, the place and who is around him. According to his habit and character, he makes indecent proposal to Chaandni (Reema Sen) who is a middle class girl with a strong personality and high morals. She not only turns down his proposal but also rebukes him. Rishi takes it casually and forgets it under his ‘you win some, you lose some’ philosophy.

However an employee in Rishi’s company, Mohan (Apoorva Agnihotri) comes in contact with Chaandni and befriends her. Chaandni also likes his nature and they become good friends. Mohan becomes emotional about her. When Chaandni is engaged to someone else, Mohan sends her a letter through Rishi saying that he won’t be able to live without her. Rishi takes this much pain because he considers Mohan his close friend, not just an employee in his concern. Chaandni feels it appropriate to respond to Mohan’s sentiments who comes from a modest background and longs for true love of someone. Hence she runs away from her marriage and reaches Mohan’s house alongwith Rishi. But she is taken aback to find that Mohan proves himself to be a coward as well as a hypocrite. He bows before the pressure and emotional blackmail of his selfish and old-fashioned parents (who want to marry him somewhere else for the sake of dowry) and refuses to accept Chaandni in his life.

Now Chaandni feels quite lonely and devoid of any support in the world because now she cannot go back to her parental house also. Rishi offers her to move to his home and promises her decency and safety (from himself also). She feels that despite apparently being a brat, Rishi is not bad by heart. She trusts him and moves to his household where Rishi’s father welcomes the unexpected guest with surprise. With her good behaviour, pleasant manners and kind-heartedness, she wins the hearts of all who come into her contact there. She joins Rishi’s office also and as she is able to locate the virtues in Rishi’s personality, she not only gets closer to him but also becomes successful in transforming his personality (after understanding the reason behind his spoilage). Mohan tries to be close to her again but she keeps him at bay (though forgives him).

Rishi’s father comes to know that his son has started loving Chaandni but he hurts Chaandni’s self-respect by indicating to her that she is a gold-digger and has trapped Rishi in her love for the sake of her social and monetary security. She gets out of Rishi’s house and life only to be reunited with him in the end.

The movie is an emotional one and underscores the importance of company. Not only a man is known by the company he keeps but also a man is shaped by the company he gets. A good guy can be spoilt in bad company but his personality can be cleansed of the evils through good company which can act as a catalyst to exasperate the good in him and help him to get rid of bad habits and routines.

Director Ahathian has directed the movie properly. The flaws are there in the screenplay as well as the characterization of certain characters of the story. Still I found the movie to be emotionally appealing and when it was over, I got the satisfaction of watching a good movie. Just like its subject matter, perhaps the movie also suffered from the labelling by the reviewers (as bad).

The twist in the story when Mohan refuses to accept Chaandni who has run away from her home for his sake only, is very interesting. And before that as well as after that, the director has kept the viewers’ interest alive for the major part of the movie. It may be a flawed movie but not a boring movie (at least in my opinion). There is no undue digression in the storyline and it moves towards the desired end only right from the word ‘go’.

Nadeem Shravan’s music is a big asset of the movie. The title track (sung by Alka Yagnik and Kumar Sanu) is the best one which has been picturized very romantically. Other songs are also pretty good to listen. The music directors have kept the melody intact while composing the tunes which was true to their reputation in that period. 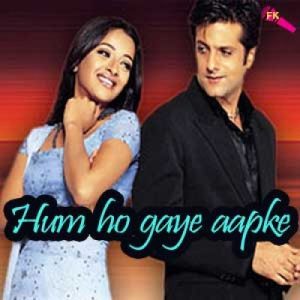 The dialogues are also appealing and impressive. Cinematography, editing, art direction and production value aspects are all up to the mark.

It’s the debut movie of Reema Sen who not only looks pretty but has performed also quite well. Despite being the hero-oriented film, it’s her character which is the pivotal wheel of the script. Fardeen Khan is not a very good actor but he has done satisfactorily in the assigned role. Among others, Suresh Oberoi is excellent, rest all are routine. Apoorva Agnihotri has tried his level best as Mohan but his characterization itself is defective and unreal. 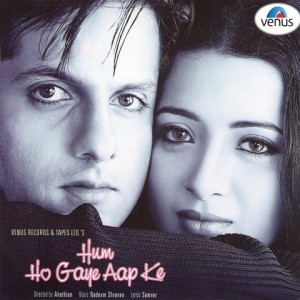 Hum Ho Gaye Aap Ke is not a great movie but it is not so bad also as it was criticized. It touched me perhaps because I am a very sentimental person or perhaps the message of the movie matched my own thoughts about people. Well, I firmly opine that a good seed needs good soil, clean water, healthy environment and proper nurturing also to grow into and become a stout tree.

Since I liked this movie and it evoked positive feelings in me, I am recommending it.

A Chartered Accountant with literary passion and a fondness for fine arts
View all posts by Jitendra Mathur →
This entry was posted in Movie Review and tagged a man is known by the company he keeps, a man is shaped by the company he gets, Ahathian, Apoorva Agnihotri, available against generous consideration, Fardeen Khan, Movie Review - Hum Ho Gaye Aap Ke (2001), Nadeem Shravan, Reema Sen, Review is about feelings and what the movie evokes in on, Suresh Oberoi. Bookmark the permalink.

11 Responses to I like this flop and criticized movie