Watch this crime-thriller for lifetime laughs

I have felt that many Bollywood movies became outstanding or simply very good not by deliberate effort but by default. Sholay (1975) is a great example in my opinion. Neither its writers (Salim-Javed), nor its director (Ramesh Sippy) had thought during its making that they were going to make a timeless classic. They were only making a multi-starrer formula movie whose plot was also not original. However by default, everything fell just in place in the movie and it became something outstanding. A similar thing seems to have happened with Victoria No. 203 which had been made by the director Brij (Sadanah) in 1972, taking Navin Nischal and Saira Banu in romantic lead.

Director Brij had perhaps a fancy for involvement of diamonds in the plot of his movies as many of his movies are regarding theft of diamond or diamonds. Anyway, there was a set pattern in several Bollywood movies of the sixties and the seventies that a crime based story was taken, showing triumph of good over evil in the end, inter-mixing one comedy plot and one romantic plot (with some songs) in between plus applying a Tadka of some emotion and some action to the dish and then supposing it to be delicious for two and half hours entertainment for the Indian audience who was supposed to be habituated of seeing such so called social thrillers. Victoria No. 203 was no exception but the comedy track interwoven in the crime based plot superseded everything else by default and that played magic with this ordinary movie.

I am not trying to take away the credit from the director. In fact, the intelligent casting of the comedians was that x-factor which made the movie extra-ordinary. While making selection for the pair of two aged friends, getting in and out of jail every now and then, the director made a very intelligent decision, virtually a masterstroke which made this movie a winner. The first selection was Ashok Kumar, the legendary Dada Muni of Bollywood who was always kept in such high esteem by the filmmakers that whosoever might be in the lead roles, his name was displayed first in the credits. And the second one was Pran, the quintessential Bollywood villain who was so much hated by the audience due to his baddy roles that for around two decades, people had stopped keeping the name of a newborn as Pran. Comedy ! By these two ! Something beyond imagination at that time. But it happened and it became the USP of this movie forever.

The story is regarding the theft of diamonds from a museum which due to multiple crosses taken place between the criminals, led to hiding of the diamonds by the dying thief in a Victoria (horse-driven rickshaw in Mumbai in those times) numbered as 203. The mastermind behind the theft is after them with his gang but  destiny pulls two regular jail-birds of old age also into this crime-dynamics. In the end, the main villain is caught, the diamonds which are the national property, are found; the innocent father of our heroine who owns this Victoria is released from jail and one of the two aged friends (Pran) gets his lost son (our hero) who has been fostered by the villain for years. But in between, we have a two hours and odd minutes long laugh riot alongwith murders, chases and thrill.

Ashok Kumar plays a skirt-chasing alcoholic with Pran as his somewhat sensible buddy. These two play so much with the funny bone of the audience during the movie that you just forget about the main plot and keep on laughing and enjoying with these two. The chemistry between these two aged protagonists is so amazing that it can only be felt by seeing on the screen, cannot be explained in words. Every now and then, you start laughing. The screenplay writer deserves full marks for writing genuine laughter-generating scenes for them and the director has demonstrated his better judgment by giving ample footage to this comedian duo. The full length song – Do Bechare, Bina Sahaare is simply great to hear and more so to watch. This song itself is just like a short laughter show presented by Ashok Kumar and Pran.

When I see slapstick comedies made in India, I start thinking about this movie which is a lesson in making comedy movies though category wise talking, it is a crime-thriller. All the laughs generated are genuine and arise straight from your heart. Only this aspect has given this movie a repeat value and it can be watched for any number of times just for the laughter-stock.

Other than Ashok Kumar and Pran whose already decorated caps got another feather added by this movie,  Naveen Nischal and Saira Banu have done well as the lead romantic pair. The baddies are okay alongwith the character and the child artists. Other than the already mentioned – Do Bechare, Bina Sahare; the songs (penned by Verma Malik and composed by Kalyanji Anandji) of the movie are okay. The song in which Saira Banu induces Ranjeet, renders an erotic effect. The editor could not have done a better job as the regular formula movies were made in those times in such a way as to expand the plot on a two and half hours long canvas. Art direction and other technical aspects are also in order. 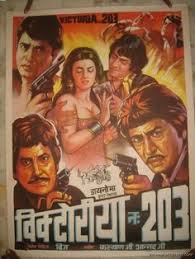 Brij Sadanah committed suicide in 1990 after allegedly killing his wife and daughter. His son Kamal became an actor and played hero to heroines like Kajol and Divya Bharti in the nineties. In 2007, Kamal remade Victoria No. 203 by taking Anupam Kher and Om Puri in the roles of Ashok Kumar and Pran but it did not work. Good movies are made with great effort but masterpieces are made by default. Old Victoria No. 203 is such a masterpiece only. That magic cannot be repeated by making remakes.

My verdict is – please watch this crime-thriller for laughs of a life time. If you have not watched it, you are missing a very big laughter-treat.

9 Responses to Watch this crime-thriller for lifetime laughs