The unforgettable Battle of Loungewala

Another Independence Day of India has arrived. 71 years completed. Still we crave for patriotic movies able to arouse our love for our country in the most emotional manner. J.P. Dutta made one such movie in the year 1997 titled as Border which is a landmark in the series of war-based movies in India. In my subjective opinion, it is the second best war movie ever made in India (the best being Haqeeqat made in 1964 by Chetan Anand). I like this movie so much that I have watched it five times in theatre and even more on the small screen. More than the action, it is the patriotic emotion exasperated by this movie that always appeals to me and forces me to watch this movie once more.

It is based on the famous Battle of Loungewala happened on the Loungewala post near Jaisalmer (Rajasthan) during the Indo-Pak war of 1971. Major Kuldip Singh Chandpuri (still alive) led the small force containing a handful of soldiers (total 120) and took on the might of some 2000 and odd Pakistani opponents during that fateful night of 4th December, 1971. J.P. Dutta has presented that memorable battle alongwith all its leading events and facts in the most authentic and impressive manner.

Sunny Deol plays the role of Major Kuldip Singh who gets an assembled force to protect the post of Loungewala which includes Captain Bhairon Singh (Sunil Shetty), 2nd Lieutenant Dharmveer (Akshaye Khanna), Subedar Ratan Singh (Puneet Issar), Subedar Mathura Daas (Sudesh Berry) and like wise. This small armed force has a cook Bhaagi Ram (Kulbhushan Kharbanda) who is an old buddy of Subedar Ratan Singh. Very near to them is the Wing Commander Andy (Jackie Shroff) busy in making an altogether new airbase right from scratch. He is supposed to help the army troops with his fighter planes but when the deadly hour comes, he is not able to do so because the planes under his control can not fly in the night. He is able to reach them and start bombarding the Pakistani tanks in the morning only. By that time, those 120 soldiers have to spend the deadly night, staring straight in the eyes of the death. And they do so with courage and conviction and during this exercise several of them lay their lives for the cause of the motherland.

J.P. Dutta’s own brother Deepak had got martyrdom in this war. Hence he has made this movie with personal emotions. That’s why Border seems to be coming straight out of his heart. Right from the very first frame, the movie grips the viewer and does not leave him till the very end. These emotions only seem to have led Dutta to go for some rhetoric too which could have been done away with. The shooting on real location with the utmost realistic revisiting of the warlike environment, the arms and the ammunition and finally the scenes of the war is simply mesmerizing and showcases Dutta’s highly admirable talent in making this type of a movie. The toil and sincerity of Dutta and his whole team speaks for itself from each and every frame of the movie. It does not appear even for a moment that we are watching something imaginary. The viewer gets a genuine feeling of witnessing that unforgettable battle. The display of relevant locations and dates on the screen alongwith the scenes makes the narrative highly authentic. The personal problems of the soldiers alongwith the leave issues, the sentiments associated with the letters coming from their homes, the learning of a young militaryman as to how to kill the enemy without getting emotional about him etc. are the sensitive points dealt with by the master director with utmost care and sensitivity.

For the technical aspects and the action scenes of the movie; the more we praise it, the better. Watching the war scenes on the big screen is a treat for the action lovers. There is momentum in the movie throughout, barring some romantic tracks and some songs. Cinematography and editing, both are at their very best. Screenplay has been written by Dutta himself whereas his father O.P. Dutta has written the dialogues. Dialogues could have been better. However J.P. Dutta has been able to cover this weakness by his forceful screenplay and action on the screen. 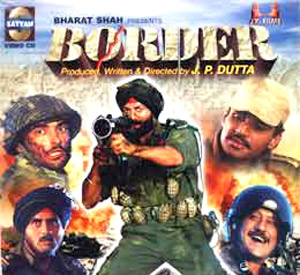 J.P. Dutta has also exhibited the exemplary secular character of our country and the liberal and all-embracing feature of Hinduism. Sunil Shetty’s act of saving the copy of Quran Sharif from the burning house demonstrates the secularism prevalent in our country vis-a-vis the discardable fundamentalism propagated by our sworn enemy.

Anu Malik has composed highly admirable music for this movie and strung the beautiful words penned by Javed Akhtar in memorable songs. Sandese Aate Hain by Sonu Nigam, Roop Kumar Rathod and others is definitely a memorable song to listen to as well as watch on the screen. Hindustan Hindustan Meri Jaan Hindustan at the end of the movie, Mere Dushman Mere Bhai Mere Humsaaye by Hariharan and the romantic song – Hamen Jabse Mohabbat Ho Gayi Hai by Alka Yagnik and Sonu Nigam are all very good to listen. The romantic song by Roop Kumar Rathod picturized upon Sunil Shetty and Sharbani Mukherjee playing his wife on their first conjugal night – Aye Jaate Huye Lamhon, Zara Thehero Zara Thehero is one of my most favourite romantic-emotional songs.

Performance wise talking, since Border is a male-oriented movie, the female cast (barring some footage coming in the share of Raakhee and Pooja Bhatt) did not get much to do. The track of Sapna Bedi as the romantic angle for Jackie Shroff is totally superfluous whereas Tabu as Kuldip Singh’s wife has got a ‘blink and you miss’ kind of role. However the actresses in their odd scenes and songs have not disappointed.

The movie mainly belongs to the male cast. Sunny Deol has given a towering performance and I suppose even the real life Major (later Brigadier) Kuldip Singh Chandpuri also must have praised him after seeing the movie. Barely 22 years old Akshaye Khanna has delivered a highly mature performance as Dharmveer. Jackie Shroff, Kulbhushan Kharbanda, Puneel Issar, Sudesh Berry and many more characters playing the soldiers have done quite well. The admirable thing is that every character is able to maintain its separate identity in the movie and make the viewer feel its presence. Finally, the actor who conquered the heart of Jitendra Mathur is Sunil Shetty. Sunil as Captain Bhairon Singh who is highly emotional for his motherland, quietly stepped deep into my heart with his touching performance.

For a person who has liked this movie (just like me) it has enormous repeat value and can be watched any number of times. It’s a memorable movie upon an unforgettable historical event.

4 Responses to The unforgettable Battle of Loungewala