Two reasons prompted me to pen this review. Firstly, today is the 85th birth anniversary of Meena Kumari, the great actress whose legend continues even after passage of more than four and a half decades since her demise. Secondly, the rainy month (Saawan) is underway and this movie opens with the song – Pad Gaye Jhoole Saawan Root Aaee Re. Hence after watching this movie on internet (earlier I had watched it on Doordarshan long long back), I started writing its review.

During the decade of the sixties, three triangular love stories were made in Bollywood taking Ashok Kumar, Meena Kumari and Pradeep Kumar in lead roles with Meena Kumari being the female caught between these two males. Interestingly, in none of these movies, did Ashok Kumar get Meena Kumari in the end and Pradeep Kumar only proved to be her lucky lover in all of them. The first two movies were Aarti (1962) and Bheegi Raat (1965) which I have already reviewed. Now comes the review of the third and final part of this (supposed) trilogy which is Bahu Begum (1967). 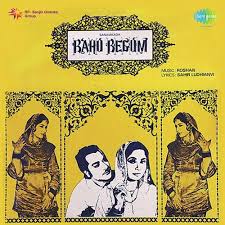 ‘Bahu’ means daughter-in-law and ‘Begum’ means queen. In cultured Muslim families of the bygone era, when a newly married girl entered the house of her in-laws, she was lovingly called as Bahu Begum only. This is the story of that bygone era which can now be found in literature and such period movies only. The story is set in Lucknow  and though I have never visited Lucknow, I don’t think that environment (as prevails in this movie) can be seen or felt in the world famous City of Tehzeeb (culture). Jaanisaar Akhtar, the eminent Shaayar (Urdu poet) of India and father of Javed Akhtar (and also the grandfather of Farhaan Akhtar) has produced this movie and written its story. 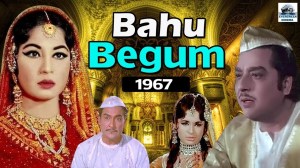 After the independence of India, the princely states lost their existence under the procedure of unification of the nation. Though the rulers of the erstwhile princely states were allowed hefty sums as their annual privy purses (that system was also abolished by Mrs. Indira Gandhi in 1971 through a constitutional amendment), the financial condition of most of the erstwhile rulers met a slide. Those who were not prudent enough to invest their money properly or earn out of the assets held by them, faced severe financial difficulty. Such erstwhile rulers included Muslim rules also known as Nawaabs. This movie narrates the tale of a few such people only.

Zeenat (Meena Kumari) is the at the nucleus of the story of Bahu Begum whose father is an impoverished erstwhile Nawaab Mirza Sultan (Sapru) who becomes too glad to receive a matrimonial alliance proposal for his daughter from Nawaab Sikandar Mirza (Ashok Kumar) who is also an erstwhile ruler but financially well off. The thing that he does not know that Zeenat is in love with Yusuf (Pradeep Kumar) who is an orphan and his guardian is his greedy maternal uncle Meer Qurbaan Ali (Baalam) who doesn’t want Yusuf’s marriage to take place because that will snatch the custodianship of his property from him. Zeenat remains under a false impression that she would be married to Yusuf only who is intentionally sent outstation by his maternal uncle at that time. When the marriage procession of the groom’s side (Baaraat) arrives at her place, then only she comes to know that her would-be groom is not Yusuf but Sikandar Mirza. She runs away from the house when the Qaazi (Muslim priest in the marriage) was going through the customs of the Nikaah (Muslim marriage). Since in Nikaah, both the bride and the groom are asked whether this marriage is acceptable (Qabool) to them, it is asked from Zeenat also who is supposed to be behind the curtain. A false impression is given to the Qaazi and the groom (Dulha) that the marriage is acceptable to the bride but actually she has run away from the house with the help of her close friend Bilqees (Zeb Rehman).

When Zeenat’s father comes to know the truth, he sends the empty sedan to groom’s house so that the bride’s runaway story remains hidden from the public eyes. At his home, Sikandar Mirza, the groom and his younger sister Suraiya (Naaz) who is too eager to welcome her sister-in-law (Bhaabhi) are shocked to see that there is nobody in the sedan which was supposed to bring the bride in it. To protect their family honour, they do not allow any outsider to know the truth and it is told to the others that the bride is sick. On the other side, when the runaway bride, i.e., Zeenat is not able to meet her beau Yusuf (because he has been sent outstation by his conspiring maternal uncle), she returns home only to be discarded by her hurt father. Her misfortune takes her to a Kotha (bawdy-house) but thereafter destiny brings her to that place only which is supposed to be her in-law’s house, i.e., the residence of Sikandar Mirza who alongwith his sister Suraiya is pleasantly surprised to see that the bride or the Bahu Begum has finally come to her destination. Her arrival is a great sigh of relief for them and now they pleasantly show the ‘Bahu Begum’ to the outsiders (females only due to the tradition of Muslim ladies’ remaining behind the veil in the presence of the males not belonging to them). 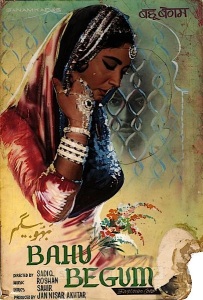 But Zeenat tells Sikandar Mirza that when the marriage was being accomplished by the Qaazi from his side, she was not present at the place behind the curtain and she had not given her consent for the marriage as per the custom of the Nikaah and therefore, she is not his wife as per the law and the religion. However she adds that she will never leave him because his honour as well as the honour of his family is too important for her to take any such step and she will remain the ‘Bahu Begum’ of the household for the rest of her life. Sikandar, being a thorough gentleman and a nice person, is happy with this small consolation too and does not impose himself upon her as a husband. Suraiya is married off under the stewardship of her Bhaabhi, i.e., Zeenat, the highly respected Bahu Begum of the house. But the story gets another twist when Yusuf returns from outstation and comes to know that he has become a victim of his maternal uncle’s conspiracy against him. Deeply hurt to know that his sweetheart has been married to another person but not being able to accept the reality, he approaches Zeenat at the house of Sikandar Mirza. Zeenat tells him that though her marriage was not carried out in the complete sense and therefore she is unmarried in the eyes of the law and the religion, yet he should forget her as she will never compromise with the honour of Sikandar for the sake of her own pleasure. Their talks are overheard by Sikandar and then he makes a great sacrifice to unite the lovers and ensure that they live happily together without the world’s knowing the truth.

Jan Nisar Akhtar has written a very good story but the director M. Sadiq has allowed the movie to become excessively long and less impressive than it should have been. The complete milieu of the movie is fantastic (the art director has done an excellent job) but it appears to be unreal and this is more so with the characters which appear to be over the top. I don’t think that the Muslims ladies and gentlemen in the free India used to follow the style of talking and the mannerisms as shown in this movie. This is how a misleading picture of the Muslim community is presented to the audience. The same was the case with Mere Mehboob (1963) also but Mere Mehboob presented delicacy and passion of love in such a memorable way that the weaknesses of the script and the characters got overlooked. Bahu Begum focuses more on significance of the family honour and less on romance. The story is interesting and and the narrative is engrossing once you are in it. However, it could have been much better. 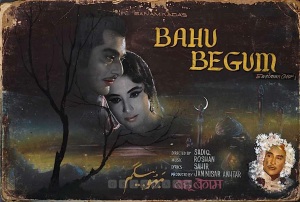 Despite being an eminent Shaayar in his own right, Jan Nisar Akhtar has hired the services of another eminent Shayaar Saahir Ludhiyanvi alongwith Majrooh Sultanpuri to write the lyrics of the songs. With the help of the meaningful and touching lyrics, Roshan has prepared memorable music for the movie. The best song (as well as the most popular song) of the album, in my view, is Hum Intezaar Karenge Tera Qayaamat Tak, Khuda Kare Ki Qayaamat Ho Aur Tu Aaye (sung jointly by Rafi and Asha) but the other songs Duniya Kare Sawaal To Hum Kya Jawaab Den, Nikle The Kahaan Jaane Ke Liye Pahunche Hain Kahaan Maaloom Nahin, Pad Gaye Jhoole Saawan Root Aaee Re, Log Kehte Hain Ki Hum Tumse Kinaara Kar Len, Dhoondh Ke Laaun Kahaan Se, Sirf Apne Khayaalon Ki Parchhai Hai and Vaakif Hoon Khoob Ishq Se (which is a Qawwaali) are no less than one another. All the songs of the album have not been kept in the movie though.

Performance wise talking, the best performer is undoubtedly Ashok Kumar who could dare to play a romantic lead at the age of 56 years. Meena Kumari in the title role and Pradeep Kumar alongwith others are so-so. Johnny Walker has done good comedy. A character-artist of that era – Musharraf has also generated laughs for the audience. Leela Mishra has also done well in the supporting role of the heroine’s Bua (father’s sister) taking care of the household and her young unmarried niece, i.e., Zeenat.

All in all, Bahu Begum is a decent watch which will definitely appeal to the lovers of golden oldies. It renders the pleasure of nostalgia, no doubt.