Rajshri Productions always made simple movies based on relationships. Most of their movies are having either Mumbai or the Northern Hindi speaking belt of India as the background of the story. However Taqdeer (1967) is a movie with a Goa-ni backdrop. This movie is based on a Konkani movie – Nirmon (meaning – destiny or Taqdeer). Director A. Salam remade Nirmon (1966) in Hindi by casting the same actress, Shalini Mardolkar in the female lead and Bharat Bhushan in the male lead. This movie is both moving and entertaining at the same time. A classic example of emotional cinema.

The movie is about a not so well-to-do nuclear family residing in Goa, consisting of the music teaching husband, the wife, two daughters and a son. The economic hardships make the head of the family to pick up a job on a ship. He leaves his very very loving family (for which his own love is no way less) and promises to be back at the earliest possible. The ship meets a sea-storm on its way and our protagonist, though escapes but gets hit by amnesia. The family behind him, shocked to hear about his death, now faces even more hardships and not able to make both ends meet. The starvation of the children has a breakdown effect on the wife and bowing before the destiny, she agrees to marry her husband’s rich friend who accepts her with her children. Within her heart, she is still in deep love with her deceased husband and the children are still missing their babuji (the lost father) but the reality is quite different now. Neither the mother, nor the children are happy among the luxuries now available to them because everything seems useless and soulless to them in the absence of the man who was the loving husband for the wife and affectionate father for the children. The head of their new family nowhere resembles him. He is a money-minded person, giving not a damn for any kind of sentiments. The fate (Taqdeer) which had set the ground for breaking of the family, again sets the ground for its reunion after many years when the man, living the beggar-like life of an amnesiac, suddenly regains his memory. Not able to resist meeting his family without any further delay, he rushes back to the native place, only to find how things have changed by just one stroke of fate. How the members of his lost family come in contact with him, how they recognise him and how the moving finger writes their reunion, is the remaining part of the film which is very interesting to watch.

Rajshri banner has made many movies about family bonds. However this movie, though belonging to a family and love within it, is not about family bonds. It portrays with elegance and perfection the one-to-one love between the family members. The love of wife for her husband and the love of husband for his wife on one hand and the love of father for each one of his children and the love of each one of the children for his or her father on the other hand is something I have never seen with this much intensity in any other movie. The individual emotions are intense and vivid but realistic at the same time. The upsurge of emotions after the beloved(s) is (are) lost is a rare treat for the viewers liking emotional movies based on relationships. The director has grasped the soul of the story while picturising it. Nevertheless, he is not lost in the emotional aspect only and he has made an engrossing movie which picks up speed post interval and the incidents one after another contribute to enhancement of the curiosity of the viewer as to what will happen next. Better sense has prevailed on the narrator as he has avoided the romantic tracks of the grown-up children and maintained the focus on the main broken family saga only. However there is a small comedy track inserted for the purpose of relief which is ok. The climax is impressive and the ending scene in which the reunited family leaves the rich mansion and moves back to their old, small, ordinary house full of their delicate memories, is heart-warming.

The performances are all up to the mark. Bharat Bhushan was no longer the romantic hero at the time of making of this movie (1967) and he has performed the role of a mature father of three children very well. His love for his lost wife and his lost children appears quite real from his gestures. Shalini could do well because she had done the same role in the original Konkani movie also. Among the children, Sushil Kumar as the son and Kajal as the elder daughter have done well. Special mention is deserved by Farida Jalal, the youngest daughter whose love for the lost babuji was perhaps the greatest and the most intense. Farida Jalal is in her teens in this movie and she has played the author-backed role of the highly sensitive girl who is never hesitant to give her food to the starving children or the beggars, with perfection. Her personality and mannerisms are able to bring tears to the eyes of the sensitive viewers. Kamal Kapoor is the villain (the rich man marrying the widow) and this is the only movie in which I have seen him being entrusted with such a significant role (throughout his life, he has done insignificant sideline roles only) and he does not disappoint from the standards of the sixties for Bollywood villains. Jalal Agha and Subhash Ghai (yes, the now well-known director Subhash Ghai himself) have also played cameo roles in the movie and done well. I could not identify the actors playing the comedian and the Goa-ni family friend but they have done a fairly good job. The child artists playing the childhood roles of the daughters and the son have been marvellous in their performances. 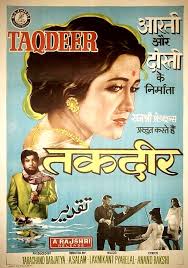 Music is the part and parcel of the soul of this movie. Laxmikant Pyarelaal has given hilarious music in Taqdeer. The classic – JAB JAB BAHAR AAYI AUR PHOOL MUSKURAYE has been played many times in the movie in the immortal voices of both Lata and Rafi. The other songs – PAPA JALDI AA JAANA and MUJHE BHOOL JAANA AGAR HO SAKE are also very good in their capacity. The title song is also good. The words of the songs are quite meaningful and closely associated with the sentimental story of the movie.

Goa is the backdrop of the story and the camerawork has been able to catch the beauty of Goa though no attention has been paid towards the life or the culture of Goa. The scene of Shalini circling in a whirlpool in order to display her emotional conflict and indecisiveness, is simply amazing. Considering the standards of the movies of the sixties, the length of the movie is ok. The art director has done a good job in creating the poverty-stricken small house of the family before the separation and its dusty, shabby condition after it is emptied by the family to move to the new family head’s mansion. 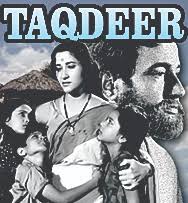 Overall, this black and white movie is a good watch not only for the sentimental viewers but also for them who are willing to watch it for sheer neat and clean entertainment. Just watch Taqdeer to see what happens when the love for the beloved is too strong to endure his loss.

5 Responses to On losing the beloved(s)