It’s been six years since the first and the real superstar of Bollywood had passed away. Rajesh Khanna took his last breath in Aashirwaad (his residence) on 18.07.2012. Fondly known as Kaka, Rajesh Khanna commanded an era in Bollywood, a short but unforgettable era during 1969-1971 (and somewhat into 1972). Just three years ! Yes, but the magic they created lasted forever. It is still there and makes us plunge into nostalgia time and again. The superstardom of Rajesh Khanna lasted for those three years but the aura created by him still continues.

Rajesh Khanna whose original name was Jatin Khanna, had to swallow the bitter sips of humiliation in the hands of the film-producers in his struggling days in Bollywood when the dialogue thrown at him was – Tum Kya Hero Ban-ne Ki Sochte Ho, Tumhaari Shakal To Gorkhon Jaisi Hai (how the hell you think of becoming a hero, you look like a Gorkha from your face !). However, the toil, the patience and the self-confidence of this young man showed colour when he was signed to play hero in a suspense thriller – Raaz (1967) which was also the debut movie of its heroine – Babita. However prior to Raaz, a unique movie produced and directed by Chetan Anand hit the screen whose uniqueness lay in the fact that an infant was its hero in the genuine sense. This movie which became the first released movie of Rajesh Khanna, was Aakhri Khat (1966).

Aakhri Khat and Raaz flopped. Thereafter Aurat (1967) and Baharon Ke Sapne (1967) also flopped. And the career of this promising young man was considered as finished by the experts in the field. However destiny had other plans. Shakti Samanta signed him for Aradhana (1969) opposite the great-granddaughter of Gurudev Rabindranath Tagore – Sharmila. And in no time, Mere Sapno Ki Rani became the national song and the hero performing on it the latest heartthrob whom young girls started writing love-letters to by using their blood in place of ink.

Shakti Saamanta followed Aradhana up with another blockbuster next year in the form of Kati Patang (1970) casting Rajesh opposite Asha Parekh. He completed his hat-trick of blockbusters with this hero through Amar Prem (1972) bringing Sharmila again to play the female lead in the movie. Amar Prem was a huge commercial success but was not critically acclaimed in that period. It took many years to acquire the status of a classic.

Amar Prem (immortal love) is based on a Bengali story – Nishi Padma penned by Bibhuti Bhushan Bandhyopadhyay which was made in Bengali also under the title – Nishi Padma (1970) only and directed by Arabinda Mukherjee with Uttam Kumar and Sabitri Chatterjee in lead roles. The same screenplay was used for Amar Prem also.

Amar Prem is the story of Pushpa (Sharmila Tagore) who is expelled from her Sasuraal (in-law’s home) and has to struggle a lot in her life. Finally, she has to take up the profession of a woman who sings privately at her home to entertain the gloomy visitors. This profession is seen by the so-called clean society as a dirty profession only and the women who take to it are seen in a degraded way. The place where Pushpa resides and professes is actually a Kotha, not a brothel. She sells her melodious voice to enable the aggrieved to find solace through that and does not sell her sexual favours as a woman. However the judgmental society is not ready to differentiate between the two. Males are interested in taking undue advantage of her whereas females are happy to look upon her with discard.

Among the visitors to Pushpa’s Kotha, there’s a tender-hearted businessman – Anand Babu (Rajesh Khanna) who is an alcoholic due to lack of peace in his family life. He and Pushpa come pretty close in the platonic way. There appears one more source of happiness and enthusiasm in Pushpa’s dry life in the form of a little boy Nandu who is the son of her neighbour (Sujit Kumar) and always remains distressed through the bad behaviour of his step-mother (Bindu). He does not stop visiting Pushpa despite being prohibited from his home for that because he is getting motherly love from that lonely woman.

Anand Babu’s family’s coming to know of his visits to Pushpa and Nandu’s family’s leaving the place snatch these small joys too from Pushpa and she falls lonely again. However, years later she happens to come across both Anand Babu and adult Nandu (Vinod Mehra) and her loneliness and agony ends at least in the dusk time of her life when Nandu takes her to his home as his mother.

There are many small characters too in this movie but mainly the movie is based on this threesome only, i.e, Pushpa, Anand Babu and Nandu. Pushpa is the soul of the movie and the spectator’s journey through the entire movie runs alongside her only. Anand Babu’s character is not essential for the main story but the thing is that it appears to infuse life into the dry narrative. It’s through him only that the significance of platonic relationships is underscored emphatically in the movie. Pushpa’s agony is felt only in part through herself. Partly, it’s conveyed through the character of Anand Babu and that’s the beauty of this movie and the relationship between the lead pair. Such relationships cannot be named or explained through words. They can be understood properly only when somebody is able to feel them. 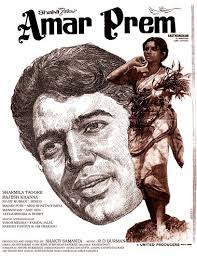 This is a highly sentimental movie but nowhere boring. Even if you are not able to relate yourself to Pushpa or Anand Babu, you are sure to like them as well as the movie. I personally endorse the relationship of Pushpa and Anand Babu because I know very well that two aggrieved persons are always able to share each other’s sorrow. A lonely person only can feel and understand other’s loneliness properly. And if the twosome is on the same wavelength, infatuation is bound to emerge. The confinement of marital relationship may block the path of the worldly union of a male and a female but it cannot block the exchange of solace and warmth between hearts which is generated through a relationship based on caring and sharing. 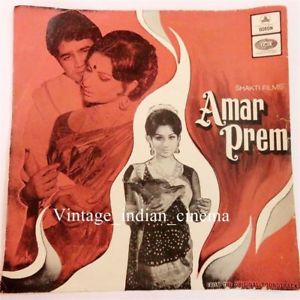 The Bengali society of the period of the story and the condition of women in that have been dealt with quite realistically in the story. And that’s why the movie also contains quite impressive and moving sequences. Every frame and every character of the movie makes you feel to be in Bengal. The complete ending sequence (when the reunion of Pushpa, Anand Babu and Nandu takes place) is a tear-jerker.

The unforgettable music of Amar Prem contains lyrics penned by Anand Bakshi and tunes composed by Pancham Da (R.D. Burman). It contains two memorable songs of Lata Mangeshkar – 1. Raina Beeti Jaaye, Shyam Na Aaye which is based on Raag Todi and 2. Bada Natkhat Hai Re Krishna Kanhaiya which is a touching song filled with motherly love. However the music of this movie is better known for three invaluable gems in the voice of Kishore Kumar – 1. Ye Kya Hua, Kaise Hua, Kab Hua, Kyun Hua, Jab Hua, Tab Hua, Ho Chhodo Ye Na Socho, 2. Chingaari Koi Bhadake To Saawan Usse Bujhaaye, 3. Kuchh To Log Kahenge, Logon Ka Kaam Hai Kehna. The last two songs can be counted among the best Bollywood songs ever composed and Kuchh To Log Kahenge was indeed considered as one of the best twenty Hindi movie songs ever composed in a survey by Outlook around one and a half decades back. It also contains Doli Mein Bithaai Ke Kahaar in the mesmerizing voice of S.D. Burman whose touching lyric has been penned by Gulzar.

Performances are also great. The supporting cast has done well, the child artist playing the role of young Nandu has delivered a heart-conquering performance and Vinod Mehra as adult Nandu is also up to the mark in his cameo. However, it’s the lead pair which has taken this movie to the heights even greater than it actually deserves. The character of Pushpa is the heart and soul of the story and Sharmila Tagore has delivered one of the best performances of her career in this movie. Her on-screen chemistry with Rajesh Khanna was amazing and that’s why she made one of the most popular on-screen pairs with him. 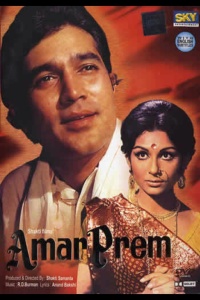 Rajesh Khanna is at his mannerismic best in this movie. His trademark jerk of the neck as well as the winking, peculiar dialogue-delivery, smile, style; everything is present here in the most loud way. And perhaps this was the peak of the success of his gimmicks which could go downward only after that. Anyway, in this movie, he is just lovable and it’s easy to understand why he was so popular. No other actor can be imagined in the unforgettable character of Anand Babu.

Rajesh Khanna’s demise reminds of Amar Prem’s ending scene in which Anand Babu waves his hand as goodbye to Pushpa and Nandu going in a rickshaw and the screen reads – This is Amar Prem.

Through the splendid joint effort of the art director and the cinematographer, the Bengal of that period has come alive on the screen. This movie is a treat to watch for lovers of golden oldies.

Kaka is no more but Anand Babu will live forever just like the cancer-patient Anand (in the immortal movie – Anand). Kaka’s time once passed, could not come back because as a song of his own movie – Aapki Kasam (1974) says – Zindagi Ke Safar Mein Guzar Jaate Hain Jo Mukaam, Woh Phir Nahin Aate. People have said a lot about Kaka’s failure in later years but I repeat for the departed soul – Kuchh To Log Kahenge, Logon Ka Kaam Hai Kehna …

6 Responses to Kuchh To Log Kahenge . . . A Tribute to Kaka