Is bloodshed mandatory for a revolution ?

We have heard and read a lot about revolutions. Several people especially those who follow the Marxist philosophy and support the cause of the proletariat against the bourgeoisie, maintain that a revolution has to be violent and contain bloodshed to be effective in bringing about the desired change in the system or to put it straight, of the system. It cannot afford to follow non-violence.

Well, most of the revolutions in the world have been violent only but usage of violence has its own dangers. That’s why the Father of the Nation of India, Mahatma Gandhi never advocated violence and maintained that to achieve pious ends, the means also should be pure. He firmly held the view that violence and bloodshed never solve any problem or bring about any meaningful revolution. ‘Win your opponent by changing his heart through your love and logical arguments and not by killing him. Eliminate hatred in his heart so that he comes over to your side and there remains no need for you to eliminate himself’, asserts Gandhiji. Yeh Zindagi Kitni Haseen Hai (1966) has been made on this theme only.

Yeh Zindagi Kitni Haseen Hai (how beautiful this life is !) narrates a story which appears to have been penned in the wake of the gloom prevailing in India after suffering the humiliating defeat in the hands of China in the war of 1962. The movie shows the clippings of Hitler and the world war II in the beginning and then declares that life is beautiful whereas death is horrifying and hence let’s worship life and discard violence and killings irrespective of our objectives and missions undertaken.

The story presents Mr. Gupta (Ashok Kumar) as the most popular politician of the region (akin to Jawahar Lal Nehru) who believes in reforming and replacing the existing system through peace and people’s constructive cooperation for the benefit of the whole society. His one time associate, Mr. Jolkar (Moti Laal) has left him and his party and launched his own political outfit because of the ideological differences between the two. Mr. Jolkar (akin to the communist opponents of Jawahar Lal Nehru in that period) believes in revolutionizing the system prevailing in the country by eliminating those who oppose any such change. He opines that violence is acceptable (and sometimes required) to meet the desired ends. He feels that Mr.Gupta is the biggest obstacle in his path of gaining political power and thereby bringing his desired system into reality and hence he decides to arrange his murder.

A very intricate scheme is made by Mr. Jolkar and his associates to eliminate Mr. Gupta. A young and dedicated worker of Mr. Jolkar’s party – Sanjay Malhotra (Joy Mukherjee) is assigned the job of first entering the household of Mr. Gupta, piercing his security and then kill him. However piercing the strong armor of security covering Mr. Gupta is not that easy. To ensure that, Sanjay uses the secretary of Mr. Gupta (Saira Banu) who is already in love with a member of their party. She is made a pawn in this dangerous game because a look-alike of herself has been spotted by Sanjay and his companions. This look-alike is the princess of an erstwhile princely state whom Sanjay traps in his fake love and then schemes to substitute Mr. Gupta’s secretary with her to ensure his entry to Mr. Gupta’s residence through herself only.

Though Sanjay is able to trap the princess in his fake love and make her dance to his tune and thereafter enter Mr. Gupta’s house along with her by posing himself as her fiance, everything does not go according to his plan and not only he realizes the heinousness of the crime he’s about to perpetrate but also first, he has to run for his life and then he finds himself trapped in the charge of the murder of another worker (a female) of Mr. Jolkar’s party. The climax contains a highly emotional tone with Mr. Jolkar’s realization of his treading the wrong path. 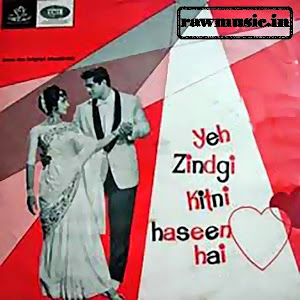 Pious intentions do not necessarily lead to pious results in case the correct things necessary to execute them are not done. Exactly this has happened with Yeh Zindagi Kitni Haseen Hai. The movie starts very impressively with the declaration of the futility of violence along with showing the black and white clippings of Hitler and the scenes of the world war II and soon after the credits are over, a murder takes place and sets the momentum of the story with the display of the political heat between Mr. Gupta and Mr. Jolkar. The scene of Mr. Jolkar’s showing indifference to his daughter’s death while getting that news amidst his speech to the public, is damn impressive and underscores how insensitive people become when they believe in violence and violent means to meet their objectives. But !

But thereafter the movie proves to be a complete letdown on account of its poor, unimpressive and ridiculously unbelievable script. I do not know the origin of the theme as to whether it’s the own idea of the script-writer or lifted from somewhere. However the end result of his work is disastrous. 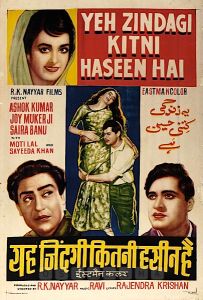 A major chunk of the narrative has been devoted to Sanjay’s implementing his scheme of trapping the princess in his fake love and then fill this wrong fact in her psyche that she is not any princess but the secretary of Mr. Gupta. It’s this part of the story which lets the complete movie down, making a mockery of the great theme picked for making this movie.
The prolonged climax showing a very emotional meeting of Mr. Jolkar and the princess in which Mr. Jolkar celebrates the birthday of his deceased daughter in the company of the princess, is the most impressive part of the story after the initial reels. Thus giving the movie the analogy of a human body, we can say that the head and the feet are in order whereas the complete middle portion is defective. These two (beginning and ending) portions of the movie are its face saving grace.

The scenes which are directly linked to the theme of futility and undesirability of violence are the most impressive ones. The scene of the sacrifice of the lead actress in one of her roles is able to move the audience deep within. How the committed party workers are brainwashed to be ready to sacrifice their own lives along with those of their near and dear ones for the so-called great cause has been shown effectively. 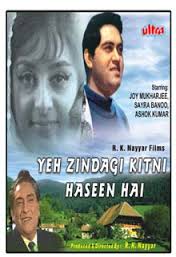 Ravi’s music along with the lyrics of Rajinder Krishan is overall good. The voices of Mohammed Rafi and Asha Bhosle only have been used. The best song is definitely the title song in Asha’s voice whose lyric is meaningful and touching.

It’s a color movie and the colors in the major part of the movie are quite bright and eye-soothing. Beautiful locations of India and abroad have been used for different scenes and the scenes are a treat to watch. The movie is not unduly long.

Director R.K. Nayyar (husband of the legendary actress Saadhana) could not draw praiseworthy performances from the lead pair. Despite being in double role, Saira Banu could not do much except looking beautiful (she was called ‘Beauty Queen’ in her heyday). Joy Mukherjee is over the top for most of time especially when he is trying to brainwash the lady for his vested interest (in fact, the vested interest of his party). It’s the seasoned actors of Bollywood – Ashok Kumar and Moti Laal who have delivered towering performances and thereby succeeded at least partially in hiding the deficiencies of the script. The supporting cast has done well.

A much better screenplay should have been written for the noble theme of the movie which is good in bits and pieces only. Even today if this theme can be picked up and a logical, coherent and taut script is written on that premise, a good director may be able to present a memorable movie with that. I wish I get an opportunity to make a movie on this theme.

Summing up, Yeh Zindagi Kitni Haseen Hai is a great opportunity wasted. However, courtesy some impressive sequences, some great performances, some good songs, beautiful locations and above all, the great theme; I recommend this movie as a decent one time watch to those who are fond of watching golden oldies.

Coming back to the question posed by me in the title of this review: Is bloodshed mandatory for a revolution ? My answer, just like that of the maker of this movie, is – No ! Revolutions or changes in the macro systems are permanent only when they are set in the psyche of the masses. Change of thought-process and approach towards things is mandatory for revolutions and not the shedding of the blood of those who do not appear to be on your side.

A Chartered Accountant with literary passion and a fondness for fine arts
View all posts by Jitendra Mathur →
This entry was posted in Movie Review and tagged Ashok Kumar, communist opponents of Jawahar Lal Nehru, Jawahar Lal Nehru, Joy Mukherjee, Marxist philosophy, Moti Laal, Movie Review - Yeh Zindagi Kitni Haseen Hai (1966), R.K. Nayyar, Saira Banu, Win your opponent by changing his heart through your love and logical arguments and not by killing him. Bookmark the permalink.

6 Responses to Is bloodshed mandatory for a revolution ?