Today is 30th June and exactly 17 years later, I am penning an unforgettable experience of my life in which my wife, my little daughter and my beloved scooter were my companions. In that period, I was posted at Rawatbhata, a town near Kota (Rajasthan) at the atomic power plant. The distance between Rawatbhata and Kota is about 50 kilometers. Though organization’s buses were going everyday from Rawatbhata to Kota, carrying the employees and their dependents, I used to derive pleasure in covering that distance through my scooter, driving through the topsy-turvy road passing through a jungle and small villages.

As the Summer vacations were ending, my wife, being a teacher in a school of the Govt. of Rajasthan, had to resume her duties on Monday, 2nd July 2001 and therefore, she had to catch the night bus from Kota to Jodhpur on 30th June 2001. Unfortunately, I forgot to book the seats of my wife and daughter in the organization’s evening bus going to Kota (called Mini Bus) and now no alternatives being available at that time, the acute problem of catching their bus for Jodhpur was staring at them.

The only solution left was to reach Kota through my beloved scooter which I have always considered my family member. For me, my Bajaj Super scooter has been no less than the personal plane of a multi-millionaire person. Having left with no other option, my family agreed for it though the weather was bad and slight rainfall had already started. Anyway, at 6.30 p.m, we started our journey with my wife sitting behind me and my little daughter sitting on the child’s tiny seat in front of me. 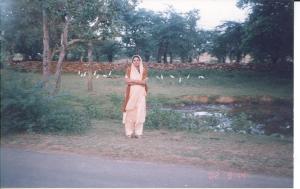 No sooner did we get out of Rawatbhata, then it began to rain heavily. Besides, since the path going through the forest area was dark and I had put the headlight on, mosquitoes were coming from all sides to disturb me and my daughter who was sitting in front of me. We used goggles but it proved comfortable for none of us. It was raining cats and dogs and my wife was cursing me like anything for not taking timely action to book their seats in the ‘Mini Bus’. But the journey was going on. Mosquitoes were disturbing me in driving in addition to the showers coming directly to my face.

However, my old faithful, the scooter did not stop even once despite the rain-water falling continuously on its body (and the bodies of myself and my family members too). My family members were fuming and fretting but I was enjoying the drive. It was a scary (because in the dark, wild animals could come out from the forest) but adventurous experience for me.

After the drive of around one hour, we were half-way from our destination and we reached a small village called Borabaas where tea-stalls were located on the roadside. I stopped the scooter and we had tea and snacks. After that small break, the journey got resumed with the scooter showing its full loyalty towards me (and my in-laws too who had given it to me in dowry). This time, my daughter sat with her mother, with myself handling the complete luggage in front of me by entangling it in the child’s seat. However we had to re-arrange the situation of the luggage and the passengers many times during the remaining part of the journey. Still, I was enjoying the drive because it was a unique experience not expected to be repeated in my life. 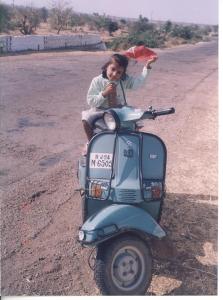 Finally, after remembering God thousands of times during the journey, we reached our destination exactly at 9 p.m. when the Jodhpur bus was just about to leave within a few minutes. We had a sigh of relief that my family narrowly escaped missing the bus. While leaving, my family was concerned about me because in that rainy weather and dark path, it was impossible to go back to Rawatbhata in the night. Anyway, I bade bye to them and hired a room in a hotel near the bus stand, parked my scooter in the hotel’s parking and slept just by enveloping my torso in the towel provided (because I did not have any clothes to change).

In the morning, I awoke at 6 a.m. after having an incomplete sleep of 5-6 hours. I was relieved to find that the rain had stopped sometime during the night and now the weather was clean. At 7 a.m. after seeing Lord Sun rising in the East, I left my hotel room and took my beloved scooter from the hotel’s parking. Thereafter I drove back to Rawatbhata without any hurry because that day (1st July 2001) was a Sunday and I did not have to attend the office. Enjoying the drive again, this time in the day-light and the clean, yet pleasant weather, I reached my home comfortably after two hours, taking a tea-break in between. At home, when I was relaxing, I thought about the preceding evening and got amused to remember that experience. ‘It was an unforgettable evening’, I thought. Yes, it was. That’s why, I still remember it, even after such a long time-gap.

A Chartered Accountant with literary passion and a fondness for fine arts
View all posts by Jitendra Mathur →
This entry was posted in Uncategorized and tagged 1st July 2001, 30th June 2001, Bajaj Super scooter, Borabaas, Rawatbhata, unforgettable evening. Bookmark the permalink.

12 Responses to That unforgettable evening