During the sixties, the world of Hindi cinema witnessed several movies which were originally family or social dramas alongwith the regular dose of romance and songs but a suspense angle was inserted in the later part to create a twist in the tale and thereafter though the movie continued to entertain the spectators but the source of that entertainment was changed to a mystery (almost always belonging to a murder) . Such movies if scripted and directed well, proved to be excellent entertainers and box office grossers. Today I am reviewing such a movie only starring super stars of that period – Dev Anand and Vyjayantimala. It’s Duniya (1968).

The story of Duniya starts with three children – Mala, her brother Gopal and their friend Amar. Amar’s mother (Sulochana) is a married woman but not able to live with her husband who has married someone else. The mother of Mala and Gopal (Mridula Rani) has sympathy for her and she is quite happy to see the love and affection among the children. Gopal has developed stealing habit through bad company and his mother is worried about his future. But Amar who is determined to become a lawyer upon growing up, is confident of helping his friend whenever he faces a trouble in life. Destiny separates the families and consequentially the children. Years later, Amar (Dev Anand) and Mala (Vyjayantimala) come across again and the childhood love gets reignited between them upon their recognizing each other. Things have taken such a turn in Mala’s life that after her mother’s demise, she has been fostered by Mr. Raamnaath (Balraaj Saahni) who is the public prosecutor in the city court. Amar is his son only but this fact is not known to either of them. Mala is ever concerned about her brother Gopal (Suresh) who has been missing for years. She is unaware of the fact that presently Gopal is serving a baddy, Mohan (Prem Chopra) as his driver under the fake name of Raam Singh. Mohan conspires with the old confident of Raamnaath – Girdhaari Laal (Nana Palsikar) to usurp his wealth and becomes his fake son (claiming to be through his estranged wife, terming her as dead now). Raamnaath, believing Mohan to be his son, engages Mala to him despite knowing very well that she loves Amar. For marrying Mala, Mohan ditches another girl. Further, Mohan’s smuggler friends want him to return the evidences of their smuggling business to them but he blackmails them on their basis. Besides, Gopal who recognizes Mala as his sister, is very sorry to see that she is going to be forcefully married to a baddy like Mohan. Thus, the scenario is this that so many people have their respective reasons to desire for Mohan’s death. Quite naturally, Mohan is a dead pigeon now.

And he actually gets murdered. Gopal is arrested for his murder and put under trial. Now Mala comes to know that Gopal is none else but her estranged brother only. She first seeks help from Raamnaath to save Gopal’s life. However Raamnaath who is still under the impression that Mohan was his son, is hell-bent upon ensuring the strictest punishment for Gopal through the court. Mala, therefore, goes to the shelter of her love, Amar who is also the childhood friend of Gopal. She appeals to his childhood friendship to do something to save Gopal’s life. Now the courtroom drama starts with Raamnaath as the public prosecutor and Amar as the defense counsel of Gopal. The murder mystery is resolved in the climax, Gopal is released and all the characters of the story who had been separated by destiny, get reunited.

Though the complete movie is entertaining, its most entertaining part is the court-room drama in which very interesting tussle takes place between public prosecutor Balraaj Saahni and defense counsel Dev Anand. Both of them are unaware that they are father and son and they try to outwit each other through arguments and evidences. The storyteller has inserted a very interesting twist in the script after the father’s recognizing his son which makes the narrative spicier. 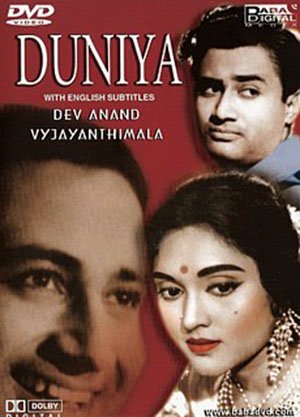 Prior to the mystery angle, the movie keeps the viewers engaged first through the sentimental social drama and thereafter the romance of the lead pair. These parts are also very interesting and do not allow any boredom to creep in. The romance of dashing Dev Anand and gorgeous Vyjayantimala has been given less footage but it tickles the romantic hearts through a few scenes and songs. The brother-sister track (of Gopal and Mala) is full of sentiments and forms an integral part of the story. Thus the movie offers something to all kinds of audiences. To be honest, the storyteller has done a superfine job and has been successful in keeping the viewer hooked from beginning to end. It’s the script of Duniya which makes it a winner.

Technically the movie is good. Though the comedy track of Johnny Walker is there in the movie, it has not been given undue footage and the length of the movie does not appear to be something objectionable to the viewer who finds every minute of the running time as interesting. Shot in the Filmistan Studio of Mumbai, the movie has an authentic milieu.

Performances are admirable. Dev Anand is present with his style and mannerisms which make up for his acting deficiency in intense and high tension scenes. An interesting trivia that I have noticed is that Amar was the favourite screen name for Dev Anand in his heyday as in many of his successful movies, he has been christened as Amar. Balraaj Saahni is the most impressive performer. Vyjayantimala is not only gorgeous but has acted well too. She is most effective when expressing her love and care for her brother. All others have done their bits to perfection.

Duniya is a movie in which all the entertainment formulae have been mixed in the optimum proportions. Hence the final product is skewed or tilted from no angle. It’s perfectly balanced and symmetrical. That’s why, it renders a complete satisfaction to the watcher. I unconditionally recommend it to the movie buffs of all categories.