First of all, I express my gratitude towards esteemed esteemed reviewer and blogger Sam Sammy (better known as confusedsoul in the virtual world) for penning a review of Special 26 (2013). I did not write the review of this movie because my thoughts and opinion might contain spoilers and reveal the suspense of the movie to the readers thus spoiling their enjoyment sought through this movie. Hence I chose to write anything about this movie quite late.

Special 26 or Special Chhabbis (a group of twenty-six specially chosen people) is based on the real life event of the loot of the jewelry showroom of Tribhuvandaas Bheemji Jhaveri in the Opera House of Mumbai (then Bombay) on 19.03.1987. The specialty of the loot was that the robbers had posed as CBI officers giving the loot the look of a CBI raid on the showroom, taking away jewelry worth millions of rupees in the shape of the forfeiture of the unaccounted goods. For this purpose, the real robbers had used 26 fake probationers of CBI, ‘recruiting’ them through a fake interview just one day before and telling them that that raid was a ‘practical test’ for them.

Popular Hindi novelist Ved Prakash Sharma used this incident in his suspense thriller novel – Jurm Ki Maa (crime’s mother) which was published in 1989. The novel depicts a very sharp-minded lady as the mastermind behind that fake raid who later gets caught by the same cop whom she had used as ‘the official help’ to conduct that raid. However the real life robbers were never caught. But this incident gave Neeraj Pandey, the filmmaker a plot to make a thriller movie which came in the form of Special Chhabbis.

Neeraj Pandey has shown that there is a group of four conmen who pose themselves as CBI officers or income tax officers and conduct sudden (fake) raids on the business houses and residences of corrupt govt. officials and ministers. The ‘confiscated’ currency notes and jewelry is their booty with which they vanish in the thin air sans the robbery being reported to the police because of its being black money. They are fond of slapping people also while conducting the raid nay robbery. And they are very much proud of this act of theirs too as if they were doing something laudable. Coming from different cities, they assemble only for this joint venture of theirs whenever it is planned by their leader – Ajay (Akshay Kumar). After such a raid at the residence of a minister in Delhi on the Republic Day of India in 1987, the matter reaches the real CBI and an honest and dedicated CBI officer – Wasim Khan (Manoj Bajpayee) starts trailing them. By taping the phone of one member of the gang – P.K. Sharma (Anupam Kher), he comes to know of a big robbery planned to be conducted in the jewelry showroom at the Opera House of Mumbai (Bombay) and also the drama of recruitment of 26 youngsters to use them as ignorant accomplices in this loot. But despite his knowledge of everything, the loot takes place. His team of 26 cops proves to be the Special 26 for the robbers (and not the recruits) which is used by the mastermind as the ignorant accomplice for the job. Instead of the showroom, the workshop of the owners gets looted where the jewelry of the showroom had been shifted by the real CBI.

First let me jot down the pluses of the movie in a nutshell (because their trumpet has been blown by several reviewers quite loud). The filmmaker has created the period of the eighties with almost perfection on the screen which is a great job and deserves high accolades. The performers have done exceedingly well especially Manoj Bajpayee who from every angle, appears to be a no-nonsense CBI officer. The movie contains good humour and Ajay’s demonstrating his quick-wit in an unexpected adverse situation is highly impressive. The director has maintained the momentum of the narrative throughout, keeping the audience hooked (with the exception of the utterly superfluous romantic track). It’s a very interesting movie, no doubt. Music is also good.

I have asserted in my review of 3 Idiots (2009) that sometimes the audience as well as the reviewers are carried away by the pluses of some movie in such a way that they simply overlook the minuses. The same has happened in the case of Special Chhabbis. Almost all the viewers and the reviewers (including me) got so much carried away by the entertainment value and bringing the era of the eighties alive on the screen that they (perhaps unknowingly) bypassed the minuses of this movie which are no less in number than the pluses.

The filmmaker has not bothered to explain the reason behind this robbery act of the characters except a (probably false) explanation furnished about Ajay’s failing to make it to the CBI years back which led him to become a fake CBI officer. Very less is told about the personal lives of these foursome except the family life of P.K. Sharma containing his wife and several children (mocking the norm of small family because despite their advancing years, P.K. Sharma and his wife are shown as going to have one more child). Besides, he has glorified the crime as if it were some noble cause and (undesirably) mocked the honesty of the real CBI officer in the end. The ladies in the lives of the foursome are shown as aware of their profession with no objection to it.

The real CBI officer shifts the jewelry of the showroom to the workshop, replacing it with imitation jewelry. Why ? When the robbers were going to be caught red-handed, what’s need for that ? When 26 fake CBI recruits were required due to the loot being huge this time, how could the foursome handle it on their own, leaving the so-called special 26 ones waiting in the bus ?

Neeraj Pandey had earlier made A Wednesday (2008) which was laudable because its theme was a common man’s declaration of war against terrorism at his individual level. However just like A Wednesday, he has tried to create an unexpected twist in the climax of this movie in order to give a shock treatment to the audience. However since in case of this movie, the story is a real life incident, he had to amend it to create the desired shock value. And that’s where the real flaw appears before the viewer after he has been entertained for more than two hours. This shock is less for the real CBI officer who has been made a fool by the conmen, more for the audience who has been fooled like anything by the filmmaker. It is revealed in the end that the cops who were posing as the ignorant accomplices of the con-gang are actually fake and their real accomplices. How can one digest it because the fake cop (Jimmy Shergill) himself brings the case to the real CBI and himself furnishes the identity and the Chandigarh address of P.K. Sharma (Anupam Kher) enabling the real CBI officer (Manoj Bajpayee) to tape his phone and thereafter trail and nail him ? This is as good as hitting axe on own foot. Besides, when the actual address of Sharma is known to the CBI, how can he escape now ? He has a very large family and establishment behind him. Just like Raju Hirani in 3 Idiots, Neeraj Pandey has also challenged the intelligence of his audience and fooled them. 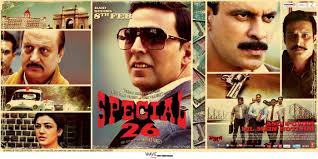 In no review of this movie (except the one on Koimoi.com) did I find this flaw of the movie being highlighted. What does it mean ? Do we enjoy being made fool just because the filmmaker has entertained us very much ? And is this why that instead of complaining, we start going gaga over the movie and singing praises for the conman, i.e., the filmmaker ?

2 Responses to Akshay fooled Manoj and Neeraj fooled the audience