Stone is the response to brick

Eent Ka Jawaab Patthar (when someone throws a brick at you, the best response is to throw a stone at him) is a Hindi maxim used for the expression of ‘Tit for Tat’ or to pay back in the same coin. An interesting Hindi movie was made with this title which I am reviewing today.

Eent Ka Jawab Patthar (1982) is a revenge saga with nothing extra-ordinary about it but this Bollywood potboiler has a taut script which consists of an engrossing courtroom drama and is duly supported by some admirable performances. I had watched it first when it was used to be telecast very frequently on Sony TV under the Cine Matinee time slot and recently I watched it on internet. Sadly, I found the internet version as moth-eaten with several scenes missing or shortened. And that’s why continuity jerks appear before the viewer watching this version.

Eent Ka Jawaab Patthar starts with the love story of Lakshmi (Neeta Mehta) who is the sister of a corrupt lawyer and who is also the Deewaan (a senior official working for the state, taking care of mainly the financial affairs) of the king of a princely state and Maadho Singh (Surendra Pal) who is a naval officer. Deewaan loots the treasure of the princely state by keeping the king unmindful of the happenings around through alcohol and the charms of a courtesan named as Rajni. Deewaan and his criminal associates work with a smuggler named as Sevak Raam (Premnaath) and a corrupt cop (Raza Murad) helps them. Finally, Deewaan and his associates not only kill the king by poisoning him through Rajni but also trap Maadho Singh who is after their smuggling activities, in a false murder case. Maadho Singh is sentenced to life imprisonment whereas Deewaan arranges the marriage of Lakshmi to the corrupt cop who is hand-in-glove with him in all his wrongdoings.

Maadho Singh flees from jail after ten years and then destiny makes him wealthy and capable to settle scores with his wrongdoers after further ten years. He re-enters their lives with a new identity and starts seeking his revenge. Nobody identifies him in his present get-up except his ex-flame Lakshmi who is now the mother of a grown-up daughter (Nameeta Chandra). Situation takes such a turn that her beau who is a fake prince (Adil Amaan) is trapped in the charge of a murder. Maadho Singh seeks the services of an honest cop (Amjad Khan) who was earlier a lawyer, to fight the case as the defense counsel of that innocent youth and during the hearing of this case, the twenty years old case in which Maadho Singh was the accused, also gets reopened. After a brilliant courtroom drama, Maadho Singh completes his revenge but gets killed in the hands of his ex-flame Lakshmi only.

The script of this revenge saga is studded with all the regular Bollywood formulae but still it is well-knitted and admirable, capable of keeping the audience engrossed. Plot-holes which are a specialty of all the Bollywood crime-thrillers, are there but skillfully written script keeps the viewer glued to the screen except for some useless songs which interrupt the flow of the narrative. The start-cast is B grade but the movie renders A class entertainment if we ignore its minuses including the songs, plot-holes and untied loose ends. Director Pachhi has handled the script well. The best part of the movie is undoubtedly the courtroom drama taking place in the final 30 minutes. 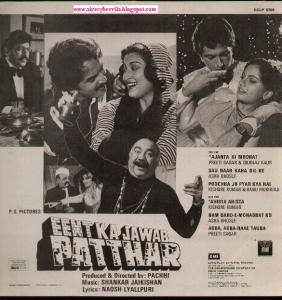 Shankar Jaikishan (Shankar only because Jaikishan had passed away long back) have delivered completely forgettable music and it is hard to believe that this is Shankar-Jaikishan’s music. It would have been better had many of the songs been removed from the movie.

Surendra Pal has done well in the lead role of Maadho Singh. He not only possesses a dashing personality but is also a good actor. He got famous by playing Dronachaarya in B.R. Chopra’s serial Mahabhaarat in later years and then became a character actor. He is one of those talented ones who don’t get the right break at the right time. Neeta Mehta has always been labelled as a B grade heroine but I never found her acting badly. Here also, she has done pretty well. Amjad Khan in a positive role is very impressive especially in the final phase of the movie. Legendary actor Om Prakash is also very effective in a meaty role. All the other supporting cast members as well as the villains including Premnaath are okay.

The ending scene of the movie in which Maadho Singh, in his dying moment, fills the hair-parting of Lakshmi, now a widow, with his blood, touched me like anything and left an indelible imprint on my heart (perhaps because I am a very emotional person).

I recommend this interesting movie to the regular entertainment-seekers as a one time watch.

2 Responses to Stone is the response to brick