Have you ever observed a spider weaving its web ? The peculiarity of its weaving is that once the web has been woven, the spider itself gets trapped in it and despite enormous efforts, finds it next to impossible to get out of it. And on most of the occasions, the spider concerned has to lose its life in that web only.

Filmmaker Yash Chopra and director Ramesh Talwar have used this analogy of spider’s web for crime world which a person may enter at his will but is seldom able to get out at his will. A smart criminal may feel elated and pat his own back for creating and developing his giant empire of crime but his effort is similar to that of a spider weaving its web and inviting its own doom. This is the theme of Sawaal (1982). 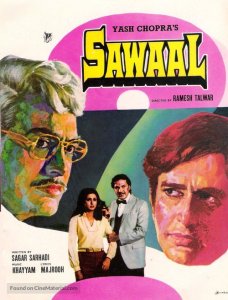 Sawaal (question) is the story of Dhanpat Rai Mehta (Sanjeev Kumar) who has developed his crime-empire with a lot of effort and is always able to get better of not only his rivals in this line but also the law-enforcing agencies through his wit and smart moves. His wife Anju (Waheeda Rehman) is aware of his real business which is of smuggling but his children – Vikram (Randhir Kapoor) and Sonia (Poonam Dhillon) are not.

The twist in the tale comes when Sonia falls in love with a cop – Ravi (Shashi Kapoor) who is after the smuggling gang running under the stewardship of Dhanpat Rai Mehta. First Mehta tries to get his daughter distanced from Ravi but when his son Vikram dies, he feels that he has lost enough on account of his criminal activities and he has to leave this world. Then only the truth dawns on him that he has followed the path of a spider and his destiny is no different from that of a spider.

The story of Sawaal is good and the reputed makers of this movie, i.e., Yash Raj Films have arranged a stellar cast consisting of Waheeda Rehman, Sanjeev Kumar, Shashi Kapoor, Randhir Kapoor, Poonam Dhillon, Swaroop Sampat (as Vikram’s sweetheart) etc. However firstly, not much labour has been done on the script which could not rise above the ordinary. Secondly, Ramesh Talwar’s direction is also average. These factors have reduced Sawaal to a run-of-the-mill crime-thriller. 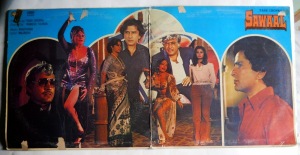 Technically the movie is okay and the production value is according to the repute of its makers. The story is not boring but unfortunately everything that comes before the audience is predictable. That dilutes the quality of the entertainment rendered. 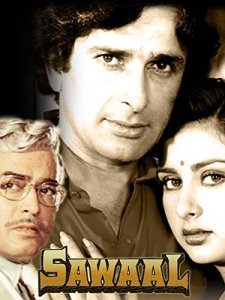 Khayyam’s music using the lyrics of Majrooh Sultanpuri is good but no song remains with the audience after the movie is over. 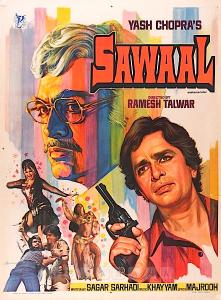 Waheeda Rehmaan, Shashi Kapoor, Randhir Kapoor, Poonam Dhillon, Swaroop Sampat and Prem Chopra, all the principal actors have done as per the requirements of the roles assigned to them. Interestingly, Poonam Dhillon had started her career with Trishul (1978) in which she had played the role of Shashi Kapoor’s sister whereas in this movie she has been cast opposite him only.

Finally, Sawaal is Sanjeev Kumar’s movie and he only is the heart and soul of it. The thespian has carried the entire movie on his robust shoulders. He is one good reason to watch this movie. His using the old Indian sayings to take decisions pertaining to his gang-activities, is quite impressive. 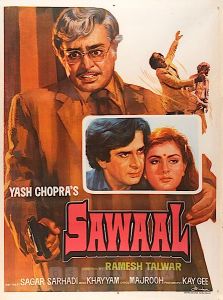 Summing up, Sawaal could have been an extra-ordinary movie but it couldn’t. However this formula-based flick is a decent one time watch. The fans of Sanjeev Kumar will definitely like it.